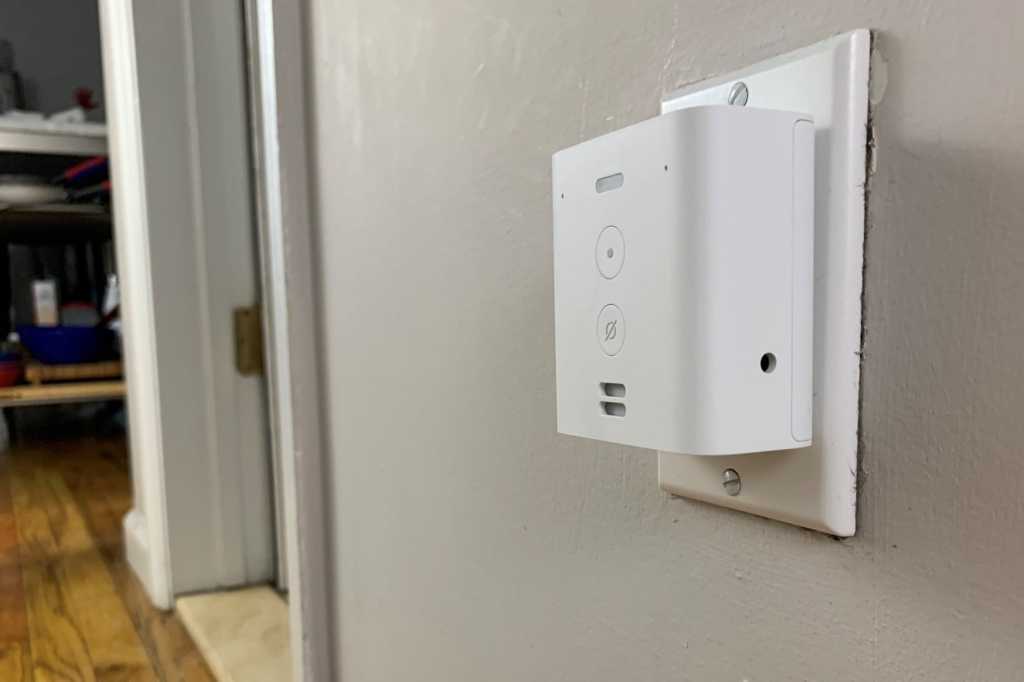 While it’s certainly no music speaker (nor was it intended to be), the compact, plug-in Echo Flex makes for a great way to put Alexa in places where other Echo speakers won’t quite fit.

While the compact and inexpensive Echo Dot makes for a great way to put Alexa in your bedroom, den, or home office, it’s not much help in a space with minimal or nonexistent shelf space, such as a kitchen counter, a hallway, or a tool shed. Enter the Echo Flex, a diminutive, squarish Echo speaker with an integrated AC power adapter so you can plug it directly into a wall outlet.

The Flex’s iffy audio quality isn’t suitable for music, but it’s perfectly fine for chatting with Alexa, while the integrated USB port lets you attach optional nightlight and motion-sensor modules. Best of all, the Flex’s $25 list price (which we’re already seeing discounted) makes it enticingly affordable.

Weighing in at 5.2 ounces and roughly the size of a USB wall adapter, the boxy, 1.75 inch-thick Echo Flex (not counting the two rear AC prongs) is, from a design aspect anyway, a far cry from the fabric-covered Echo Dot. While the Dot looks right at home on a bookshelf next to family photos, the utilitarian Flex looks like it belongs in a toolbox; indeed, it’s a perfect example of form meeting function.

On the front of the Flex are the standard Echo “Action” and mic-muting buttons, with an indicator light above them that illuminates when Alexa is listening, along with a pair of flanking microphone holes. Beneath the buttons are two small speaker ports, while a 3.5mm line-out jack sits on the right side of the unit.

Those are essentially the same controls you’ll find on the Echo Dot, with a notable exception: there aren’t any volume controls, which means you’ll need to ask Alexa or fiddle with the Alexa app to adjust the Flex’s volume. (Then again, I can’t remember the last time I actually touched the volume buttons on my Echo Dot.)

Look on the bottom of the Flex and you’ll find its USB Type-A charging port, which can supply up to 7.5 watts of charging power for a smartphone or other compatible device. The USB port also acts as a socket for snap-on third-party modules that add functionality to the Flex. For now, two are available: a motion sensor and a smart nightlight. These cost $15 each (you can also buy them bundled with the Flex). When plugged in, the modules add about an inch to the Flex’s overall height. I tested the Flex with the motion sensor (which I’ll discuss in greater detail momentarily), but I did not try the nightlight.

One feature that is missing from the Flex is a passthrough AC socket, which means you’ll essentially lose a power socket when you plug the Flex into a wall outlet. That could be an issue in, say, a kitchen, particularly if you have the Flex plugged into an outlet above the counter where you might also plan on plugging in mixers, blenders, or toasters. At least the Flex doesn’t take up both sockets, so long as it’s plugged into the bottom one. You could also consider deploying a power strip or surge protector here (click this link to read about our top picks in surge protectors).

Still, the fact that the Flex plugs into any wall outlet without the need of a power cord or a flat surface opens up all kinds of interesting possibilities. Aside from the fact that it occupies a power socket that you might use for another appliance, it’s pretty neat to have Alexa at your beck and call above the kitchen counter, on a workshop wall, or even in a hallway, all places where a larger smart speaker won’t fit.

Getting the Flex up and running is effortless if you already have Echo speakers in your house. If you buy the Flex using the Amazon account that your home Alexa devices are registered to, the Flex should be able to connect itself to your home Wi-Fi automatically, with your other Echo speakers acting as “helper” devices for the connection process, no password required. The setup process worked flawlessly for me, with the Flex connecting to the Wi-Fi network within a minute or so after I’d plugged it in. Even if you don’t have any other Echo speakers at home, setting up the Flex is your first Echo device, you can set it up as you would any other Echo speaker using the Alexa mobile app.

As for the Flex’s optional modules, well, you just plug them into the Flex’s USB socket and they work, with Alexa discovering the modules automatically. Once you have a module plugged into the Flex, you can use the Alexa app to rename the module (“Kitchen motion sensor,” for example”) or add it to routines, or you can simply ask Alexa to control it (“Alexa, turn hallway nightlight on”).

One you get over the boring design and crappy sound quality of the Echo Flex (we’ll discuss the Flex’s audio in more detail momentarily), you’ll start to realize that the Flex can do pretty much anything that an Echo Dot can.

For example, you can ask Alexa to perform the usual range of duties, from checking on the weather and reciting sports scores to turning on your lights and enabling “Guard” mode (which makes Alexa keep an ear out for such suspicious sounds as breaking glass and wailing fire alarms).

As with an Echo Dot or any other Echo speaker, you can pair the Flex with an external Bluetooth speaker, or you can connect an external speaker using the 3.5mm audio jack on the right side of the unit. And if you need a moment of privacy, you can press the mic mute button, while the Action button lets you silence alarms or reset the device.

The Flex’s optional modules make the diminutive speaker even more useful. The smart nightlight module, for example, would be a clever choice if you plugged the speaker into a hallway outlet. For the Flex that I installed in my kitchen, I created an Alexa routine for its modular motion sensor to turn off my kitchen lights after 15 minutes of inactivity. (I could have also created routines to, say, turn on the kitchen lights whenever someone entered the room, with both daylight and nightlight modes; but in the end, I opted to keep it simple.)

As I’ve already mentioned, the Flex’s audio quality isn’t great as far as music’s concerned, and Amazon (to its credit) makes no bones about it, saying clearly in the product description that the Flex’s 0.6-inch speaker has “not been optimized for music playback.” Indeed, the audio quality of the Flex’s “mini” driver is akin to that of an AM radio or a walkie-talkie, and it makes the Echo Dot’s so-so 1.6-inch driver sound positively lush in comparison. If you really want to play music on the Flex, you’re better off pairing it with a Bluetooth speaker or plugging it into a wired speaker via the 3.5mm audio jack. You can also ask it to play music on another Echo device or a speaker group.

While the Flex’s puny speaker is nothing to write home about, it is decent enough—and loud enough—to make Alexa’s voice perfectly audible in say, a busy kitchen, even when you’re across the room. Just as importantly, the Flex’s integrated mics are sensitive enough to hear you while the refrigerator is humming or the faucet’s running. I also tried the Flex in a hallway outlet that was only a foot or so above the floor, and once again, Alexa had no trouble hearing me, even when I was standing several yards away and speaking in a quiet voice.

Now, if you have a blender or a table saw roaring away, or some other loud appliance running, all bets are off. I fired up the Cuisinart food processor in our kitchen and tried to wake Alexa, and she couldn’t hear even when I was practically shouting right in front of the Flex. If you want to chat with Alexa in the shed, you’ll need to turn the drill press off, first.

Speakers and microphones aside, the Alexa-powered Flex behaved precisely as my other Echo speakers do, diligently answering questions, obeying commands, controlling smart devices and sounding alarms, and its optional modules—or at least the motion sensor that I tested—worked exactly as promised.

While it’s certainly no music speaker (nor was it intended to be), the compact, plug-in Echo Flex makes for a great way to put Alexa in places where other Echo speakers won’t quite fit. We also love the Flex’s modular design, which allows for such add-ons as the night light and motion sensor modules, with (hopefully) more to follow. Setup is a breeze, and the Flex’s dual mics do a nice job of detecting your voice from across a room.