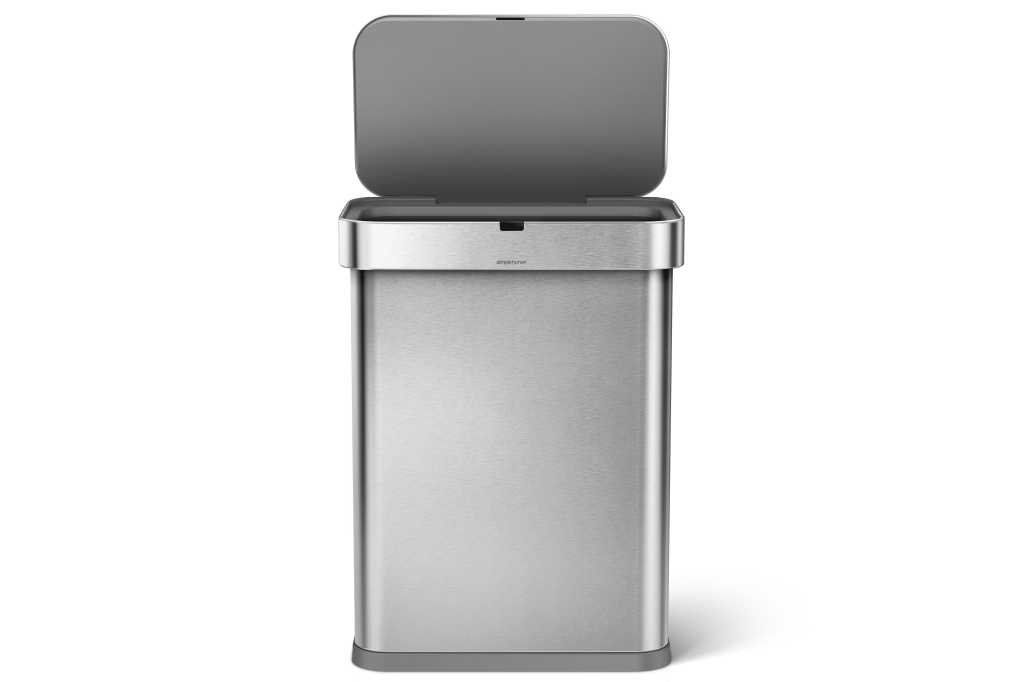 Image: Simplehuman
At a Glance

You talk to everything else in your smart home, why not your garbage can?

I control nearly every aspect of my smart home with voice commands: Lighting, security, door locks, my TV… even my garage door openers. But when the pitch to review the Simplehuman Rectangular Sensor Can with Voice Control popped up in my email, I thought voice control might have jumped the shark. I still don’t think I’d pay $200 for a trash can, but I’ve enjoyed living with this beautifully smart one for six months.

Simplehuman’s trash can is outfitted with three piezoelectric MEMS (micro-electromechanical systems) microphones, designed and manufactured by Vesper, that enable it to triangulate the source of a command while rejecting background noise. I found it to be about 95-percent successful at recognizing the wake word even while I was playing loud music in the room, and repeating “open can” wasn’t exactly a show-stopper when the can didn’t comply the first time. Vesper says its mics are designed to withstand contact with oil, water, beer, and dust; contaminants you can reasonably expect to find in any garbage can (although I wonder why wine, spaghetti sauce, and coffee grounds didn’t make the list).

Because the intelligence is onboard, you don’t need to also have a smart speaker in the house or connect the can to your Wi-Fi network. Simply say “open can” and the lid will lift, stay open for a few seconds, and then automatically close. You can also say “stay open” and the lid will remain open until you say “close can” (it will automatically close after 10 minutes if you don’t).

The can obviously needs electricity to operate, so I was happy to learn that it can be battery powered. Vesper has a technology optimistically dubbed “ZeroPower Listening” that “consumes virtually no power until turned on via a wake word.” In my experience, the can devoured the first half-dozen fresh AA batteries in a little more than a month with daily use. After that, I plugged in its AC power adapter and simply tolerated the thin cord snaking around the wall to reach the counter-height outlet at my wet bar.

The motor that opens the lid fits inside the can’s hinge and is remarkably quiet, opening and closing with just a faint whir. And if you don’t want to tip off your roommate or significant other that you’ve emptied yet another vessel, you can simply wave at the can and a different sensor will detect the movement and open the can without your saying a word.

Pretty, but not smudge-proof

In addition to being smart, Simplehuman’s trashcan is very attractive. My review unit came in brushed stainless steel, but you can order yours in white, rose gold, dark bronze, or black stainless steel. Simplehuman makes a lot of noise about its “nano-silver clear coat” that’s supposed to protect stainless steel from fingerprints and germs.

I didn’t do any lab analysis during my six months of testing, but the can’s surface certainly wasn’t immune to my 18-month-old grandson’s fingerprints, as you can see in the photo above. If you don’t have kids (or grandkids), the can should stay clean, since there’s no reason anyone should ever need to touch it, except to replace the liner (and you only need to put your fingertip on the bottom of the rim to do that).

The can’s rectangular shape, meanwhile, enables it to fit tighter against the end of a cabinet or counter than a round can would. And its 58-liter (15.3 gallons) rim lifts, so you can slip the plastic liner over the mouth of the can and then lower the rim to hold the liner in place. Lowering the rim completely hides the liner so it doesn’t spoil the can’s good looks. A box of extra bags fits in a pocket in the back of the can, which has a slot so you can pull a replacement bag up and through the inside of the can, much like a facial tissue.

Simplehuman’s liners are equally out of the ordinary—and not just for their size. They’re considerably thicker than ordinary bags, and I put them to the test by dropping nothing but empty beer bottles into one. The bag showed no obvious signs of strain when I lifted a full one out of the can; in fact, I dumped the bottles into a recycle bin in my garage, rinsed the bag, and reused it. I’m not usually that thrifty, but these liners are expensive.

The can is larger than typical, so you can’t use ordinary “tall” kitchen trash bags. Amazon sells an 80-count box of 13-gallon Hefty Ultra Strong bags for a little more than $12 (that’s about 15 cents per bag). A five-pack (100 bags) of Simplehuman’s Q-code bags sells for about $40 on Amazon—that’s about 40 cents per bag. A trial-size package with 10 bags comes with the can.

Speaking of recycling, Simplehuman sells another model of its Sensor Can that’s divided into two compartments. One side is for regular trash, and the other side hosts a removable plastic bucket (with a wire bail handle) for your recycling. The recycler version of the sensor can costs $250.

I suspect most people who can pull the trigger on a $200 voice-controlled garbage can are smart home fanatics, germophobes, obscenely rich, or some combination of the three (though I suppose the obscenely rich probably just pay someone else to deal with their trash). That said, paying an extra $20 for a voice- or gesture-controlled can is a perfectly reasonable premium over Simplehuman’s same-sized rectangular step can, whose lid opens only when you step on a lever at the bottom. While the novelty of saying “open can” hasn’t worn off after six months, I’m not sure I’d feel that way if I’d forked over $200 for it.