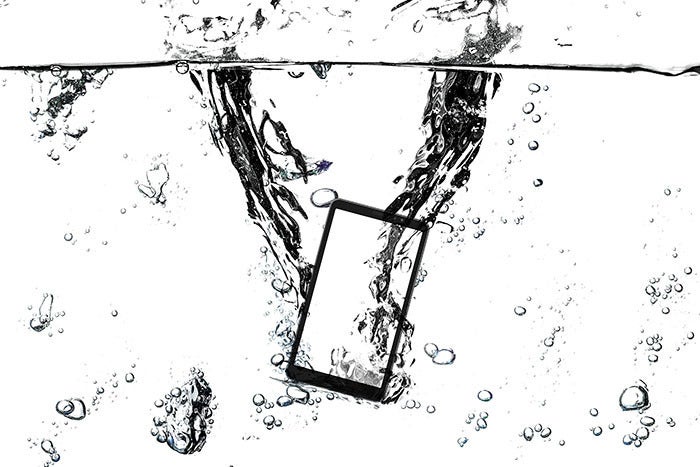 The letters IP stand for Ingress Protection; that is, the ability to stop elements such as sand and water from getting inside and damaging an electronic device. The symbols that follow IP—IP67, for example, or IPX7—indicate the level of protection that’s provided. You’ll often see these ratings in product advertising, on the retail box, and quoted in product reviews—including TechHive’s.

Lots of portable Bluetooth speakers are rated IP57. The first number references the size of foreign objects (e.g., particulate matter, such as dust) that will be rejected, and the second number rates the item’s resistance to liquid ingress. An “X” in place of either of those numbers (the first one, most commonly) doesn’t mean it offers no protection from that element, only that the manufacturer doesn’t claim a particular rating for it. More on that in a bit.

There are six values for resistance to particulate matter, and eight for liquid, so the highest possible rating is IP68.

X: Not tested. You’ll see this if the device was tested for liquids, but not solids; e.g., IPX7.

Note that the inches shown above are approximated for readability. Also, these are low-speed impacts. In no way does an IP rating indicate that a device is bulletproof or anything close to that.

3: Protected against water sprayed at an angle up to 60 degrees on either side of vertical. (Kids with a hose)

4: Protected against water sprayed from any direction shall have no armful effects. (rambunctious kids with a hose)

5: Protected against water projected in jets from any direction. (malicious kids with a garden hose with the spray nozzle tightened)

6: Protected against water projected in powerful jets from any direction (a pressure washer at a reasonable distance)

7: Can withstand immersion in up to one meter (approximately 3.3 feet) of water for 30 minutes. (dropped in the toilet, bathtub, or shallow end of a pool)

8: Can withstand immersion in up to three meters (approximately 9.8 feet) of water for an specified amount of time agreed upon with the IEC. (dropped into the deep end of a pool, near the shore, etc)

X: Not tested. We’ve yet to see this for reasons we’ll discuss below.

Practically speaking, only products that might be used near open water generally rate an IPX8 rating. And these ratings aren’t ironclad in the real world. Your brand-new IPX7-rated device might survive three meters at the bottom of a pool the instant you take it out of the box, but it might last 10 minutes or even just one minute after it’s gone through the rigors of daily use.

You’ll rarely encounter the letters that can come after the first two characters in an IP rating, but they are:

A. Protects the back of the user’s hand from access to hazardous parts.

B. Protects the user’s fingers from access to hazardous parts.

S. No motion was induced during liquid tests (device was static)

As for the logic of the X in place of the first letter: If a device can resist water ingress, it is also like to prevent ingress of particulate matter, such as sand or dust. Some vendors therefore rely on the customer’s common sense to avoid the expense of testing for non-liquid intrusion. That’s why a rating such as IPX7 is fairly common.

As mentioned, protection against intrusion by physical objects doesn’t mean that a unit is ruggedized against heavy blows, or that its internal electronics are shock-mounted for the same type of protection. The type of construction required for IP testing—not to mention the target audience—however, often dictates that your outdoor speaker is rugged enough for occasional rough handling. That’s not a guarantee, so don’t test the theory by backing a truck over your device. And that characterization definitely doesn’t include devices such as brittle-faced smartphones.

The long and short of it is this: higher numbers mean a better chance for survival, but you must take any device’s intended role into consideration. When it comes to speakers, the materials and techniques required to get a high IP rating make it difficult to deliver top-quality sound. I’m not saying it’s impossible, but take a listen and don’t buy anything solely based on its IP rating.

It’s also worth noting that IP ratings are the currently popular and sexy metric. You might also encounter a NEMA (National Electronics Manufacturers Association) rating, which covers more enclosure types and scenarios. That’s outside of this article’s purview, but you can read the standard at this link.