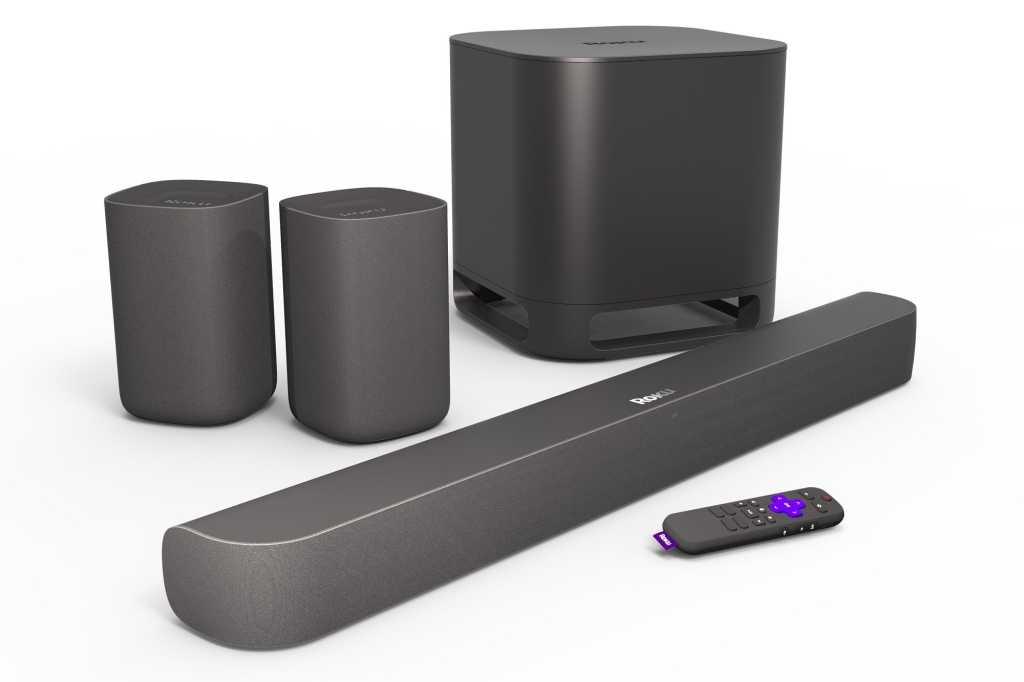 Next month, Roku will release a nifty update for the smart soundbar and subwoofer it released last fall: Owners will soon be able to pair those speakers with Roku’s existing wireless TV speakers to create a 5.1-channel surround sound system.

Unlike most soundbars, Roku’s doubles as a streaming video player akin to a Roku Streaming Stick+, providing both video and audio output when plugged into a television’s HDMI-ARC socket. Roku’s streaming remote also handles audio settings, so you don’t need  to juggle a separate remote to enhance dialog, reduce loud sounds, or boost bass levels. An on-screen menu system guides you through pairing the subwoofer and satellite speakers, and with the new surround setup, you can up-mix stereo audio to surround (for movies and shows) or sync audio evenly across the front and rear speakers (for music).

This kind of system could become the next big battleground for streaming media platforms such as Roku, Amazon Fire TV, Apple TV, and Android TV. Budget 4K televisions are readily available for less than $500 now, including ones that support advanced HDR formats such as Dolby Vision and HDR10+, and you can get streaming players to match for less than $50. Unless you plan to be on the bleeding edge of TV resolution at 8K, the next logical step is to make sure sound quality keeps up.

The problem with home theater audio

Having previously talked to companies like Roku, Amazon, and Google about their home theater audio ambitions, I know they’re all tackling the same problem: Upgrading from the cheap speakers built into most TVs is just too intimidating for non-nerds.

With so many companies offering their own combinations of soundbars, subwoofers, satellite speakers, and receivers, it’s hard to know where to start. And while HDMI-ARC (and the newly-upgraded eARC) are supposed to make setup simpler by letting a single HDMI port supply audio to all inputs; in practice, things can fall apart when you’re trying to string together a TV, an external streaming box, and an entirely separate sound system. I’ve heard from readers who struggle with audio latency, or are scratching their heads over HDMI handshake issues. And personally, I groan every time I need to grapple with the unintuitive remote on my Vizio 5.1 soundbar system.

While Roku’s smart soundbar might not appeal to audiophiles who are willing to tolerate  those inconveniences for a superior audio experience, it compensates with extreme ease of use for everyone else: A single device plugs into the TV for both streaming video and improved audio, and Roku’s software handles everything from optimizing audio quality to pairing extra speakers and subwoofers.

This approach, of course, makes sense only if your TV consumption mostly comes from a single input source. If you’re constantly switching back and forth between, say, the Roku soundbar and a cable box, you’ll still get the same soundbar audio, but without the convenience of Roku’s software to manage settings. That’s why this next frontier in streaming gear will mainly appeal to those who’ve already cut cable TV. It might even convince more folks to cut the cord in the first place.

State of the speaker systems

Beyond just Roku, other streaming platforms are also trying to simplify home theater audio, albeit with mixed results.

Amazon and Google have both worked with existing audio companies to build their respective Fire TV and Android TV software into soundbars. Reviewers on Amazon, however, have dinged the Anker Nebula Fire TV Edition soundbar for poor sound quality (TechHive’s own review is in progress), and while the JBL Link Bar with Android TV sounds great, it struggles as a streaming player.

Amazon has also been building an extendable system on its own through Alexa Home Theater, which allows users to pair certain Fire TV devices with Amazon’s Echo speakers. A pair of Echo Dots or an Echo Studio, for instance, can sit by the television, while an Echo Sub can provide deeper bass. The result is better-than-TV audio with powerful Alexa voice controls, but with some drawbacks: At present you can’t add rear speakers to make a 5.1 surround sound system, and you must use the clunky Alexa app to set everything up.

Apple has also dabbled in home theater audio through the Apple TV streaming box, which can connect wirelessly to any AirPlay 2 speaker for output. If you have a HomePod speaker in front of the TV, you can route Apple TV audio through it simply by holding the play/pause button on the home screen and selecting the HomePod from the audio source list. Through Apple’s Home app, you can even pair two HomePods together for a wider stereo effect. Still, Apple hasn’t yet created its own 5.1 solution, and unlike Roku, Apple TV doesn’t offer any audio enhancement options beyond a “reduce loud sounds” toggle in its settings menu.

Looking ahead, though, these companies all have a strong incentive to make audio a priority and work through those issues. Beyond just providing a better experience for cord-cutters, integrated home theater systems like the kind Roku is building will represent a powerful form of lock-in for streaming platforms.

After all, once you’ve invested in Roku’s soundbar, subwoofer, and satellite speakers, chances are you’re not going to be switching to a Fire TV or Apple TV anytime soon.