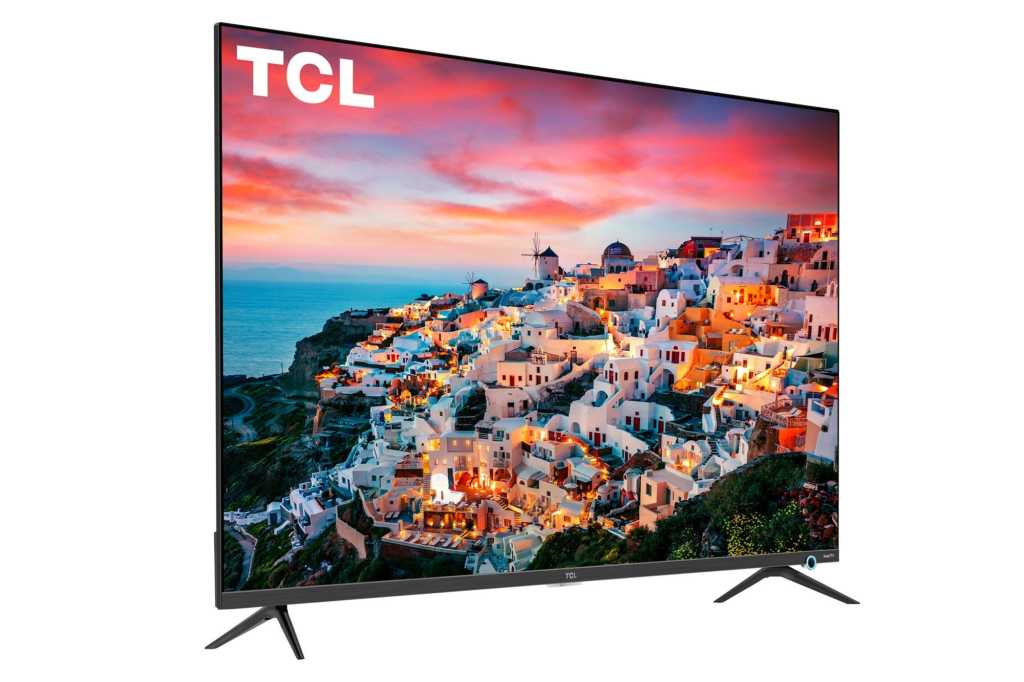 TCL
At a Glance

This is a heck of a deal for a secondary TV, or for those who aren’t as picky about picture quality as we’re paid to be. Note that the rating takes price into consideration.

The list price of TCL’s 43-inch TCL 5-series smart TV (model number 43S525) is about $500, but I’ve found it selling online for a mere $260. That, my friends, is practically larcency for a 4K UHD TV with Dolby Vision. And while its picture quality will never have you mistaking it for a QLED or OLED panel, the 43S525 delivers surprisingly good color and as much detail as 4K UHD TVs costing far more.

You can tell that the 5-series are budget TVs the minute you spot the legs, which attach via plastic screws rather than bolts. Once they’re on, no one will know; more importantly, that’s just about the extent of obvious cost cutting.

This is a 43-inch-class TV, meaning it has a 42.5-inch (measured diagonally) display that offers up 4K UHD resolution (3840 x 2160 pixels) at a 60Hz refresh rate. You can ignore the 120Hz “Clear Motion Index” touted on TCL’s website; that’s just marketing, not the actual hardware refresh rate. There is a gaming mode though, to cut down on latency and artifacts such as screen tearing.

This review is part of TechHive’s coverage of the best smart TVs,where you’ll findreviews of competing products, plus a buyer’s guide to the features you should consider when shopping.

Weighing in at a mere 18 pounds, the TCL 43S525 is not the thinnest TV we’ve seen, but it’s still only 3.1-inches thick, and that only at the bottom. The bezel isn’t super thin, either; but if you’re noticing the bezel while watching a movie, watch a better movie. The TV is edge-lit, which is par for the course at this price point.

Home network connectivity is provided via your choice of 802.11ac Wi-Fi and ethernet. There are three HDMI 2.0 ports with HDCP 2.2, including one that supports Audio Return Channel (ARC). Also onboard are a single USB 2.0 port for media playback only (keyboards and mice are not supported), analog video/audio input (via an included 3.5mm adapter cable), headphone/line-level audio output, an optical digital audio output, and a coax connection for cable/satellite TV tuner or an over-the-air TV antennea. All these ports are located on rear right-hand side of the unit. The power cord jack connects on the left-hand side.

The TCL 43S525 also will play back media files off USB storage devices and from your local network, although the latter requires the installation of Plex on both the TV and your server. I’ve suggested they hook up with the VLC developers as I’m not a fan of creating an account simply to stream video from my NAS box.

One weakness of this TV is that you can’t connect Bluetooth headphones or speakers (this model has no Bluetooth), only Roku speakers, which are useless outside of the Roku ecosystem.

Interfaces don’t really get any simpler or easier than Roku, and as with a Roku stick or adapter, there’s access to all the streaming content you could possibly want. Additional nice touches are input sensing and naming, and a decent channel guide.

The remote control is equally simple, and once you’re used to it, you won’t mind the lack of backlighting. It’s so easy, and everything is so obvious that honestly, you won’t need to look at much. Note that rather than being blank, as in the image above, the colored buttons are labeled with brand names for streaming services.

As I said, TCL’s 5-series TVs will never be mistaken for a Samsung Q90-series QLED or an LG E9-series OLED; but with the majority of material, it does quite well. My biggest gripe is the lack of motion compensation (smoothing of jerky action, which Hollywood despises for some reason), followed by some moiré in detailed pans, and then some vertical streaking as a white logo was displayed on a not-so-black background. But we’re talking about a $260 TV while I’m picking nits as I would with a $1,000 TV.

The TCL 43S525 did quite well in the majority of our tests, and handled all the movies I threw at it just fine, although it performed better with some than others. Put another way, if you’re easily irritated, spend more money. If you follow the axiom that good content makes you forget the TV (as I do), then you’ll adjust to the TCL 43S525’s foibles in short order. More likely, you’ll never really care. We’re pretty spoiled these days. That said ….

As I mentioned up top, the TCL 43S525 sports Dolby Vision, and that does help somewhat with HDR content. But there’s not a whole lot Dolby Vision can do on a TV that generates just 350 nits of peak brightness. Also, the edge lighting this TV uses means that black is much closer to charcoal gray. If you’re looking for laser blasts that make you jump, again, spend more money. You will see a slight uptick in highlights and contrast in content encoded with Dolby Vision, but not much. Standard dynamic range material works just fine on this TV.

I did, however, encounter an issue connecting to our company network via ethernet. I had no such trouble with Wi-Fi or a conventional home network. If you run into this issue, TCL says upgrading the firmware should fix resolve the problem. If you have no viable internet connection for the TV, use a computer and surf to this site to download the firmware to a USB drive and update the TV that way.

As with everything, the TV you buy depends on how much you want to spend. I happen to like 43-inch-class TVs, especially for smaller spaces. And for $260? Come on now. The picture is quite a bit better than what a much more expensive TV would have delivered just a few short years ago.

My only true nits are the lack of motion compensation and Bluetooth connectiviy. The other weaknesses, such as moiré, are shared by even expensive TVs to some degree. With motion smoothing and Bluetooth, the TCL 43S525 would likely be sitting in my bedroom right now.

This article was edited on 3/5/2020 to add information on the inability to connect Bluetooth headphones or speakers.