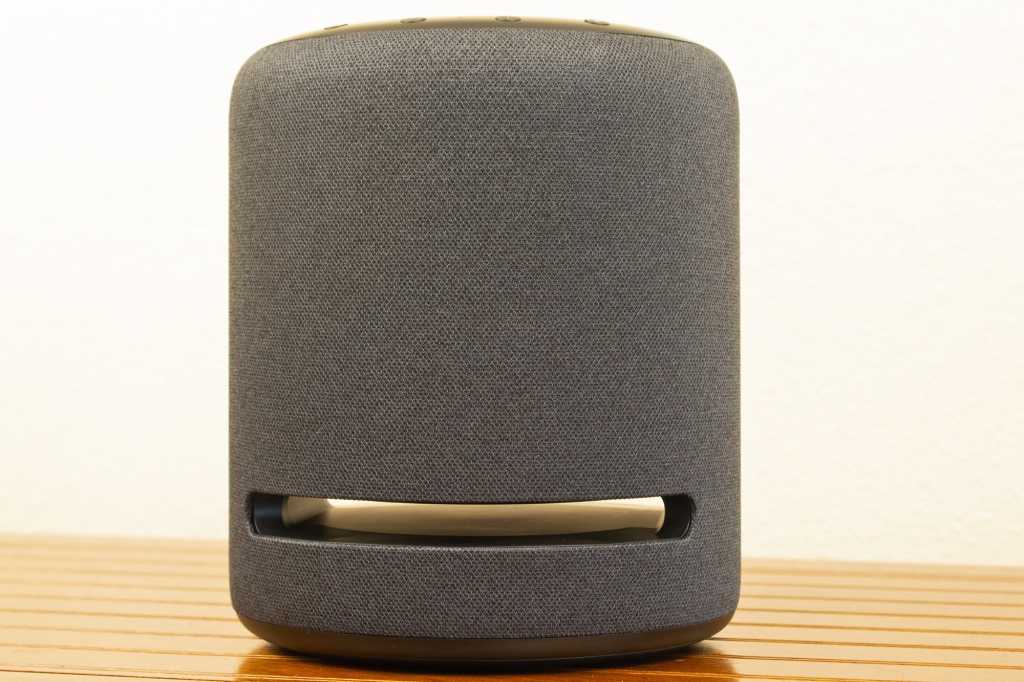 The Amazon Echo Studio is the best smart speaker you can buy for $200, but don’t buy one with the expectation that it will also be a great smart home hub.

If you have a house full of Amazon Echos, and you’re looking for a smart speaker that delivers higher fidelity, the $200 Amazon Echo Studio is a no brainer. It would be a fantastic speaker for the money even if it didn’t have a digital assistant (Alexa) and a smart home hub (Zigbee) onboard.

But what if you don’t have a house full of Amazon Echos? If you’re in the market for a high-fidelity smart speaker, and you’ve already settled on the Google Home ecosystem, stick with it and buy the Google Home Max. Yes, it’s more expensive, but its slightly superior audio performance justifies the price bump.

But this review is about the Echo Studio, so let’s discuss its attributes. The feature that sets the Echo Studio apart from not only most smart speakers but most powered speakers in general (soundbars excepted) is its support for 3D audio. Amazon achieves this in two ways: First, through the speaker’s hardware design (more on that in a bit); and second, by way of its support for the object-based audio formats Dolby Atmos and Sony 360 Reality Audio.

But before you jump on the 3D bandwagon, be aware that the only way to hear 3D audio with the Echo Studio today is with a subscription to Amazon Music HD, which costs $14.99 per month ($12.99 per month for Amazon Prime members). You’ll also want to know that the number of tracks encoded in either 3D format is limited. Amazon says it has “more than 50 million songs in High Definition (HD),” but it doesn’t disclose how many tracks are encoded in 3D.

I can tell you that you’ll find few entire albums encoded this way—apart from some recent releases from major artists. The record labels have picked hit singles for remastering, but they’ve left lesser-known tracks untouched. That’s fine for most people—who can name a Red Rider hit other than “Lunatic Fringe,” for example—but no band’s hardcore fans will be satisfied with what’s available. Most of the albums I sampled had a mix of 3D and stereo tracks. If you’re not a fan of Amazon Music, the Echo Studio is also compatible with Apple Music, Spotify, Tidal, Deezer, Pandora, SiriusXM, iHeartRadio, and TuneIn. But it bears repeating that 3D music is not available on any of those services at this time.

If you prefer streaming music you own (that you’ve purchased and downloaded, or ripped from CD and stored on a local server, for example), the Echo Studio can also handle all the more conventional audio codecs you’d expect, including AAC, FLAC, MP3, Dolby Digital, Dolby Digital Plus, as well as the less common Opus and Vorbis. Amazon outfitted the Echo Studio with an onboard DAC (digital-to-analog converter) that can decode tracks with up to 24-bit resolution at sampling rates as high as 48kHz. The speaker has a dual-band Wi-Fi adapter onboard (2.4- and 5GHz), and it also supports Bluetooth—but not the aptX or aptX HD codecs that deliver higher fidelity via that wireless connection.

The Echo Studio is outfitted with three 2.0-inch mid-range drivers (one firing left, one firing right, and one firing straight up) and a 1.0-inch tweeter that fires straight at the listener. A 5.25-inch down-firing woofer handles the lower frequencies, and is mounted directly above a slotted bass aperture (the cabinet is otherwise sealed—the aperture is not a bass reflex port). These speakers are driven by Class D amplifiers delivering combined peak power of 330 watts. Amazon says the Echo Studio delivers an impressive frequency range of 30Hz to 24kHz (no tolerance given).

The unusual driver configuration is designed to bounce sound off your room’s walls and ceiling so that you’re enveloped in sound, as opposed to having the music wash over you in waves. But your room’s configuration will, of course, play a significant role in the speaker’s ability to pull off this trick. If you have a wall on one side of the speaker, but not the other, or if you have a cathedral ceiling, the effect won’t be as compelling. I evaluated the speaker in my 250-square-foot home theater, which has excellent acoustics, and I found the effect enjoyable. When I moved the speaker into my larger kitchen, where the right and left walls are 20 feet apart (versus 12 feet apart in my home theater), the 3D effect was much less impressive.

I also observed that the surface you place the Echo Studio on has a significant impact on its bass response. After starting my listening test on a portable wooden table, I relocated the speaker to a much more substantial built-in floor-to-ceiling entertainment center, and bass response increased markedly as woofer-induced vibrations transferred from the bottom of the speaker’s cabinet to the furniture beneath it. Audio purists will look down their noses at this observation—you want to hear the speaker, not its enclosure or the surface it rests on—but I didn’t find it overly objectionable. I like bass.

That said, listening to the opening measures of Adele’s “Send My Love (To Your New Lover),” from her album 25, the kick drum had more the tenor of a tom-tom struck with a mallet than a proper bass drum. This was true whether I was streaming the track from Amazon’s service or listening to the version I’d ripped from CD and encoded in FLAC. But that was the exception to the rule; and frankly, I had much the same experience with the Google Home Max on this track. I had a very different experience with Donald Fagen’s “Tomorrow’s Girls,” from the Steely Dan front man’s album Kamakiriad. The Echo Studio’s overemphasized bass trampled the mix, particularly at the expense of Fagen’s vocals.

Most of the tracks encoded in 3D that I listened to sounded great in my home theater, but far more ordinary in the less-optimal conditions of my kitchen. The Doors’ “Riders on the Storm,” with its spooky thunderstorm sounds and Ray Manzarek’s jazz-infused keyboard work sounded magical with the 3D treatment, and the remastered 3D version of the Beatles’ “When I’m Sixty-Four” made me smile. Then again, how could it not?

Amazon’s citation of a peak power rating of 330 watts aside, I found that the Echo Studio got just loud enough to fill my home theater with sound. There was never any chance of it driving me out of the room, but it would stand up to a room full of partiers. You can also pair two Echo Studios for stereo audio reproduction, and if you want even more bass, you can add Amazon’s Echo Sub to the equation.

Zigbee is a fine smart home protocol, and there are also an increasing number of smart home products—especially smart light bulbs—that can be controlled via Wi-Fi, eliminating the need for a proper hub altogether. But our top picks in smart home hubs—including Samsung SmartThings and Amazon’s Ring Alarm—support all three of the most popular means of controlling smart home devices: Zigbee, Wi-Fi, and Z-Wave. There are just too many great smart home products equipped with Z-Wave radios to ignore that platform.

That said, any Echo smart speaker can be an essential accessory in a smart home, even if it doesn’t function as the central controller. In my own home, a Vivint Smart Home system controls my light switches, ceiling fan controllers, thermostat, smart locks, security cameras, garage door openers, and even motorized window shades. I can control all those devices with voice commands thanks to the Echo smart speakers I’ve sprinkled around my home. What’s more, I can do the same with some smart home products that Vivint doesn’t directly support—Lutron Caséta lighting and ceiling-fan controllers, Lutron Serena window shades, and multi-color Philips Hue smart bulbs—for example. In this respect, the Echo serves as a sort of lingua franca—a bridge linking the multiple smart home systems that I rely on, almost regardless of platform.

The Echo Studio isn’t an audiophile loudspeaker, but it is an awesome speaker for the price. In terms of networked smart speakers, the $200 Sonos One is the Studio’s closest competitor. It’s not nearly as powerful, but Sonos has the best multi-room audio ecosystem on the market, and Sonos offers a portable speaker—the Move—that Amazon has no real answer for. In terms of smart speaker chops, the Sonos One can be configured with either Amazon Alexa or Google Assistant.

The Google Home Max, meanwhile, offers higher fidelity than the Echo Studio, but it costs $100 more and isn’t a good fit for homes that have settled on Alexa as their digital assistant of choice.

Just don’t buy the Echo Studio if what you’re really looking for is a smart home hub. You’ll be better served by a stand-alone system that doesn’t cut you off from one of the most popular smart home ecosystems on the market.