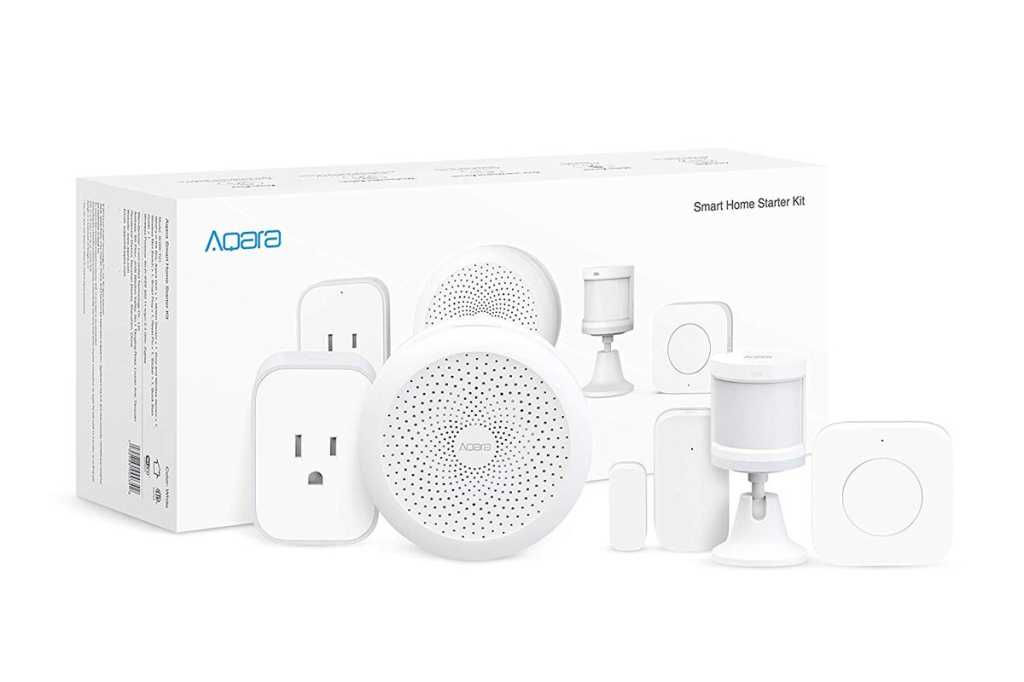 Aqara
At a Glance

The success of easy, all-in-one smart-home systems like SimpliSafe has led to a flood of competitors attempting to muscle into the market. These have achieved varying degrees of success, but they tend to have one thing in common: They’re dirt cheap.

Aqara is the latest brand to throw its hat into this ring, with its Aqara Smart Home Starter Kit. This Zigbee-based, Apple HomeKit-compatible system consists of five components. At the center is the Aqara Hub, a chunky disc that connects directly to wall power. As the brains of the system, the hub harbors a Wi-Fi bridge (2.4GHz only) and an onboard siren.

Two sensors—a door/window sensor and a motion sensor—are included in the box. You also get a basic smart plug and a single-button wireless switch that you can use for various control operations. The hardware is all utilitarian in design but surprisingly compact and unobtrusive. Only the oversized smart plug fails to fit in with the rest of the group.

Setup takes place through the Aqara Home app, though if you’ve got an Apple device handy you can also set things up with HomeKit. Aqara and HomeKit have a slightly rocky integration, and in my testing the Aqara app didn’t import any of my HomeKit settings (such as room names), nor did it incorporate other HomeKit devices on my network within the app. Conversely, the Aqara gear did successfully show up in the iOS Home app.

After walking through some simple setup instructions to bring the Hub online, Aqara proceeds to connect the sensors and other accessories automatically. This was something of a surprise to me, as I had yet to even remove the plastic tab that engages the batteries to power them up.

The app doesn’t even direct you to do this, but all the sensors (which are presumably pre-paired) nevertheless show up in the Aqara Home app. Once I powered up the sensors and connected the smart plug, everything became active in the Aqara Home app, successfully paired and ready to work. One oddity: Aqara also automatically paired a smart light bulb to my app—even though no bulb is included in the starter kit.

Aqara’s app doesn’t offer the most intuitive of interfaces, and it’s hard to tell at first glance whether its primary function is intended to be a security system or a more general system for controlling smart devices. The answer, of course, is both. Aqara wants to be a little bit of everything, telling you whether the door is open, how much light is in the room (there’s a luminance sensor built into the motion sensor), whether the smart plug is turned on, and whether the alarm is enabled—all at once. There’s not a lot of rhyme or reason to any of this, though if you don’t have too many sensors and accessories (the hub maxes out in supporting 32 anyway), it’s not difficult to get a sense of the system’s status at a glance.

Putting all of this to productive use is another matter, and it quickly becomes clear that Aqara has a lot of growing up to do, particularly as a security solution. Let’s start there, because the security features of Aqara are terribly undercooked. By default, Aqara sets up a rule that sounds the alarm if motion is detected or if the door/window sensor is tripped—which is a great start, but that’s really all it can do. There’s no timer system that engages the alarm after a minute when you’re leaving the house, and no keypad for visitors to disable the alarm when they arrive.

The included smart button is at least preprogrammed for use to turn the alarm on and off (as well as the smart plug, oddly, depending on the number and length of button presses), but this does not strike this reviewer as a feature that offers any level of real security. The siren is quite tame even at maximum volume, and the inclusion of various sound effects (such as “ghost calls”) feels frivolous rather than secure and comforting. There’s no battery or cellular backup feature, either: The whole system can be disabled by simply unplugging the hub. While Aqara does send push notifications, it should probably go without saying that there are no professional monitoring features available, either. As security systems go, it’s simply not much of a deterrent.

On the plus side, Aqara includes a curious, graph-based logging system for those looking to keep tabs on things. If you want to see when motion was detected, you can get an hour-by-hour look at activity and drill down from there to get specifics. A “smart logs” section, buried in the Profile tab, combines logs for all your devices into a single page if you really want more detail.

You can also leverage an if/then-based rules system to tie various components together. If you want to reprogram the button to control the smart switch exclusively, that it isn’t hard to do. Should you desire more complexity, Aqara sells a variety of additional types of sensors, including vibration, water leak, and temperature/humidity sensors, each for under $20. But it bears repeating that the hub can control only 32 devices. Alexa and Google Assistant support are also supposedly included, but Alexa was never able to find my Aqara devices in my testing.

For just $130, the Aqara starter kit compares favorably in price to competing gear from the likes of Abode and Simplisafe, and it’s a good value considering the number of sensors and accessories you get in the box. While it doesn’t merit a solid recommendation at present, particularly as a security solution, I do have some hope that future upgrades will at least teach it a few new tricks.