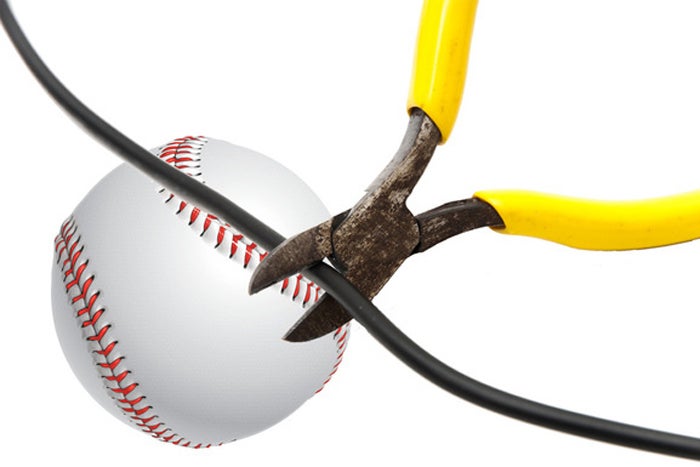 Here’s a harsh truth that every cord-cutting sports fan must live with: Chances are, the teams you want to watch are still locked up in bloated pay TV bundles. Whether that’s through traditional cable and satellite TV or through live streaming packages such as YouTube TV or Hulu with Live TV, you’ll pay for a lot of channels you don’t want just to watch the games you care about.

The reasons for this aren’t complicated. Most popular cable channels are owned by a small number of media conglomerates, which make more money by distrubuting all of their channels in bundles to TV providers. Because live sports are so popular, they have plenty of leverage to make sure those bundles command a high price. As a result, the cost of those packages keeps going up, even as viewership declines. And while I do think we’ll see an unbundling of sports over the next five years or so, for now it’s bundle or bust.

All of which hampers your ability to save money while cutting the cable TV cord. Although live streaming bundles are generally cheaper than cable and satellite TV packages, the savings potential with cord-cutting is much greater for folks who don’t care about sports and can abandon bundles entirely.

Having said all that, sports fans can still employ a handful of tactics to stretch their savings further. Here are some possibilities:

An over-the-air TV antenna alone won’t give you complete sports coverage, but if your reception is adequate, you can still watch sports for free in high definition on ABC, CBS, NBC, and Fox. This is a great option for folks who’ve opted out of big TV bundles, but still want to catch local football, the Super Bowl (which will also be streaming for free), the World Series, and other major events.

Our guide to choosing an antenna will help you figure out what to expect for reception, and our buying guide has advice on the best-performing antennas for the money.

Among live TV streaming services that include sports, Sling TV is by far the cheapest option. For $30 per month, Sling’s Orange package has ESPN channels covered, while Sling’s Blue package (also $30 per month) offers FS1, FS2, and regional NBC Sports networks in certain markets. You can also combine the Orange and Blue packages together for $45 per month, which is still $5 per month less than YouTube TV, the next-cheapest streaming option.

A couple things to keep in mind, though: Local Fox and NBC coverage is only available in a small number of cities, and Sling doesn’t carry ABC or CBS anywhere, so you’ll really need an antenna to pick up the slack. And if your regional sports channels are covered by Fox Sports, you won’t be able to get them through Sling at all.

Because live TV streaming services are much easier to cancel than cable, you don’t need to stick around all year. Instead, you can add service when your favorite team is playing, or drop in for a month just to catch the playoffs of a particular sport. You might, for instance, scale up to YouTube TV for your local baseball team in the thick of the pennant race, and then pare down to Sling or an antenna-only setup in the winter.

You don’t even need to wait around until the end of your monthly billing cycle to cut off service. Once you’ve paid for the month that covers what you’re looking to watch, you can cancel right away and keep watching through the remainder of the billing cycle.

Watching sports in real-time is part of the thrill, but if you’re willing to settle for replays, you might be able to avoid pricey pay TV bundles.

MLB TV, for instance, lets you watch any game 90 minutes after it finishes airing, including in-market games whose live feeds are blacked out. At $116 per season, it’s much cheaper than paying upwards of $50 per month just to access regional sports channels. The same goes for NFL Game Pass ($100 per season), which releases replays for day games in the early evening and night games immediately after they’re over. Unfortunately, you’ll need to wait longer for NHL TV ($150 per season) and NBA League Pass ($199 per season), with delays of 48 hours and 72 hours respectively for locally televised games.

Don’t forget about YouTube, either. The House of Highlights channel, for instance, recaps NBA games in less than 10 minutes on the same day they air, while the NFL hosts its own next-day highlights on YouTube. Those recaps won’t cost you anything extra; plus, you can apply the time saved to all those Netflix shows you never get to watch.

Though I’d stop short of suggesting piracy as a cost-cutting measure, password sharing occupies more of a gray area. Letting someone outside your household access your streaming accounts (or vice versa) might violate terms of service, but the practice probably isn’t illegal. And despite some public posturing, the TV industry isn’t rushing to crack down on password sharing, either. The only question is whether you’re unbothered by the morally dubious act of accessing content that’s not meant for you—and you know someone else who’s willing to enable such behavior.