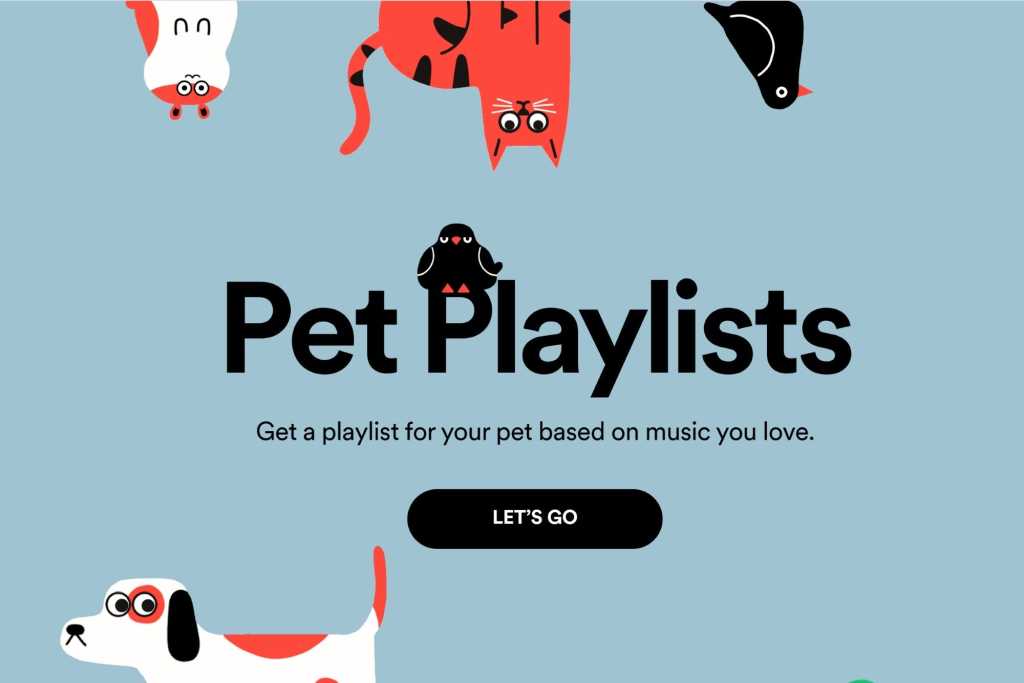 First came your daily mixes, then your top songs of the decade, and most recently your daily podcasts. Now Spotify is unveiling its latest playlist generator—this time, for pets.

The new Pet Playlists are “algorithmically created” and “based on your listening habits and your pet’s attributes,” says Spotify, tongue firmly in cheek.

Wait, is Spotify just trying to troll us? Perhaps, but we’re not going to look a gift horse in the mouth, so let’s get started.

First, you’ll need to pick a pet, such as a cat, a dog, a hamster, or a bird. Iguanas are on the list too, but no snakes or fish (“they don’t have ears”).

Next, you’ll have to answer a few questions about your pet using a sliding lever. Relaxed or energetic? Shy or friendly? Apathetic or curious? You get the drift.

Finally, you get to name your pet and upload a photo of your pooch, feline, or scaly four-legged friend.

Once that’s done, Spotify will do its magic, cooking up a playlist that “you’ll both enjoy.” While admitting that creating playlists for pets “isn’t an exact science,” Spotify says it worked with “experts” to come up with the “best approximation” of the tunes that pets would find most appealing.

I created a Pet Playlist for “Spot,” my fictional dog (our landlord doesn’t allow pets), and the mix was, well, not bad! The Doobie Brothers and “Old Town Road,” both in heavy rotation in our apartment, were present and accounted for, along with “You Take a Dog” by Kurt Lanham, “Laughing at the Moon” from David Darling, “Squirrel Hunters” by Special Consensus, and (of course) “My Dog and Me” from John Hiatt & The Goners.

In all seriousness, Spotify has been promoting its playlists—both those curated by humans and auto-generated ones based on your listening habits—pretty hard over the past several months, with podcast playlists being Spotify’s latest innovation.

The reasoning behind Spotify’s playlist push is obvious: the more you’re wedded to your daily mixes and favorite curated music lists, the less likely you are to jump to Apple Music, Pandora, or another streaming music competitor.

At its most recent quarterly earnings call back in October, Spotify announced that it had a whopping 113 million paid subscribers, versus the 60 million users subscribed to Apple Music as of last June.

That said, Spotify has yet to release subscription figures for the pet demographic.