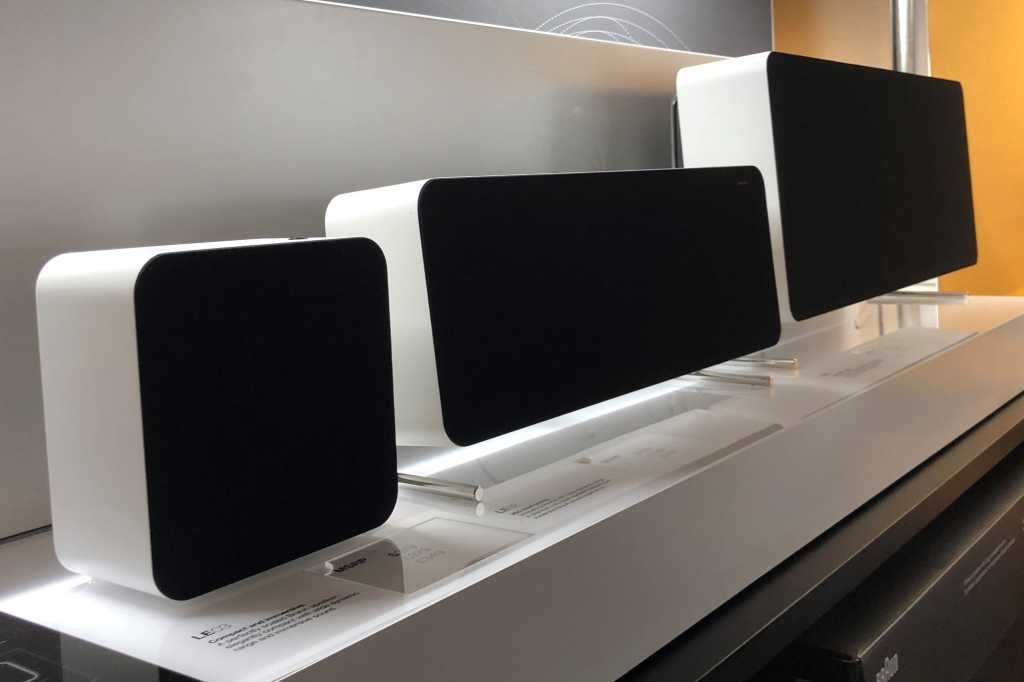 Mention the Teutonic brand name Braun and small kitchen appliances and electric shavers come to mind. But on the verge of its 100th anniversary, Braun is looking to reinvigorate its roots as one of Europe’s most prestigious audio brands, showing a line of self-powered smart speakers at CES last week.

It’s not doing it alone, however; Braun’s Frankfurt, Germany-based industrial design team has partnered with audio engineers at the British digital-radio company Pure International to resurrect the Braun audio brand—an effort that could extend to headphones, turntables, and more down the road.

The trio of Braun-branded speakers we saw last week hold true to the understated, ageless Bauhaus looks and immaculate, precision sound that made Braun a special favorite of both audiophiles and interior designers from the late 1950s through the early 80s. Some of the “form follows function” audio devices Braun manufactured during that era are so gorgeously minimalist and practical that samples reside in the permanent design collection of the Museum of Modern Art.

The top-of-the-line Braun LE01 ($1,199) very closely echoes the slim-line looks and upscale (aluminum and stainless steel trimmed) cabinet materials of its 60-year-old predecessor, the LE1, which was sold in stereo pairs. Positioned horizontally on its metal feet, optional stand, or a shelf, one of the new units can deliver stereo. Instead of the original LE1’s rare, electrostatic speaker panel driving the show, the new Braun LE01 and its smaller siblings—the mid-sized LE02 ($799) and compact LE03 ($379) speakers—spread the sonic wealth with interesting components from Tectonic Audio Labs.

Yes, there are both active woofers and passive drivers on board to extend the bottom notes below 800Hz. But the rest of the soundscape (above that point) is delivered by Tectonic’s interestingly concocted full-range Balanced Model Radiators. A BMR, the maker says, is a unique “flat diaphragm” speaker that delivers even sound pressure levels both on- and off-axis. It promises excellent voice intelligibility and preserves the overall sound integrity wherever you sit.

You’ll also find Tectonic BMRs in Bentley car stereos, speakers from Q Acoustics, and in the latest VR headset from Valve. “The key thing is moving the crossover action—done digitally—to below 800Hz,” explained Tectonic’s Neil Robb. “Most tweeters have their crossover point set between 1- and 3kHz. That’s just where voices ‘sing’ and the ear is most sensitive, so you’re hearing the gaps and phase distortion in the crossover spot, as demonstrated by the Fletcher-Munson loudness curve. If you move the crossover down lower in frequency, you move it out of the critical range.”

Hearing was believing in my brief test, as the team laid on classic speaker demo picks from Dire Straits (“Walk of Life”), Bill Withers (“Ain’t No Sunshine”)  Yes (“Owner of a Lonely Heart”)  Radiohead (“Everything In Its Right Place”) and Lorde (“Royals”). Everything precise, finely detailed, in its place, and natural. It sounded as though Lorde was standing right next to me.

These new Braun speakers feature Google Assistant and access to more than 100 music services, but the manufacturer doesn’t call them “smart speakers.” It would prefer consumers compare the new lineup to something from Bowers & Wilkins or Bang & Olufsen. We’ll see if that comparison is warranted as soon as we get product in for an in-depth review.