Like the idea of Google TV, with its Web browsing, applications, and powerful search, but don't want another box sitting around your TV? Then you'll love the new HDTVs that Sony unveiled at a press event in New York today. They incorporate the same Google TV functionality right in the TVs' electronics. 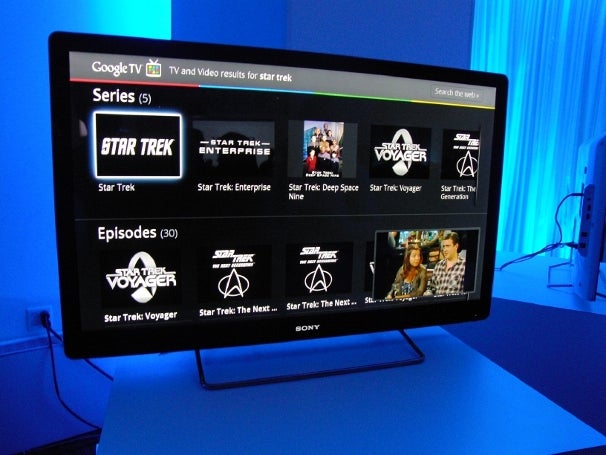 Sony's new TVs, whose screen sizes range from 24 to 46 inches diagonally, can access content via broadcast, the Internet and applications, just as the Logitech Revue, unveiled last week, can. Sony also unveiled a Blu-ray player with Google TV features.

At the event, Sony representatives argued that the appearance of the Google-powered TV sets marks a groundbreaking moment that will change the way the public watches TV. As technical achievements go, "this is a pretty big one," said Mike Abary, senior vice president of Sony's Home Division, who pointed out that the Sony units would be the only Google-powered TVs available this holiday shopping season. "TV and the Internet, together at last."

The Google TV navigation, on-screen menus, and results screens mirror the features seen in the Revue. While the Revue comes with a full-size or mini Logitech keyboard, the Sony Internet TVs have their own style of mini keyboard, which feels a lot like a game controller. It's not backlit, but accompanying the keyboard are two control pads: a touchpad on the right for navigating Websites, and a mechanical rocker-switch pad on the left for navigating when the set is tuned in to broadcast content. The rocker switch operates like the directional buttons on a DVD remote.

The controller is very lightweight and I found it very easy to learn and to manipulate. It has the feel of a PlayStation remote for a good reason. "Some design elements were borrowed from the PS3," Abary said.

This story, "Sony Debuts HDTVs with Google TV Baked In " was originally published by PCWorld.

Note: When you purchase something after clicking links in our articles, we may earn a small commission. Read our affiliate link policy for more details.
At a Glance
Related:
Shop Tech Products at Amazon