Verizon has a good thing going with its Droid branding for its lineup of Android-powered smartphones. The branding and advertising is distinctive (if, um, slightly disconcerting), and from all indications, the Droid-branded phones are selling well.

Perhaps the catchiest part of the ads is the robotic sounding voice that says "Droid" at the very beginning of the ads. If you have a Mac kicking around, though, you can re-create this catchphrase using OS X's text-to-speech features. All you need to do is open the Terminal in the utilities folder, enter the following command (via Twitter), and hit the Enter key:

Your Mac will say the word "Droid" using the built-in Cellos voice. As far as I can tell, the Verizon ads use the Cellos voice, though it may have been slightly altered in post-production.

If you want to kick it up a notch, you can save this statement-of-robotic-self as an audio file. To do so, you have two options.

One method is to use Automator. Open Automator (in the Utilities folder), and create a new workflow. Within Automator, do a search for the "Get Specified Text" action and drag it into the "Workflow" pane (the rightmost pane in the Automator window), and enter "Droid" into the text box for that action.

Next, do a search for "Text to Audio File," and drag that action into the Workflow pane. Change the System Voice drop-down to Cellos, and specify a file name and where you want the file to live. You should end up with something that looks like this: 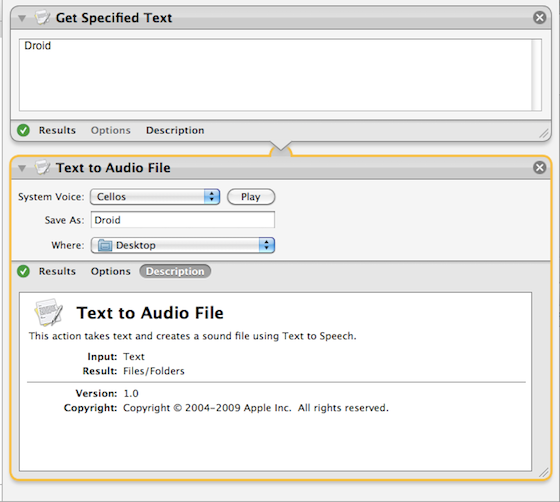 Finally, press the Run button in the upper-right corner of the Automator window; Automator will do its thing and spit out a .aiff audio file of the spoken text.

If GUIs aren't your thing, there's the Terminal method. Enter the following into the Terminal and press enter:

This will save an .aiff file of the spoken text in your Home folder.

From there, you can set this as your Mac's alert sound: Go to your "Home" folder, open the Library folder, and then open the Sounds folder. Drop the Droid audio file here. The next time you open the Sound pane in System Preferences, you'll have your ridiculously geeky alert sound.

This story, "Make your Mac Emulate the Verizon 'Droid' Robot Voice" was originally published by PCWorld.

Note: When you purchase something after clicking links in our articles, we may earn a small commission. Read our affiliate link policy for more details.
Related:
Shop Tech Products at Amazon