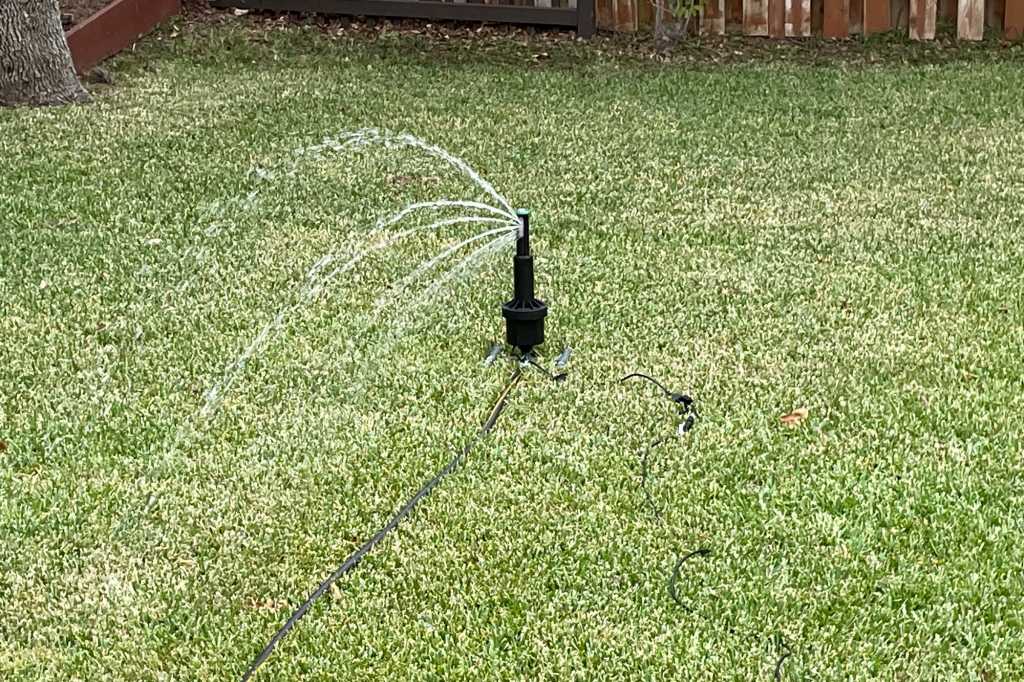 You’ll need to calculate if it’s worth replacing your entire sprinkler system with Irrigreen’s, but homeowners with major water-use concerns could find it hugely valuable.

As tested, $3,280 for a 5-head system. Actual price depends on system size, plus any installation costs.

Anyone with a sprinkler system knows at least a little of the frustration of waking up in the morning and finding puddles of water on a driveway, pathway, or sidewalk: wasted water that should have nurtured your lawn, trees, or flowerbeds. The Irrigreen Precision Sprinkler System applies precision engineering to that troubling and expensive problem.

The star of the show is a new type of pop-up sprinkler head based on the same design principle as an inkjet printer; Irrigreen co-founder and CTO Gary Kleinfelter helped pioneer the concept of inkjet printers and holds 35 patents on the technology. Each Irrigreen Digital Sprinkler is outfitted with 14 nozzles that can spray water with varying pressure to reach different distances. And these distances can vary as the sprinkler rotates in a 360-degree arc, so that water is applied only up to the edge of your lawn or flowerbeds and doesn’t reach areas that don’t need irrigation.

This review is part of TechHive’s in-depth coverage of the best smart sprinkler controllers.

Watching a YouTube video of an Irrigreen system in operation might explain how this works better than I can using words, but the concept is pretty simple: The homeowner uses Irrigreen’s app to map out the yard around the sprinkler head, setting the maximum distance they would like water to reach in each direction. Nothing but grass in one direction? Open things up all the way. Obstacle, fence, or the side of the house in another direction? Dial the distance back so that water only goes where it’s needed. The system remembers the relative water pressure that should be used as it faces each direction, and it responds accordingly during a watering run.

Before we get too deep into this review, however, you should know that unlike most (if not all) other smart sprinkler controllers, Irrigreen’s is a full nose-to-tail system that includes all the in-ground hardware and sprinkler heads. You can’t simply sub out an existing controller and use it with a standard system, nor simply replace existing sprinkler heads with Irrigreen ones. And while Irrigreen says its system requires far less hardware—250 feet of pipe and just 5 digital sprinkler heads, versus 1,500 feet of pipe and up to 40 conventional sprinkler heads for a typical yard—installing an Irrigreen system still means digging trench lines in your yard (or hiring a contractor to do it for you).

Since it wasn’t practical for us to evaluate an entire irrigation system on a temporary basis, at least not without Irrigreen sending a landscaping crew to my home, the company provided a digital sprinkler head that can be attached to a standard garden hose and used above ground. So, my experience obviously wasn’t the same as I would get with an in-ground installation, but it was close enough. And the software experience, including the mapping features, would be the same either way. Irrigreen didn’t provide much in the way of instructions as to how to set up the hardware—I suspect most of its customers acquire the system through landscape contractors—I was able to get it set up and running without too much trouble.

Besides, the software is where the magic is, and while I was flooded with errors and couldn’t get anything to work on the first day, Irrigreen said this was because the unit was probably in a maintenance mode as it downloaded updates. Sure enough, everything began working as expected on day two without intervention. (Some sort of notification of these updates would have been helpful.)

The system connects to your 2.4GHz Wi-Fi network, but it also has a cellular backup mode in case your broadband connection goes down. Wireless setup requires scanning a bar code on the rather industrial electronics case, and then walking through a few basic steps in the app. After identifying your watering zones, the system launches a calibration run to test your water pressure, which takes a couple of minutes.

At that point, your (or the contractor’s) next job is to map your yard. This is done via an interactive system that drops the sprinkler head in the middle of the screen and tasks the user with dropping pins in a circle around it. At each point, you can place the pin as close or as far away from the sprinkler as you’d like—at least up to the maximum throw of the sprinkler. This distance will be based on your available water pressure: Irrigreen indicates that 35 feet is roughly the limit; mine topped out at 24 feet.

Mapping your yard is intuitive and straightforward and—dare I say—kind of fun. While it doesn’t overlay atop an actual picture of your yard—which would be awfully nice, if difficult to pull off short of using custom aerial photos—it’s easy to see where you need to drop pins (up to 50) with a little trial and error. In my case, I wanted to work around a tree and a sandbox in one corner of the yard, and some planters on the opposite side. It took less than 5 minutes to work my way around the yard and dial in the water to spray within a few inches of each obstacle—which is why Irrigreen says its system “prints” water on the lawn.

Unfortunately, this portion of my yard (which I thought was rather small) was just a bit too large to be completely covered by a single Irrigreen sprinkler head. If I were to invest in the system permanently, I think two sprinkler heads would be needed in this area of my yard.

Once your yard is mapped, the hard part of setup is done. Irrigreen’s app lets you run manual watering runs, schedule runs based on time and date (including specific days of the week, even/odd days, and more), and features an automatic watering mode that uses internet weather data to adjust water use. There’s not a whole lot of information about how this auto-mode works, and the system proved to be a bit confused in my testing: On the day of a freak hailstorm and cold snap, the system said it “ran longer” due to “warmer weather” instead of skipping the watering run as it should have.

Over time, things fell more in line with ambient weather conditions, indicating that maybe this is a system that needs to run for a bit before it really finds its groove. You’ll find all this information tracked in a logging system that keeps tabs on watering activity, but details in this section of the app are scant and could use more information to help guide the user about what’s going on.

Note that you can also use the control box hardware—which disconcertingly amounts to a bare circuit board mounted inside a plastic box—to launch basic manual runs for a single zone or all zones—or to stop all watering—but the three buttons inside aren’t well labeled. Hang on to the (very beta) manual if you ever plan to open the box.

Pricing for Irrigreen depends on the size of your lawn and the number of sprinkler heads you need, and an online quote tool lets you parse out an estimate. For my lawn (estimated at about 6,100 square feet), Irrigreen suggested five sprinkler heads at a total cost of $3,280. Based on my testing, however, I’m confident at least eight heads would really have been required. Still, that’s not crazy compared to the average cost of a standard sprinkler system, which typically runs $500 to $1,000 per zone. For what it’s worth, my current setup has about 20 conventional sprinkler heads.

Is Irrigreen the best new way to irrigate?

While it’s promising today, I think Irrigreen has some growing to do. There’s no way to get push notifications about watering, for example, and there is no third-party connectivity to such common smart-home platforms as Alexa or Google Home, much less Apple’s HomeKit. The current hardware looks built more for the lab than a suburban home, and then there’s the cost of installation to consider.

It’s also difficult to verify the company’s claims that an Irrigreen system can save everyone 50 percent of the water spent on irrigation; but at the very least, its “water printing” concept does seem to deliver more precision and less waste when it comes to watering. Unless you’re keen replace your lawn with artificial turf, Irrigreen is worth keeping an eye on.