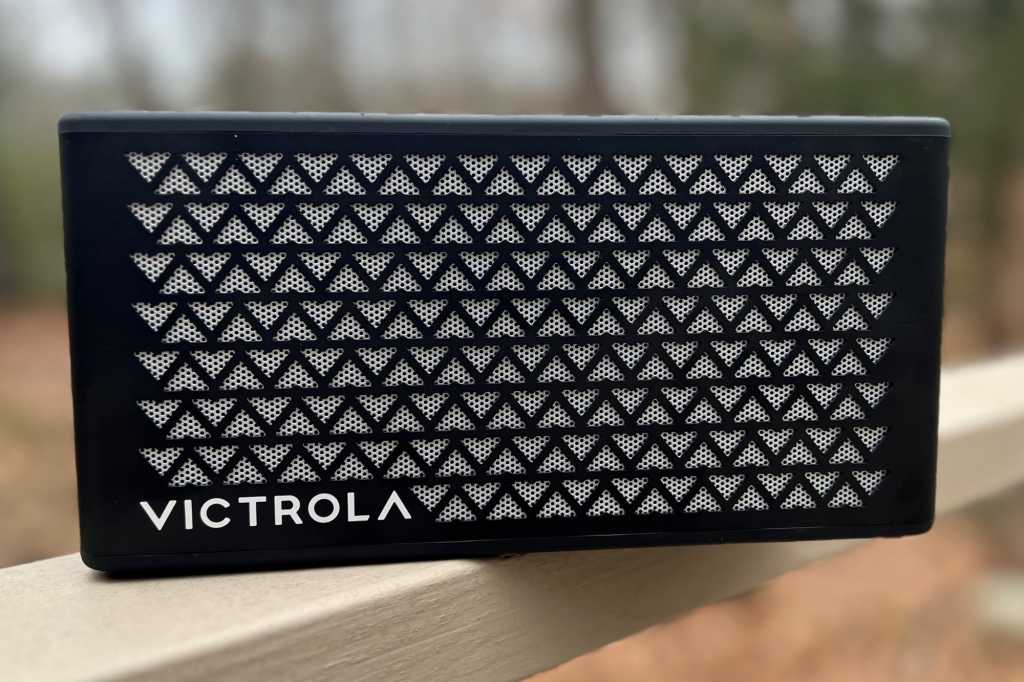 The Victrola Music Edition 2’s aluminum grille makes for an attractive and sturdy speaker, but the metal distorts the sound and makes for a far too bright listening experience.

Victrola is a reliable maker of entry-level turntables and record players, one that’s done a lot to promote vinyl to a new generation of listeners. After reviewing the Victrola Stream Carbon, an upscale turntable designed to work in the Sonos multi-room audio ecosystem, we’ve been looking forward to checking out Victrola’s new line of wireless speakers, including the Victrola Music Edition 2 Bluetooth speaker discussed here.

The Victrola Music Edition 2’s design echoes mid-20th-century table radios. While the corners are slightly rounded, it’s a purposefully bulky rectangle that makes a statement with a grill that echoes the “V” in the Victrola logo.

The sides of its enclosure are aluminum, while the bottom is a rubberized plastic panel that won’t scratch your furniture. The unit measures 9 x 3.54 x 4.41 inches (WxDxH) and weighs just over 4 pounds. It’s a solid piece of gear. The speaker comes with a USB-C charging cable and a USB-C wall charger, a nice feature in an era when too many manufacturers expect you to provide your own.

The top uses the same plastic material as the bottom and features the unit’s controls. The right-hand side features a multifunction button between the volume controls. A single multifunction button plays or pauses, a double press skips to the next track and three presses goes to the previous track. There’s a Qi charging pad in the middle, and power, charging and Bluetooth-pairing buttons are on the left. The back of the unit has a USB-C charging port and an aux input.

Inside, the speaker has a 3.5-inch midrange driver, a 1-inch tweeter, and a passive radiator to increase bass response. The unit connects via Bluetooth 5.0 and supports the AAC and SBC codecs, but none of the higher-resolution ones (e.g., aptX Adaptive or LDAC).

Surprisingly, for a speaker that features so much metal, the Music Edition 2 is  rated IP67 for protection from dust and water, which means it’ll both keep the dirt out and survive a drop in the pool (you can learn everything you need to know about IP codes at the preceding link). The unit promises 20 hours of battery life. I got more time than that during my testing, even though I was simultaneously charging my phone for a significant number of hours.

If you want to load a USB-C drive with MP3 music, you can plug it into the charging port and press the multifunction button three times to play tunes from the drive. The auxiliary port allows you to plug in a cassette player, iPod, or other old-school pre-Bluetooth device. You can pair multiple speakers to improve the speaker’s soundstage.

The Qi charging pad on top of the speaker can be finicky with newer iPhones, but that’s mostly because of the ever-growing camera bump on Apple devices. If you’re willing to turn your phone so that it’s perpendicular to the speaker and the camera hangs over one side, it’s far easier to get the charging to work.

When Victrola announced this speaker at CES in 2022, they promised an optional brown or black leather case designed to echo the cases that came with mid-century transistor radios. Sadly, those accessories seem to have been dropped, as has a blue version of the speaker.

Victrola hasn’t released an iOS or Android app for its Music Edition speakers, so you’ll need to connect via Bluetooth, play, and either enjoy or deal with the results. And while there are a lot of reasons to like this speaker, sound quality is not one of them.

Adjectives that came to mind while listening to it include “bright,” “treble-heavy,” “sharp,” and even “pointy.” There’s a harshness to the overall sound that I’ll attribute to that attractive aluminum grille. If Victrola had gone with a cloth or plastic grille for the Music Edition 2, its sound might have been as impressive as the rest of its design.

If you’re looking for great sound in this price range, check out the JBL Charge 5 and the Philips S7807. Both deliver incredible audio, even if their visual design fails to live up to the level set by the Victrola Music Edition 2. If you’re looking for something with those classic MCM vibes, the slightly smaller Edifier MP230 is an excellent choice.

Or you could turn to the smaller Victrola Music Edition 1 portable speaker, which costs $99.99. This unit is fabricated from the same materials, but it has a smaller 2-inch driver, loses the Qi charging capability, and is sized somewhere between a very thick transistor radio and a tall mass-market paperback. Interestingly, that smaller size (and the smaller aluminum grille) tempers the harshness you get from the larger speaker. The Music Edition 1 delivers a far better listening experience than the pricier Music Edition 2.

Should you buy the Victrola Music Edition 2?

The Victrola Music Edition 2 is a beautiful speaker, so if you think the better-sounding, less-harsh speakers mentioned above are ugly, perhaps you could be happy with it. As for me, I found its relentless brightness caused significant ear fatigue after 30 minutes or so, even when listening to news radio or audiobooks instead of music.

Given our experiences with recent Victrola turntables and all-in-one record players, we’ll continue to watch what the company does in the wireless speaker space. But we’ll count its Music Edition 2 as a swing and a miss.