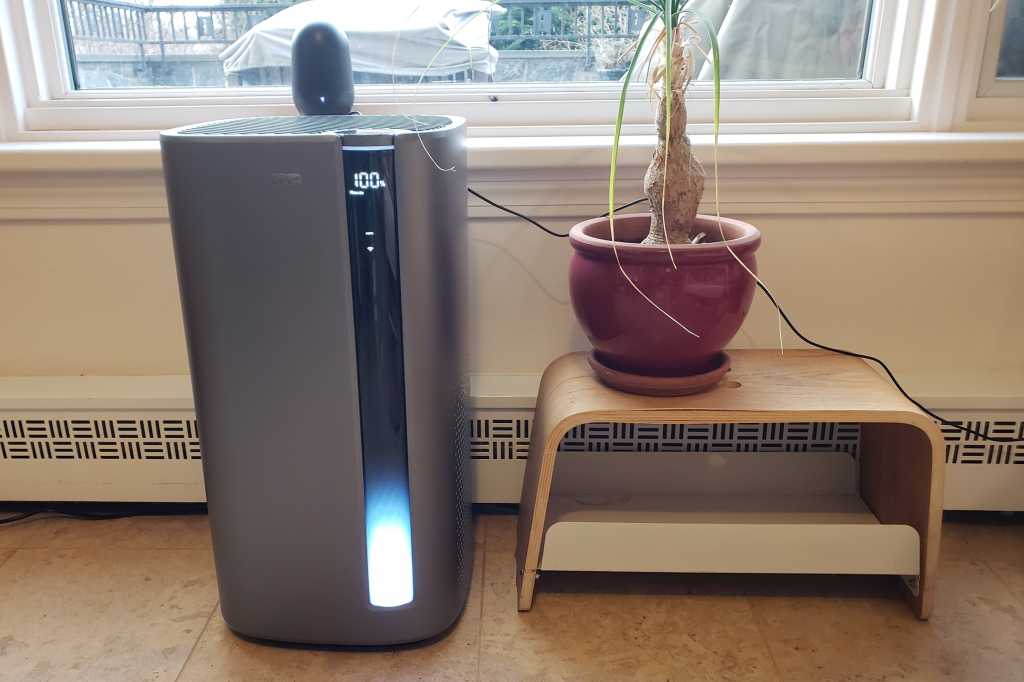 Big, but powerful, the Dreo Macro Max S can quietly clean the air in a room with its three-stage HEPA filter.

With the ability to filter the air in all but the largest rooms, the Dreo Macro Max S is a smart buy for those with indoor air problems. Boasting a three-stage HEPA filtration process along with automatic sensing and air-flow, the Macro Max S is an easy-to-use air purifier that can run 24/7. It might be a bit large, but this floor air filter can sure clear the air.

The Dreo’s styling is so bland that the gray-and-black device should disappear into a corner. On the other hand, its unique vertical status display (more on that in a moment) may make it a conversation starter.

This review is part of TechHive’s in-depth coverage of the best air purifiers.

Aimed at mid- to large-sized rooms, the Dreo Macro Max S draws air through the shotgun holes in the bottom third of the unit and channels the flow through the three-stage H-13 HEPA filter, which reduces up to 99.97 percent of particulates, bacteria and viruses. The final stage in the purification process is an activated charcoal layer that grabs odors and solvent vapors.

In addition to four manual fan speed settings, the Macro Max S has an Auto mode. When Auto mode is enabled, a laser sensor inside the device scans for dust and pollutants larger than 0.3 microns, and the purifier continuously adjusts its air flow to compensate.

One quibble: There are no louvres to direct the clean air flow out of the top.

How powerful is the Dreo Macro Max S Air Purifier?

With a Clean Air Delivery Rate (CADR) of 464 cubic meters per hour, the Dreo Macro Max S Air Purifier blows away the Wyze Air Purifier’s 350 m3/hr, making it appropriate for larger rooms or those that might experience recurring air problems, such as kitchens or furnace rooms. Dreo rates the Macro Max S as capable of cleaning the air in a 273 square-foot room, or of replacing the air every nine minutes in a 300 square-foot room.

While devices like the Wyze Air Purifier have different filters designed for capturing solvents, allergens, or smoke, there’s only one filter available for the Dreo Macro Max S. The general-purpose H-13 HEPA filter is designed to last several months and sells for $50 through the Dreo Web site versus between $35 and $60 for the Wyze replacement filters. It’s easy to set up a replacement schedule with automatic delivery.

You get a five-year warranty if you register the Dreo Macro Max S. That’s a world better than the Wyze Air Purifier’s one-year coverage. Neither warranty, however, includes the all-important air filters, which can overwhelm the initial cost of the purifier in a couple of years.

How are the Dreo Macro Max S’s display and controls?

Rather than a single LCD screen to show the unit’s status, the Macro Max S has two displays, and the second is something of an eye-popper.

On top, the circular control panel shows if the unit is on or off, what the fan setting is, and whether Auto mode is engaged. There are also buttons and lights for resetting the Wi-Fi connection and changing the filter.

More striking is the Macro Max S’s vertical display, a long, thick stripe that extends from bottom to top along the front edge. When it’s blue, everything is good. A green light indicates OK air quality, while orange warns of deteriorating indoor conditions. Red means you should move to a different room or open the windows.

The default setting shows the current air quality, but the vertical display can also be set to show filter status or the particulate level.

Indicators near the top of the vertical stripe cover everything from fan speed and Auto mode to Wi-Fi status and whether the filter needs to be changed. The display can be set to shut off at night, and the unit’s settings can be locked.

How difficult is setup for the Dreo Macro Max S?

After I opened the box and removed the plastic wrap around the HEPA filter, I loaded the Dreo app on my Samsung Galaxy S9 phone; there’s also an app for iPhones and iPads.

I put the filter back in, snapped the lid shut, plugged the unit in, opened the Dreo app, and tapped a button to add a device. Next, I picked the Macro Max S from a list of pictures and entered my Wi-Fi network and password (the unit connects on the 2.4GHz band only).

All told, the setup process took 5 minutes, and I was soon able to remotely turn the Macro Max S on or off, make adjustments, and turn the light off. Happily, the Dreo’s reacted nearly instantaneously to commands from the app, compared to the Wyze Air Purifier’s delayed response.

Does the Macro Max S use the Dreo app?

The Macro Max S comes into its own with the Dreo app. I was able to set up a sleep schedule, adjust the fan, and see the air quality in the room.

The app showed the filter’s remaining life and where to buy new ones.

There’s a timer to schedule on and off periods, and the purifier also responds to Alexa and Google Assistant voice commands.

The Dreo’s graph of local air quality level over time is similar to the one offered by the Wyze Air Purifier, making it easy to spot air quality trends.

With a power consumption of 5.7 watts, the Macro Max S is an electrical miser. If it’s left on 24/7, the unit will cost roughly $7.50 a year in electricity bills, assuming you pay the national average of 15 cents per kilowatt-hour.

The Dreo Macro Max S worked well during three weeks of testing, and most of the time, the unit was so quiet that I forgot it was there. That said, during a cooking marathon in my nearby kitchen, the Macro Max S cranked up its flow to compensate.

Is the Dreo Macro Max S worth the cash?

Both can be left on and can be controlled with a phone app, but the Macro Max S’s unique display makes it easy to see the air quality or remaining filter life at a glance. That makes it a winner for those concerned about the quality of the air they breathe.