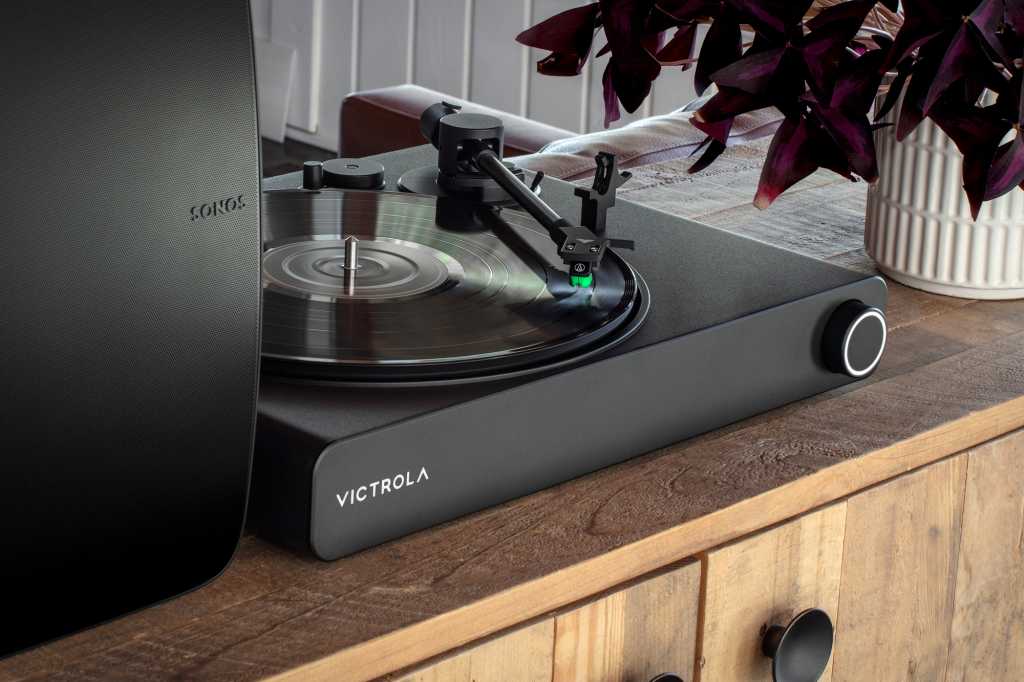 The all-new Victrola Stream Onyx features the same connectivity features as the Stream Carbon, but with lesser-expensive components to reduce its price tag.

If you’re intrigued with the Victrola Stream Carbon turntable’s ability to stream music to your Sonos speaker system, but put off by its $800 price tag, the manufacturer hopes you’ll take a look at its Stream Onyx, which swaps a few of its higher-end sibling’s components—an aluminum tonearm in place of a carbon-fiber one, for instance—in order to bring its price tag down to $600.

And where the Carbon features an Ortofon 2M Red moving magnet cartridge, the Onyx comes equipped with your choice of an Audio-Technica VM95E or an Ortofon OM 5E. These are also moving magnet cartridges, but they cost slightly less. The Onyx is also a belt-drive turntable, and it uses the same removable headshell to simplify upgrading to a higher-end cartridge, and it has the same easy-to-adjust counterweight for setting the correct downforce for whichever cartridge you decide to use.

In our Victrola Stream Carbon review, we praised the turntable for its excellent integration into the Sonos ecosystem and its overall ease of use, but we noted higher motor noise than we’re accustomed to seeing from turntables in its price range. That said, we awarded the product four stars, so we’re looking forward to seeing if the Stream Onyx performs as well in its price range.

The Victrola Stream Onyx is available for pre-order now at Amazon or directly from Victrola.

Updated January 10, 2023 to report the current price of the Victrola Stream Carbon. When we reviewed the Carbon, Victrola was selling it at an introductory price of $700. That offer expired at the end of 2022.