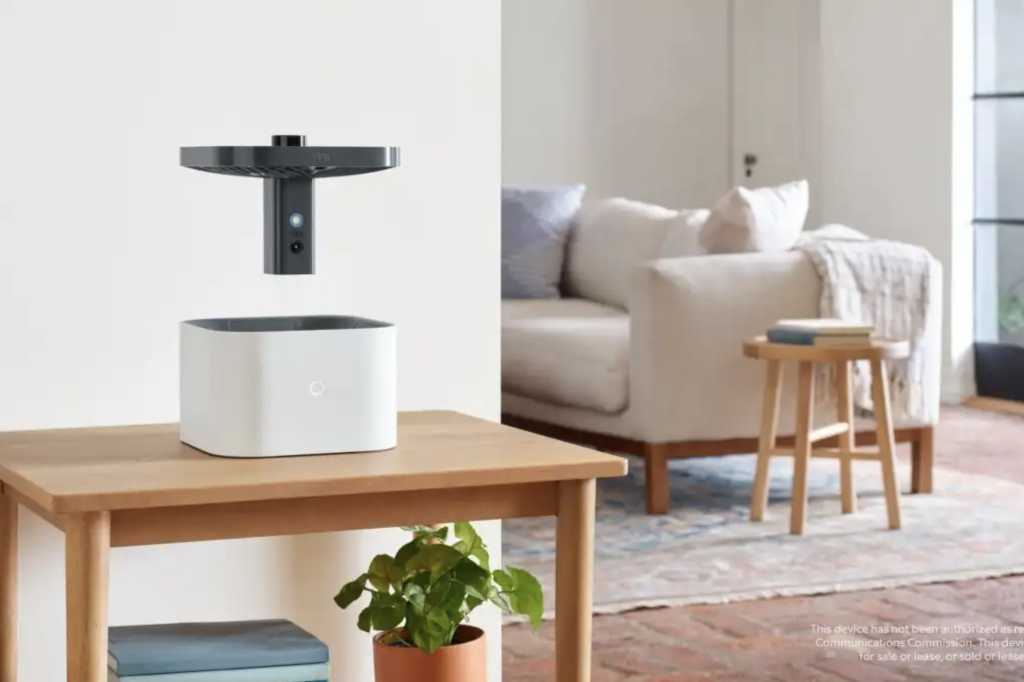 Looks like Ring’s flying Always Home Cam hasn’t been grounded quite yet, with the automated drone making an appearance at CES this week.

Engadget managed to get a demo of the Always Home Cam in Las Vegas, and word is that the airborne home security camera is “a little larger than it looks” in Ring’s promo videos, and that while it may not look like a typical drone, it “certainly sounds like one.”

First unveiled during Amazon’s big fall hardware event in 2020, the Ring Always Home Cam remains one of the wildest products ever announced by the e-tailing giant.

Equipped with a series of internal propellers, the Always Home Cam sits in a squat, square base when it isn’t flying, while a thick lower stem houses the camera lens.

Designed to record only while it’s airborne, the Always Home Cam can’t be controlled manually. Instead, it follows a customizable, preset path around your house, and it can patrol on-demand when triggered by your Ring Alarm.

If the Always Home Cam is as noisy as it sounds, that’s likely on purpose, as Ring says the drone’s hum helps to warn anyone nearby that the camera is on the move. For its part, Ring says the flying cam is “about as loud as a vacuum or a blender,” and that it’s only meant to be used when no one’s at home.

The Cam also has an obstacle avoidance system to help it steer clear of objects and people in its path.

So, here’s the big question about the Always Home Cam: When will it finally arrive?

The last we heard about a release date for the Always Home Cam was in fall 2021, when Ring said that interested users could apply for an invitation to buy the drone. At the time, Ring pegged the price at $250.

The Always Home Cam has yet to emerge from its invite-only “Day 1” status, and eyebrows were raised when the device went unmentioned during Amazon’s 2022 hardware event last fall.

But while Ring wouldn’t reveal a wide release date or final pricing to Engadget (The Verge reports it won’t arrive before 2024), the very fact that the Always Home Cam is buzzing CES attendees at Vegas indicates that the drone is, at the very least, still circling the airport.