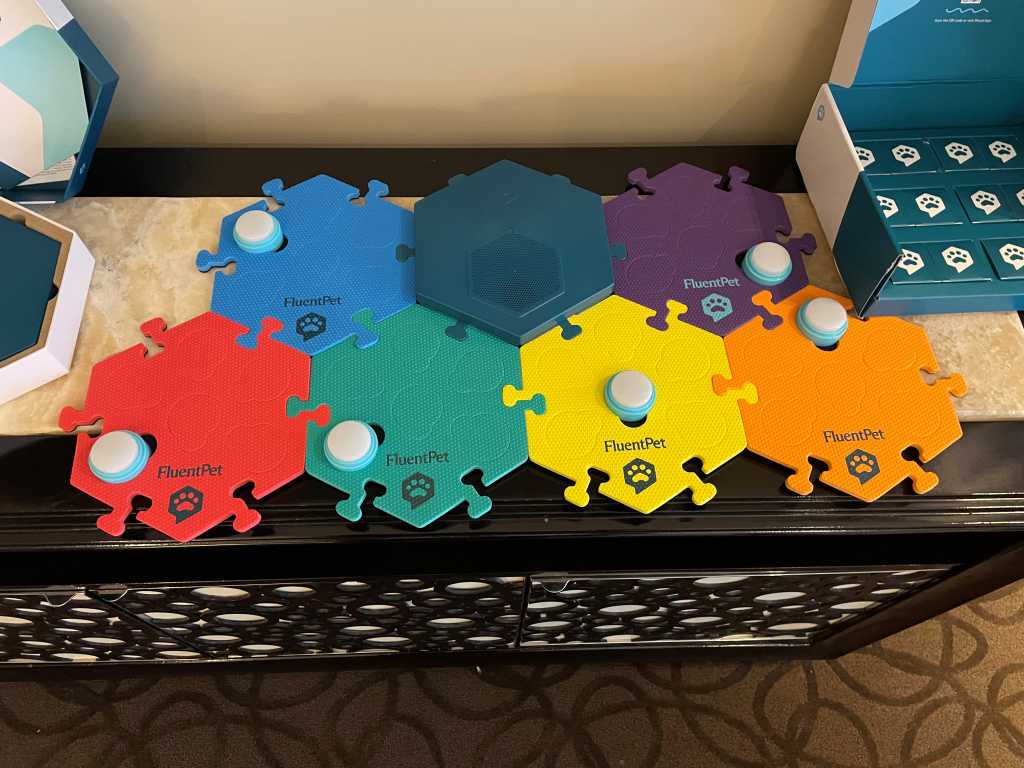 If you’ve ever been frustrated trying to guess what your fur-baby is trying to tell you with its frantic vocalizations, you’ll want to learn about the FluentPet Connect. Once trained to use this innovative system, the inventor promises your dog or cat will be able to communicate its wants and needs by pushing buttons with its paws.

While Lassie probably wouldn’t be able to use this to warn you Timmy has fallen down a well, she could at least tell you when she needs to go outside, wants to play, or sees a stranger on your porch, all without punishing your ear drums with incessant barking.

The system consists of interlocking, color-coded tiles with programmable buttons linked to a Wi-Fi-enabled hub. Humans record their voices naming familiar words—“bone,” “water,” “outside,” and so on—and train their pets to associate those concepts with the button and tile combinations.

During an impressive demo in FluentPet’s hotel suite in Las Vegas, a small dog named Ducky pressed the correct buttons when presented with a tug-toy, a ball, and other simple objects. Each time a button is pressed, a speaker built into the hub says the name of the associated object and logs the interaction to the FluentPet app.

Each hexagonally shaped tile is a different color and has a series of pre-cut holes so that each button can be located in a slightly different position on the tile. Over time, you train your pet to associate each button-and-tile combo with the words they recognize.

FluentPet founder and CEO Leo Trottier says some pets have even learned to press combinations of buttons to express more complex messages. A dog that pressed the buttons for “bone” and “water” in succession, for example, indicated that it wanted an ice cube to chew on.

A FluentPet Connect bundle consisting of the battery-powered Connect Base, three hex tiles, and six buttons can be pre-ordered $160. A larger kit with the base, six tiles, and 12 buttons goes for $230. Additional tiles and buttons will be available to expand either system.