If you’re not familiar with it, DTS Play-Fi is a networking standard designed for whole-home and TV audio that’s been around for more than a decade. You’ll find it on 39 brands of mainstream to high-end home entertainment gear, including Anthem, Definitive Technology, Dish, McIntosh, Onkyo, Philips, Sonus Faber, and—of course—SVS. Play-Fi can handle up to 32 “works with Play-Fi” products from any of those brands in up 16 zones in your home.

Play-Fi was initially designed to be a turnkey streaming system and app for speakers that don’t have a lot of onboard smarts. As such, it’s allowed a big bunch of makers to quickly jump into the streaming audio world, without sinking a lot of their own money into R&D, servers, and tech-support efforts.

In Play-Fi’s early years, that also meant manufacturers didn’t need to integrate pricey onboard processing into those speakers and receivers. Play-Fi operates instead by offloading much of the signal processing and data traffic management to the Play-Fi app, relying in turn on the processor power of the smartphone, tablet, or Windows computer that app is running on. 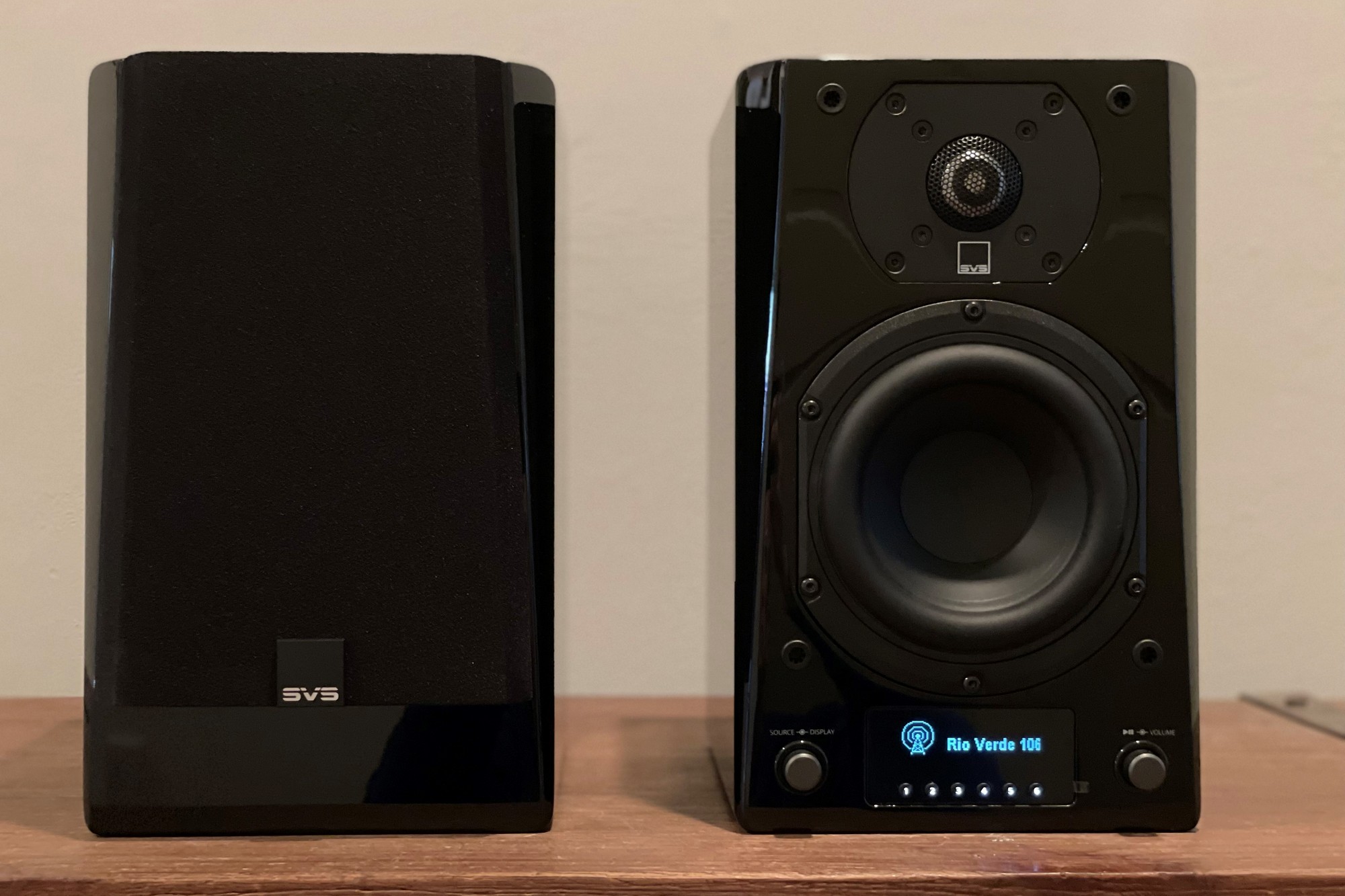 Here’s how it works: When you use the app to request streaming content, the app sends a message via your home network to the cloud. Digital audio then streams from the cloud back to your home network, from there to whatever device the Play-Fi app is running on (your smartphone, tablet, or PC), and from there to one or more of your Play-Fi devices. The entire process—from “play this” to hearing it on your home audio system happens in just two to five seconds with high-speed broadband.

Play-Fi is certainly fixable, but new users might encounter odd conflicts when a phone call comes in on a smartphone that’s preoccupied with streaming music. Or when you’re multi-tasking on the phone, asking it to deliver music and grab a graphics-rich web page. Those things can’t happen at the same time without a wee bit of user intervention. Otherwise, music streaming will automatically pause when the call—or the file—comes in. If you’re lucky, the music will resume when the call ends or the file transfer is completed. With my iPhone 12 Pro, the music comes back about four times out of five.

Curiously, Apple’s AirPlay wireless streaming technology also turns your phone into a music server, but it manages to avoid this music-pausing complication.

Fixing the holes in Play-Fi

Don’t have a heart attack. There are fixes for these stop-and-go, music-interrupting problems. The simplest solution? Don’t use the same smart device to both take calls (or surf the web) and stream music using Play-Fi. Instead, hand off the latter mission to a tablet that’s otherwise sitting idle. You can do the same with a computer, but it will consume considerably more electricity.

If you can’t do that, try taking advantage of a relatively new Play-Fi feature called Transfer Playback. This will direct the incoming digital audio stream from your router directly to your Play-Fi audio device(s), neatly eliminating the middleman and avoiding unwanted interruptions to your listening sessions. There are, however, some major drawbacks to using this solution, which I’ll explain in a moment.

To activate Transfer Playback, tap the icon in the Play-Fi app that has a curved arrow inside a box; you’ll find it in the top right-hand corner of the “now-playing” screen (see the screenshot below). The signal switcheroo takes just a few seconds, after which your music, phone call, and web-surfing operations will operate independently, eliminating the malady of “signal interruptus.”

Now for the drawbacks I mentioned earlier: When Transfer Playback is active, the Play-Fi app becomes limited to starting and stopping the music, skipping tracks, and adjusting the volume. You’ll no longer be able to view a selected album’s track list, and you won’t be able fetch specific songs by name or track number.

What’s more, you can’t stream that music to more than one Play-Fi product at a time while Transfer Playback is engaged. In addition to all that, Transfer Playback remains active for only one music selection. Fortunately, that selection can be an entire album or a complete playlist, you’re not limited to just single tracks. But to keep it going, you must tap that icon each and every time you initiate streaming of a different selection. It’s annoying, but you’ll quickly learn the drill.

You’ll need to engage in a similar tap dance with the Play-Fi app to play ultra-high-res music (up to 24-bit/192kHz) to Play-Fi devices that can handle streams of such high resolution and sampling rate. To unlock this feature, you’ll need to activate Critical Listening Mode by tapping on the Hi-Res toggle you’ll find above the speaker list on the Play-Fi app’s start page (see the screenshot below).

And once again, there’s a trade-off: Critical Listening Mode can send a high-resolution stream to only onespeaker or one stereo pair of speakers at a time. Attempt to connect to more than one—or to send high-res audio to an older Play-Fi speaker that can’t handle it—and the system will down-sample the stream to CD quality: 16-bit/44.1kHz or 16-bit/48kHz. Those are the upper limits that Play-Fi was originally designed to support.

The good news is that once Critical Listening Mode is activated, it will continue to serve ultra-high-resolution streams—you won’t need to re-activate it every time you initiate a stream. But to be honest, the default CD-quality streams deliver plenty of pizzazz for anyone other than the golden-ears crowd listening on higher-end gear.

Lastly, let’s discuss Play-Fi Headphone, which was added to the standard in 2018. Choosing this setting in the Play-Fi app mutes whatever networked audio device had been playing and redirects the stream to the headphone jack on the device the Play-Fi app is running on. On an iPhone, the connection is made through the phone’s Lightning port, and you’ll need a Lightning-to-3.5mm adapter for your headphone.

Play-Fi Headphone is limited to physically connected headphones, it does not work over Bluetooth connections. I also discovered that I couldn’t use Play-Fi Headphone to stream music from online music services or internet radio stations to my wired headphones, it would only play music from sources connected to the SVS Prime Wireless Pro’s analog or digital inputs: HDMI, Toslink, or analog RCA.

Sorry, one last sore point: The Play-Fi folks need to come up with a remedy for the smartphone lockups I’ve experienced a few times while using the Play-Fi app on my iPhone 12 Pro to surf the gazillion internet radio options supported by (but not billed to) the vTuner streaming radio service. My phone has frozen several times when I’ve tapped to connect to a station—Jamaica’s JamRockOne, for example—that appears on a channel menu but is not actually operating. Or when the station has switched to a codec the system doesn’t support.

Instead of announcing to the listener “this channel is no longer available” and letting you move on, the Play-Fi app and phone will freeze and display a spinning wheel. You can sometimes defrost things by closing the app and re-launching it, but there have been other times when I had to power-down and reboot the phone. DTS and vTuner need to collaborate on a solution if they want listeners to keep fishing in new streaming-radio waters.