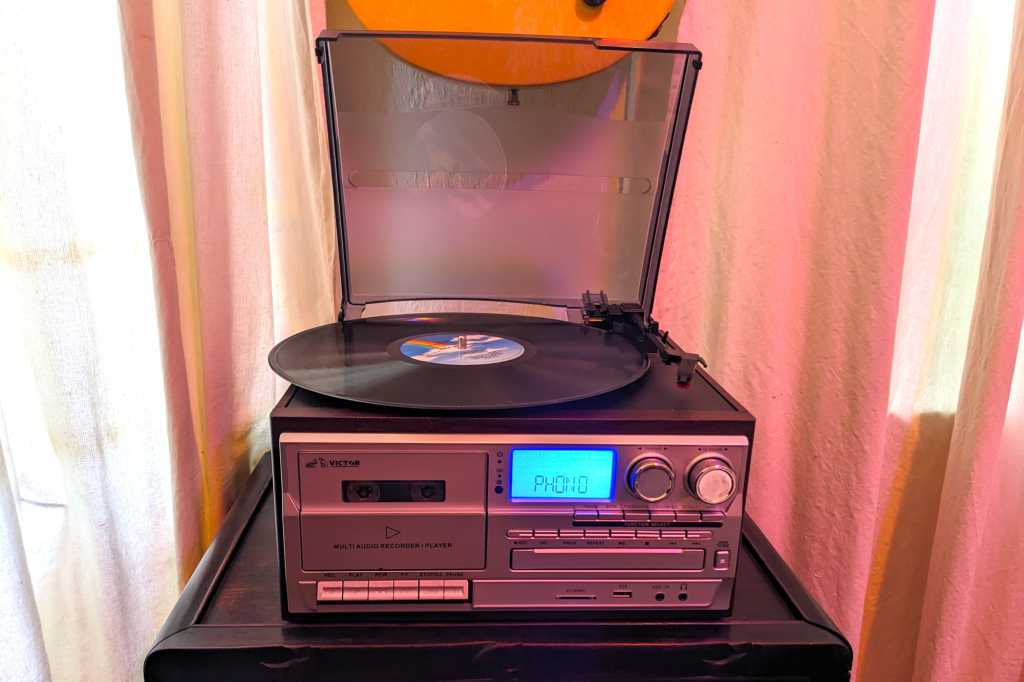 If you have a lot of legacy media floating around—LPs, cassette tapes, CDs, MP3s on USB drives, and the like—you’d be hard-pressed to find a more convenient product to play it or digitize the analog content. The unit also serves as a Bluetooth transceiver for your audio system. But not everything is great here; we encountered a few foibles, and the tape deck is a weak spot.

I almost titled this review “Everything but 8-track,” but that would’ve been starting on a negative note for what I consider to be a very positive product: Victor Audio’s Cosmopolitan 8-in-1 Music Center. It’s the most versatile of the more than a dozen nostalgic, legacy-media playback devices the company has to offer.

Versatile as in not only playing vinyl (at 33-, 45-, and even 78 rpm), cassettes, CDs, and AM/FM radio, but also digitizing any of that material to USB or SD media in MP3 format. It will even record to cassette if that’s of interest. About the only trick missing is burning audio to CD (and the aforementioned 8-track), but that’s a far more complicated process because of all the formatting involved. In truth, I had no desire to burn CDs. Did I mention that it will also transmit and receive Bluetooth audio?

This review is part of TechHive’s in-depth coverage of the best turntables.

Victor sent me the silver-faced, faux dark wood-sided version of the Cosmopolitan, but it’s also available in basic black if you want another, darker appearance that pretty much shouts 1980s. Physically, the Cosmopolitan measures around 12.5-inches wide, by 10.5-inches deep, by just over 8-inches tall with its top-mounted record player cover closed.

The front is home to the cassette desk and CD player, LCD readout, controls, and digital and analog input output. The back contains the power jack (it uses an AC wall adapter, not an internal transformer), the captive FM antenna wire, and analog stereo RCA outputs.

The front panel controls include component selection buttons, as well as large tuning and volume (press for power) knobs. There’s another row of controls above the CD tray that control that device as well as perform other functions: Record (Rec), Delete (Del), Program, Repeat, Play/Pause, Stop, Previous (track, station, etc.), and Next.

These controls are used to record the various components, program and navigate radio stations, handle files on USB and SD media, and so on. The whole deal is quite clever and far more capable than you might assume. Being able to delete files from a USB stick is not something I was expecting.

Victor also includes a remote that covers most of the functionality. It’s about 5.5-inches long, sits nicely in the hand, and sports logically arranged buttons with bold labeling that’s easy to read. The remote is powered by twin AAA batteries, which are sadly not included. Neither is a cable for the RCA jacks. If you’re lacking the latter, order one at purchase time. As I’ll get into, the Cosmopolitan is best feeding other, higher-quality audio gear.

The Victor Cosmopolitan in detail

Being a $180 8-in-1, you shouldn’t expect best-of-breed in any particular component, especially those that are obsolete. I was hoping for workable, and that’s pretty much what it delivered–with one possible exception.

Record player: Handling 78 rpm media in addition to the more modern 33- and 45 rpm platters is a bonus right off the bat. There’s a cushioned tone arm with a cue lever, as well as auto-stop (but not auto-return). A 45 rpm adapter (those records have a larger center hole) is included.

The tone arm rests lightly on the record, the needle seems fine, and speed was steady (it’s belt-driven). The sound coming out of the unit, however, seemed a bit thin compared to my other turntables when digitized. It’s easy to EQ the resulting recordings to something a bit fuller, and the top end is there–something difficult to impossible to recreate if it’s not in the original signal.

This component is certainly workable though I would’ve preferred a fuller sound.

Cassette player/recorder: This is the system’s weakest component. The control buttons are sturdy long-throw mechanical types, it has a beefy door. On the other hand, it doesn’t support Dolby B/C/HX or dbx noise reduction, and there’s no bias adjustment for different tape types.

Also, there seemed to be a bit of high-frequency flutter, likely caused by variations in tape speed, and distortion when recording and playing back tapes. Some of my cassettes are 50 years old and prone to those artifacts, so that might not be the Cosmopolitan’s fault. That said, some were still retail wrapped (i.e., unopened) and of far more recent vintage.

Other oddities include the lack of a light indicating that recording is taking place. Also, the player doesn’t automatically switch states when rewinding or fast-forwarding is done; i.e., the buttons stay depressed. I don’t care about the buttons, but the flutter and distortion were disappointing.

Note that it is possible to fix flutter and wow in post-production using a program from Celemony called Capstan. I’ve used it. It works quite well and requires little user intervention. Capstan is very expensive, but you can actually rent it for a day or two to utilize its magic. So no, that precious blast from the past is not doomed to the phenomena. You might also try a better cassette player.

CD player: This is easily the best of the Cosmopolitan’s legacy media components, and it worked fine in all respects. That comes as no surprise, since it’s one of the newer technologies at hand. Generally speaking, digital either works well–or it doesn’t work at all.

The tray slides in and out promptly, and switching tracks was quick. Note that the CD player will not function at the same time as the tape player, at least when you’re recording the latter to USB.

AM/FM radio: I was pleasantly surprised by the Cosmopolitan’s radio tuner. Even without the wire antenna spooled out from the back, it found a lot of stations. Note that I’m almost exactly in the middle of San Francisco. It will automatically save stations to presets, or you can add them yourself using the multi-function controls above the CD player. The process is explained in the user’s guide.

A tad annoyingly, you can record FM radio but not AM stations. That won’t a big deal for most folks, but there is some unique stuff on AM that I would’ve appreciated being able to document. Sadly, there’s also no Bluetooth output with the radio selected. Regardless, good reception makes this one of the system’s better components.

Digitizing to USB stick or SD card: This is a pretty easy deal, although the Cosmopolitan didn’t like the first 1TB exFAT USB stick I inserted. It was fine with the 4GB FAT32 stick I switched to. Recording is a simple matter of selecting the component you want to record from, pressing record, and then starting playback. The files (REC1.mp3, etc.) are stored by default in a folder named REC, which is created automatically.

Digitizing CDs works a bit differently than recording LPs or radio. You must press Record a second time and the player will start at the beginning of the current track. In other words, you’re ripping digitally, not just recording an input signal. In fact, they’re saved into a separate folder named “Rips.”

I suggest you rename the digitized files right away, or open them on a computer and rename or split them if you’re recording album sides, radio, etc. There are free programs such as Audacity and Ocen Audio that will facilitate this.

Bluetooth transceiver: As the Cosmopolitan both receives and transmits Bluetooth, you can add Bluetooth streaming to your existing TV or stereo system if it doesn’t already have it. Roku TVs, for example, lack onboard Bluetooth output, so you could connect the TV’s aux out to the Cosmopolitan’s aux in and then use its outputs.

Or you can input Bluetooth to the Cosmopolitan and use its headphone jack or RCA analog output to send audio to the rest of your stereo setup. This is definitely one of the Cosmopolitan’s handier features.

How does the Cosmopolitan sound? On its own, not so good. The side-facing internal speakers are lacking in top-end frequency reproductions, and they produce little to no thump. They’ll do in a pinch, but the Cosmopolitan is really meant to deliver audio signals to more sonically capable equipment.

I was generally pleased with the quality of the recordings made from FM radio and especially CDs, with the latter being pristine rips. Digitizations of cassettes weren’t of the same quality, however; that’s likely the tape player’s fault. Recordings from LPs were a bit thin, but I’ve already described that–the frequencies are there, they just need a bit of EQ’ing in post production.

More capable audio gear could include headphones–output from the system’s 3.5mm jack is fine. The sonic characteristics of the RCA outputs and Bluetooth are fine as well. Only the internal speakers sound cheap. Buy this unit for its playback capabilities, but don’t expect it to fill the bill as a standalone audio system.

Is the Victor Cosmopolitan 8-in-1 a good value?

No component in the Cosmopolitan will please an audiophile, but that’s not Victor’s intended market. This system is aimed at the average person with a bunch of legacy media they wish to play or digitize. The Bluetooth takes it a bit beyond that, making it a great unit to send signals to and from your attached equipment. That said, if cassettes are your primary focus, you might be disappointed.

In the end, I appreciate the Victor Cosmopolitan 8-in-1 Music System both for its vintage looks and its multitude of capabilities. It’s great not to have to fire up a computer to rip a CD (assuming you can find a computer with a CD drive), and recording FM is very cool. I will say one last time, though: The cassette deck’s audio quality is disappointing; apart from that: Good job, Victor.