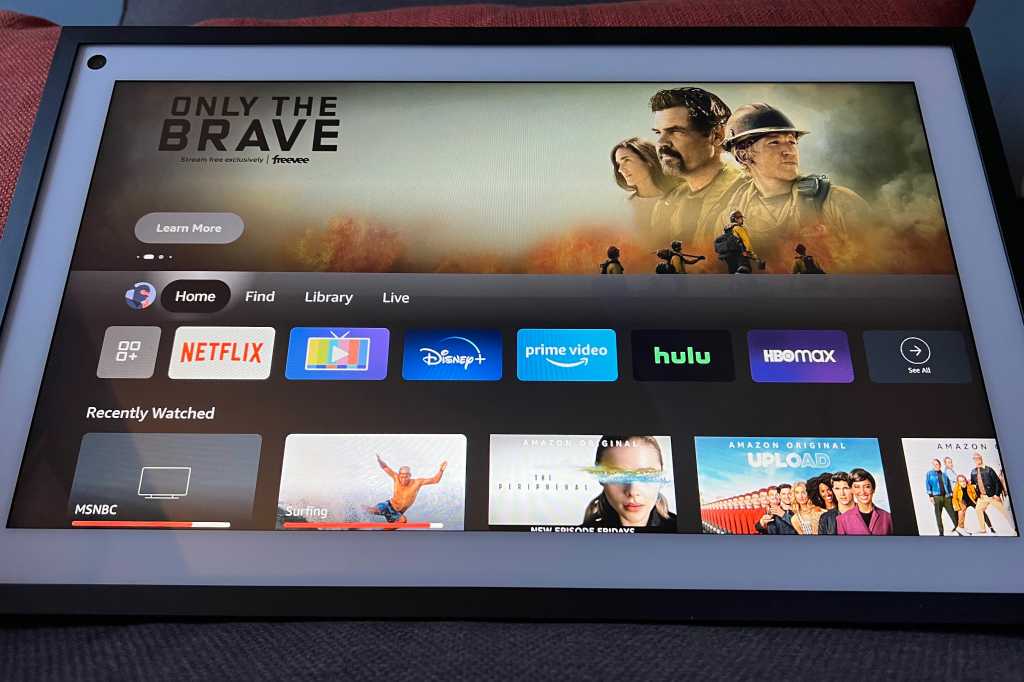 After announcing Fire TV mode for the Echo Show 15 earlier this year, Amazon is now making it available to users.

Once enabled (you should see a notification on your device), the feature turns Amazon’s largest smart display into a miniature TV, which you can control using the touchscreen, Alexa voice commands, or a Fire TV remote ($30, sold separately). Compared to using Alexa alone, it’s a more reliable way to play video on the 15-inch screen.

But before you buy an Echo Show 15 for this purpose, be aware that it’s not quite on par with the full Fire TV experience. The Apple TV app (for Apple TV+ subscribers) doesn’t work, app sideloading isn’t supported, and the interface has a handful of bugs and quirks.

Strictly for TV-viewing purposes, you might be better off buying a small television, as the $250 Echo Show 15 is pricy for a TV alone, and it lacks a built-in stand. (Sanus offers a $33 tilt stand for the Echo Show 15, as well as an Echo Show 15 tilt/swivel stand for $44.) But if you’re already interested in the Echo Show 15 for its smart display features, Fire TV mode is a useful new perk.

How to use Fire TV mode on the Echo Show 15

Once Fire TV mode is available on your Echo Show 15, you can switch to it by tapping the Fire TV icon in the top-right corner of the screen, or by swiping down and selecting “Fire TV” from the quick settings bar.

During the initial setup, you can choose which apps to install and pair a third-generation Alexa remote, which costs $30 on its own. You can also control the Fire TV interface through the touch screen, but most apps require you to use a virtual on-screen remote instead of swiping and tapping. The option to pair a separate remote comes up any time you use an app that isn’t fully optimized for touch.

Once you’ve paired a remote, Fire TV mode loads instantly whenever you tap the home button, and tapping the home button a second time returns to the standard Echo Show 15 interface.

Fire TV mode: What you can and can’t do

On the performance front, the Echo Show 15 doesn’t have any issues handling the Fire TV interface. Scrolling around feels snappy and fluid, and storage isn’t much of a concern either, as the Echo Show 15 still has more than 8GB of free space even with Fire TV mode installed.

Most of the apps I tested worked just fine on the Echo Show 15–including Netflix, HBO Max, Pluto TV, and Channels DVR–with one caveat: Streaming TV apps require that the Echo Show 15 be in landscape orientation–they won’t launch if the display is in portrait mode. Games, such as Crossy Road, were also playable using the Fire TV’s remote. The only exception I could find was the aforementioned Apple TV, which appears in Amazon’s Appstore but with an “Unavailable” message. Amazon won’t say if the app will ever be available on the Echo Show 15.

Contrary to previous reports, both the YouTube and YouTube TV apps worked as well, with the same Alexa support found on proper Fire TV devices. That means you can search for YouTube videos with Alexa and jump directly into live channels by voice in YouTube TV.

Speaking of voice control, asking Alexa to launch a specific TV show or movie now takes you to that content inside the Fire TV interface. Ask to watch Wednesday on Netflix, for instance, and you can use the remote to switch between episodes or go back to Netflix’s main menu. The Fire TV remote also supports general Alexa commands, so you can ask about the weather, set timers, play music, or control smart home devices. You can also show live feeds from compatible home security cameras in picture-in-picture mode while you’re watching video programs.

One notable limitation, though: The Echo Show 15 doesn’t support sideloading apps in Fire TV mode. While you can technically use an app like Downloader to download APK files, no menu option exists for installing apps from unknown sources.

While the Fire TV experience works well overall on the Echo Show 15, I did notice a handful of oddities.

Some Fire TV apps, for instance, bring up a touchscreen keyboard for text entry, with no option to type using the remote. It’s a minor nuisance if you’re across the room and want to search with the keyboard or log into an app.

The Echo Show’s Fire TV interface is also slightly different from the standard version. It appears to use an old version of the top navigation menu, with no “My Stuff” section and full text instead of icons for each tab. And while you can still pin six favorite apps to the top of the home screen, those appear beneath the main navigation tabs instead of next to them.

Connecting Bluetooth earbuds was an issue as well, with noticeable audio lag compared to the video on screen. That wasn’t a problem using the same earbuds with a Fire TV Cube.

Lastly, there’s no way to control the regular Echo Show 15 interface with the Fire TV remote. This becomes a problem for Alexa commands that require input, such as music playback or a list of your upcoming calendar appointments, as you can only interact via the touch screen. On a regular Fire TV device, asking for music brings up a player that you can control with the remote instead.

Is the Echo Show 15’s Fire TV mode worth it?

At a list price of $250, the Echo Show 15 is expensive for a small TV. Insignia’s 24-inch Fire TV Edition television, for instance, lists for $170 and frequently sells for less; plus, it comes with a remote and a stand. If you have the space for a slightly bigger screen, a proper television will likely make more sense than the Echo Show 15.

But for folks who’ve already set up an Echo Show 15 for its photo frame features, informational widgets, and smart home dashboard controls, adding the full Fire TV interface makes sense. Amazon likely observed that users want to watch video on this device, and being able to invoke Fire TV mode beats futzing around with Alexa voice commands. It also gives the Echo Show 15 access to more streaming video sources than it would have otherwise.