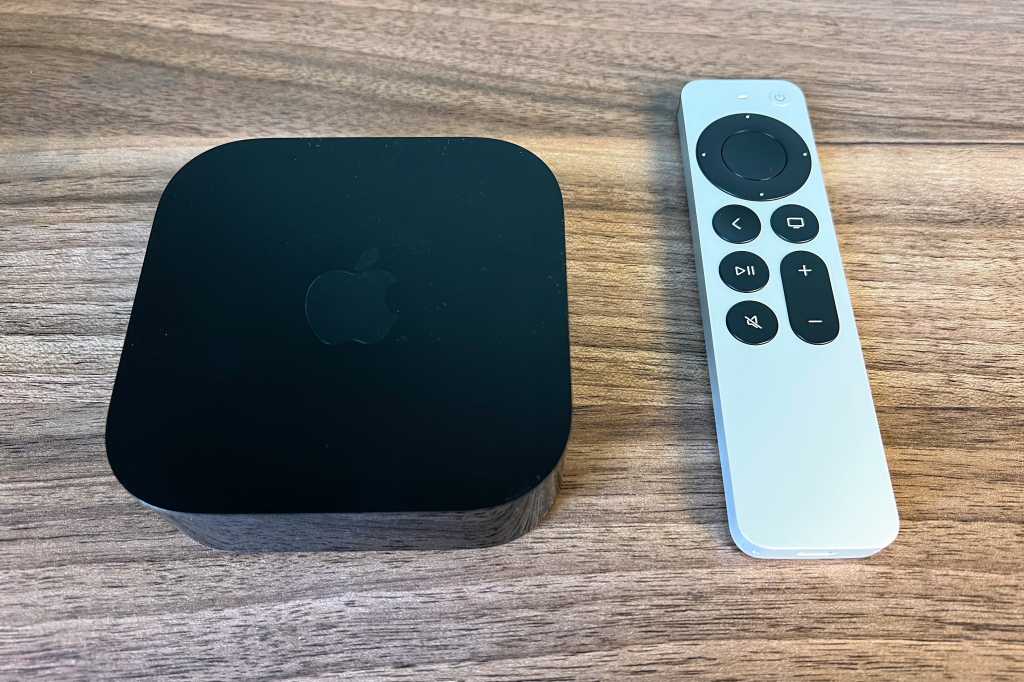 Apple’s new streaming box gets a lower price without losing what made previous versions great.

Apple has always made excellent streaming boxes, but with a caveat: They’re a lot more expensive than the competition.

That’s not the case with the 2022 Apple TV 4K, which at $129 is no longer out of whack with other high-end streamers. Despite being $50 cheaper than last year’s model, the new Apple TV doesn’t sacrifice what made previous versions great: It still offers speedy performance, an ad-free home screen, and a helpful menu for sorting through your streaming options.

Owners of last year’s Apple TV 4K can skip this version, which doesn’t offer enough new features to be worth an upgrade. But for folks in need of a new streaming box, the third-generation Apple TV 4K solidifies its place at the top of the heap.

This review is part of TechHive’s in-depth coverage of the best media-streaming devices.

The 2022 Apple TV 4K is still a hunk of black plastic that plugs into your TV with an HDMI cable (sold separately), only now it’s a little bit shorter and lighter than the previous model as it no longer has a cooling fan inside.

Apple has also upgraded the processor to an A15 Bionic, though the difference is barely noticeable even compared to the 2017 Apple TV 4K in side-by-side testing. Most apps took the exact same amount of time to load (at worst, the older model’s load times were a second or two behind), and jumping through the Apple TV’s recent apps list felt the same on both devices. The new chip merely firms up the Apple TV 4K’s lead as the zippiest streaming box you can buy.

The 2022 model’s other main improvement is HDR10+, which can adjust color levels on a frame-by-frame basis on compatible TVs with HDR10+ content, Amazon Prime Video being the main purveyor right now. Dolby Vision, which is more widely adopted (Samsung TVs being a notable exception), continues to be available as well, along with Dolby Atmos object-based surround sound. The new Apple TV will also support a feature called QMS VRR, which can match the frame rate for content without showing a black screen, but this is entirely about future-proofing, as no TVs currently offer the feature.

For this review, I evaluated the entry-level $129 Apple TV 4K, which includes 64GB of storage—double that of the previous model—but lacks an ethernet port. For that, you’ll need the $149 model, which can also control smart home devices that use the Thread networking protocol.

Thread support is yet another case of future-proofing, as few smart home devices currently support it. It’s also not essential given that other devices can act as Thread routers as well, and that you can still control HomeKit devices and execute Siri routines with any Apple TV model. For most users, the entry-level Apple TV should be just fine.

The new Apple TV’s Siri remote is nearly identical to the 2021 version, with an aluminum enclosure and a proper directional pad, but with one important difference: It uses USB-C for charging instead of a Lightning connector.

While the remote feels as classy as ever, it still favors form over function in some ways. The home, back, play, and mute buttons are all the same size and shape, with only a slight concavity on the back button to help distinguish it, and the side placement of the Siri voice control button makes it easy to neglect. Apple also whiffed on another opportunity to build in a “Find My” function as seen on the Roku Ultra. That’s a shame given how easily the remote slips between couch cushions.

The directional pad’s gesture controls, meanwhile, can be tricky to master, even if swiping across the D-pad is the fastest way to scroll through menus or fast forward through videos. For some less tech-savvy visitors, I’ve had to disable the gestures entirely.

That said, the Apple TV’s A/V controls are excellent. The device recognizes most televisions automatically, so you can control volume and power without any additional setup, and it can change the volume on external soundbars or receivers over either HDMI-CEC or infrared. If Apple’s automatic setup fails, you can even program the remote’s volume buttons manually.

The Apple TV is also the only streaming player that supports voice for any input field, including user names and passwords. Being able to dictate each number and letter of your password is much faster than thumbing through the on-screen keyboard, and is sneakily one of the Apple TV’s most delightful features.

On the software side, the Apple TV is unique in that it essentially offers two home screens.

By default, clicking the home button takes you to Apple’s “TV” app, where you can quickly resume shows you’ve been watching, get suggestions on what to watch next, and look up a list of live sporting events. When you watch a show in a supported app, it automatically appears in Apple’s “Up Next” menu, and selecting a program from here takes you to the corresponding app to begin playback. While the TV app is a little too aggressive about promoting Apple TV+ content, it’s still a useful way to stay on top of what you’re watching from lots of different streaming sources.

Pressing the home button a second time takes you to a more traditional app grid, one that’s refreshingly free of banner ads or other annoying intrusions. From here you can sort apps into folders, and some apps will give suggestions on what to watch when you put them in the top row. By heading to Settings > Remotes & Devices, you can set the Apple TV to bypass the TV app and take you straight to the app grid instead.

While I appreciate that Apple gives users this choice, it really ought to bring some sort of app row into the TV app as well. Some apps, such as Netflix and YouTube, don’t display any content inside the TV app, so it’d be nice if you could launch them without loading an entirely separate menu.

As with previous Apple TVs, you can also navigate by voice with the Siri button on the remote. Siri supports sophisticated searches such as “action movies with Harrison Ford” or “new comedies on Netflix,” and it can launch movies or shows directly in a wide range of supported apps. The only notable downside for voice control is that it can’t tune to live channels from YouTube TV or Hulu + Live TV, the two most popular live TV streaming services.

While you needn’t be an Apple diehard to appreciate the Apple TV 4K, being plugged into the company’s ecosystem does have its perks.

The most notable is AirPlay support, which lets you stream music and videos to the TV from an iOS device or Mac. While AirPlay is available on Roku players and some recent smart TVs as well, only the Apple TV supports viewing AirPlay videos in picture-in-picture mode. It also lets you stream audio from the box to other AirPlay speakers, which can be useful for playing TV audio on multiple speakers throughout the house.

The Apple TV also plays nicely with iCloud Photos, so you can view personal photos in screen-saver mode; plus, it has native apps for Apple Podcasts, Apple Music, and Apple Fitness. Apple Arcade subscribers can even connect a game controller to play on the big screen.

And while the Apple TV can play audio through any set of Bluetooth headphones or earbuds, the pairing process is easier with AirPods: Just open the AirPods case, long-press the home button, open the audio device menu, and select the earbuds from the list. With two sets of AirPods or Beats earbuds, the Apple TV can let two people listen privately at the same time. (Roku is the only other platform that supports private listening for more than one user, via the Roku mobile app.)

Also worth noting: The same App Tracking Transparency features from iOS are also available on Apple TV, which means apps must get your permission before they can share tracking data with third parties. While this doesn’t prevent the apps themselves from collecting information about you for ad-targeting purposes, it does give some control back to users in ways that other platforms do not.

Apple TV 4K vs. the competition

Even if you ignore those Apple-centric benefits, the Apple TV 4K is the best high-end streaming box for the money.

Its interface is less cluttered than other platforms such as Roku, Fire TV, and Google TV, with no ads to lard up the home screen. Its performance is also unparalleled, and its voice search features are surprisingly helpful given Siri’s not-so-stellar reputation. Meanwhile, the new $129 starting price undercuts the $140 Fire TV Cube and isn’t too far off from the $100 Roku Ultra.

While the remote control still has more of a learning curve than those devices, and Apple’s TV app could use some refinement, those are minor complaints given everything else the device has to offer. The result is a streaming player that feels less like a splurge and more like a sound purchase decision.