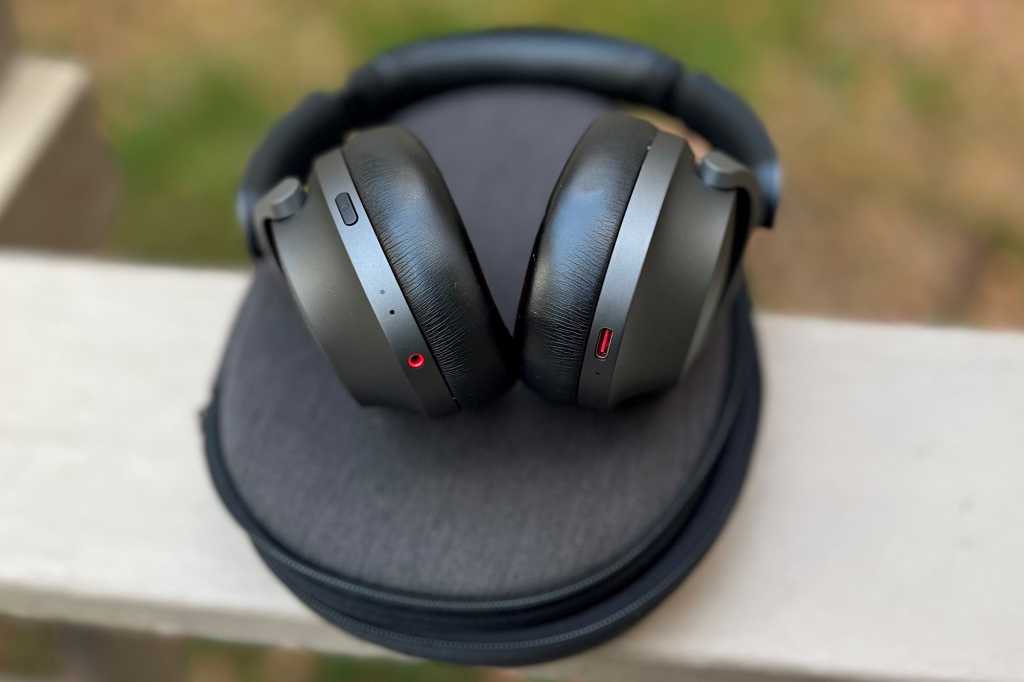 If you’re an Android user with a phone that supports the LDAC codec, 1More has delivered a headphone that punches far above its weight. It’s quite good with an iPhone, too.

1More has a reputation for designing headphones and earbuds that have the look and performance of high-quality audio gear at a value price. The new 1More Sonoflow wireless active noise-cancelling headphone continues that tradition, with a nice build quality and excellent sound at price point less than $100.

How well is the Sonoflow headphone built?

The 1More Sonoflow headphone is all plastic and pleather, but it has a polished look and build quality that echoes far more expensive headphones from Bose or Sony. You’d need to have the Sonoflow and the Sony WH-1000MX5 side-by-side to really tell the difference between the $100 1More and the $400 Sony.

All the controls for the 1More Sonoflow on are the right-hand earcup, with the power button on the front and the noise-cancellation and volume-control buttons are on the back. While it’s not labeled for listeners who don’t read the manual, that power button also controls play and pause.

The headphone is all black, except for a red cloth lining inside each earcup. They’re helpfully labeled with L and R for matching with your left and right ears. Those labels are also important when it comes to using the very nice gray zip-up protective case that comes with the Sonoflow.

The inside of the case has depressions to hold each earcup, with L and R embossed in the proper slots. If you line up the L and R from the earcups, the headphone fits snugly in a case that will protect them during transit. There’s also a net pocket for the included USB-C to USB-A charging cable and the 3.5mm audio cable that allows you to use the Sonoflow as a wired headphone.

The excellent new Soundcore Space Q45, which costs $50 more, makes for a good comparison. The Sonoflow’s build quality is just as nice, and its case is far superior to the Q45, which inexplicably comes with a cheap plastic insert for positioning the headphone in the case.

What are the audio capabilities of the 1More Sonoflow headphone?

The Sonoflow features 40mm dynamic drivers with a frequency range of 20Hz to 20kHz. It uses Bluetooth 5.0 and supports the AAC, LDAC, and SBC codecs. If you’re using a source that supports LDAC, the top of the headhone’s frequency range expands to 40kHz.

What’s missing is aptX, the most common higher-quality streaming codec, which is supported by Android devices but not Apple’s iOS. LDAC is a Sony-developed codec that’s challenging Qualcomm’s aptX domination. It offers higher-resolution streaming than standard aptX.

Older Android phones might not support LDAC, but if you’ve bought a high-quality Android device in the last three years or so, odds are good that it supports both aptX and LDAC.

Is there an app for the 1More Sonoflow?

1More has an app for both iOS and Android. Once you’ve paired the Sonoflow headphone to your phone and connected it to your app, you get an app screen that shows the current battery level, and controls that let you choose between ANC, pass-through, and off. There’s a switch to turn on the high-definition codec if you’re streaming high-def audio.

There’s also a Sound Options panel that give you access to a dozen EQ presets, including default, bass booster, classical, deep, hip-hop, pop, bass reducers, acoustic, podcast, electronic, lounge, and vocal booster. A second Custom EQ control allows you to make your own personalized equalization and save it for future use.

Listening to the 1More Sonoflow headphone

For testing, I streamed the excellent new 2022 stereo mix of The Beatles’ Revolver while the Sonoflow headphone was connected to both an iPhone 13 Pro Max running 16.1 and a 1Plus 10T running Android 12.

For comparison, I connected the Soundcore Space Q45 headphone to both the iPhone and the Android. There was a marked difference in the results.

The new Revolver mix by Giles Martin and Sam Okell is markedly different than the stereo version that aging listeners grew up with. Stereo mixes were still an afterthought for most pop and rock artists in 1966, and Revolver is The Beatles LP that has always been the one with the greatest quality drop-off between the stellar, artist and producer-approved mono version and a stereo version that was likely squeezed in at the end of a long day and left to some assistants.

If you can listen with open ears, the new version embraces the sensibilities that would inform stereo mixes of rock music within the next couple of years. Revolver sounds more connected to The White Album and Abbey Road now than ever before. The mono version remains the best version of the album, of course, but we’re testing a stereo headphone here.

When the 1More Sonoflow is connected to the iPhone and playing back from Apple Music or Qobuz, the playback is limited to using iOS’ excellent but limited-to-CD-quality AAC codec. The Sonoflow headphone captures the spirit of the new mixes. The new placements of instruments in the sound field comes through with no problem.

When compared to the Space Q45, however, the Sonoflow can’t quite match the details the more expensive headphones deliver when using the iPhone. If you’re an iPhone user and looking for a headphone, the Soundcore are probably worth the extra $50.

The results are quite different when using the LDAC codec on the Android phone. Bluetooth can’t yet deliver a true high-resolution audio stream; you’ll need wires and an external DAC for that experience. LDAC, however, does deliver more data than AAC or SBC, and the results were startling.

To get LDAC on an Android, you’ll need to dig into the settings app and turn on the Developer Menu to get access to the controls that activate the higher-resolution streams. An online search should give you the details for how to do that on your phone, since every manufacturer’s version of Android seems to be just a little bit different.

Once that’s accomplished, activate the High-definition Codec switch in the 1More app and prepare to be surprised. This headphone sounds great with a high-res stream, with far more impressive results than what I heard with the iPhone. There’s more detail in the instruments, especially in the decay of each note. It’s truly impressive that streaming music can sound this good.

The 1More Sonoflow headphone’s performance comes a lot closer to matching the Soundcore Q45 when using LDAC on the Android phone. The Q45 is noticeably better, but not by much.

All of the above discussion is about listening with all noise cancellation turned off. When ANC is on, there’s a pronounced bass-forward effect for both headphones when playing back either on the iPhone or the Android phone. Listeners might want to adjust the EQ after comparing the two settings.

Should you buy the 1More Sonoflow headphone?

If you subscribe to a high-res music streaming service and own an Android phone that’s compatible with the LDAC codec, the 1More Sonoflow is a bargain that delivers an experience far better than you’d reasonably expect for the price. If you’re an iPhone user, they sound excellent for a $100 headphone. They might not have quite the same magic as they do for an Android user who subscribes to a high-res music streaming service, but they’re still very good headphones.