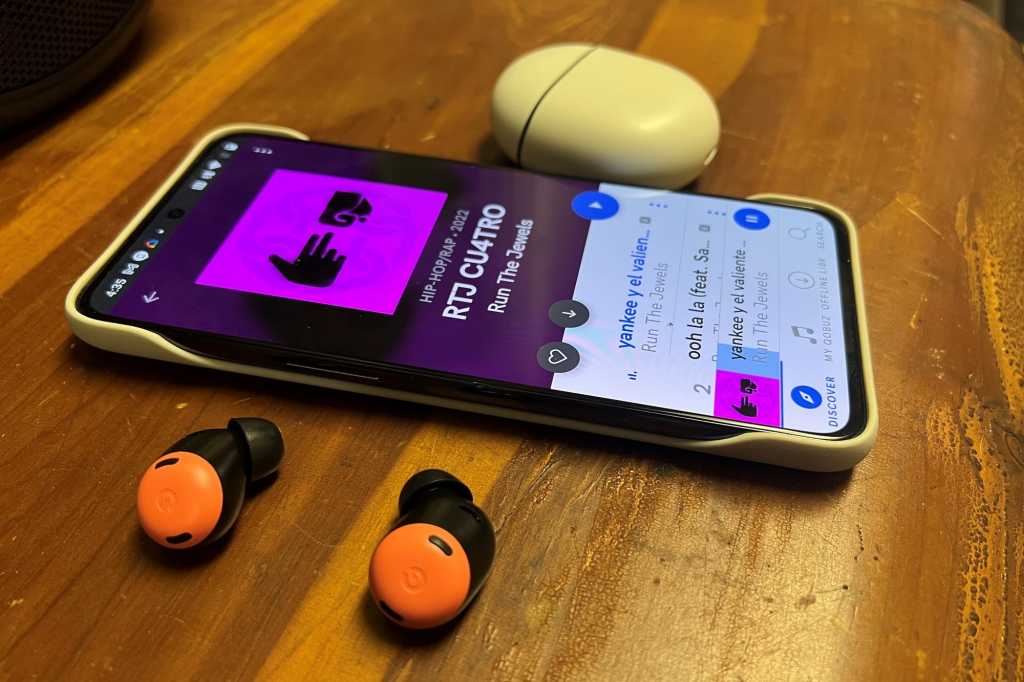 The Google Pixel Buds in-ear active noise-cancelling headphones will work with any Bluetooth-compatible device, but they’re specifically designed to provide a superior experience with Android smartphones and tablets.

Google has pushed its Pixel phone as the worthiest Android competitor to iPhone, and the Pixel Buds Pro are designed to be Pixel’s version of AirPods, with an integrated experience that delivers maximum ease-of-use paired with quality sound.

The Pixel Buds Pro are excellent all around, with a unique and modern design paired with flawless integration with the Android operating system. What they don’t offer are the higher-resolution codecs you’ll find in the competition: There’s no aptX or LDAC compatibility here. Google has decided that the Pixel Buds will stand or fall with the AAC and SBC codecs.

Google has concentrated on creating a superior user experience for Android users, realizing that most customers will be happily pay the premium for these earbuds because of that experience and won’t care much about the specifics of audio codecs.

How to do the Pixel Buds Pro look and feel?

The Pixel Buds Pro excel on the design front. The charging case is pebble-shaped and the color lands somewhere between beige and off-white. It feels better in the hand than any other case I’ve used, and the rounded corners make it easy to slip in and out of a pocket.

The buds themselves taper down to the stem that holds the ear tips. There’s a large, flat surface that sits outside the ear that’s used for touch controls. The buds themselves are black, but buyers have a choice of coral (more of an orange), fog (blue gray), charcoal (light gray), and lemongrass (yellow/green). The charcoal version is there for anyone who doesn’t want to flaunt their style, but the other three colors offer a playful alternative to the dull and monochromatic earbuds that dominate the market.

Aside from the case and the two earbuds, Google includes a clever cardboard tube to house two other sizes of ear tips (small and large) to go along with the medium ear tips preinstalled on the earbuds.

There’s a quick-start guide but no charging cable, even though there’s a USB-C port on the bottom of the case for wired charging. The case is Qi-compatible, so maybe Google felt it could get away with saving a few cents by not including an accessory that every other earbud manufacturer seems to include.

Google claims 7 hours of battery life with ANC turned on and 11 hours in transparency mode. Combined with a fully charged case, you should get up to 31 total hours of playback before running out of juice.

Each earbud features a custom-designed 11mm dynamic speaker driver and three microphones. They weigh just 0.22 oz. each and have an IPX4 water resistance rating, so there’s no need to worry about sweat during a workout even though they’re not going to survive an extended dip in the pool. (This article tells you everything you need to know IP codes.)

The Pixel Buds Pro use Bluetooth 5.0 and support the AAC and SBC codecs. If the lack of aptX or LDAC is not a dealbreaker for you, these earbuds perform well with both iOS and Android.

Google did an excellent job of integrating the Pixels Buds Pro with the Pixel Buds Android app. That starts with pairing, which happens via a pop-up screen on the Android device the first time you open the case. The Pixel Buds Pro support multipoint connection, so you can pair them with two different devices.

Out of the box, a single tap on either earbud plays and pauses the music, a double tap switches to the next song, and a triple tap takes you back to the previous track. You can answer a call with a single tap and reject it with a double tap.

The Pixel Buds app allows you to further configure the touch controls. For the Pixel Buds Pro, a touch and hold gesture can trigger the Google Assistant or the ANC, cycling between noise cancellation and transparency. You can also assign each function to the ear of your choice, so that both are available.

The fact that you can also activate the Google Assistant with a “Hey Google” voice command allows you to assign ANC control to both left and right earbuds, if you prefer. Assign Google Assistant to both earbuds, though, and you’ll need to open the app to control noise cancellation.

If you want to customize your equalization, there are EQ presets that include Google’s default setting, plus heavy bass, light bass, balanced, vocal boost, clarity, and last saved. There are basic sliders if you want to customize the sound to your liking, and you can access your most recent customization with that last-saved button.

You can also use a volume balance slider to reduce the relative volume for the left or right earbud in relation to the other. If you’ve paired the Pixel Buds Pro with multiple devices, an audio switch function allows you to seamlessly hand off the connection from one device to another.

Just like the AirPods Pro, there’s an eartip seal check that plays 20 seconds of audio to check the fit of your eartips. If you don’t pass the test, the app suggests that you reseat the earbuds or put on larger tips and try again. I tried half a dozen times with no luck and even temporarily switched to a large pair of eartips, from medium, in an attempt to get a thumbs up.

The seal sounded fine to me, and I eventually got a “Your earbuds sound great!” message when I ran the test one last time as I was wrapping up the review. I didn’t do anything to change the fit, so I’m not sure why I finally had success. Anyway, if the fits seems right to you and the ANC is working, there’s no reason to worry that you’re missing out.

There’s no Pixel Buds App for iOS, so iPhone users will get none of these app-enabled features. The touch controls work, but you’re limited to the default EQ and can’t access the Google Assistant via voice or touch controls.

Listening to the Pixel Buds Pro

I first paired the Google Pixel Buds Pro and used the earbuds with an iPhone 13 Pro Max as I listened to Apple Music, Audible, and took some phone calls. Listening to Run the Jewels’ 2022 remix album RTJ CU4TRO, the low end of the AAC stream is pumped up to the point where there’s some blur between the deepest lows and the mid-bass frequencies. The rest of the spectrum had excellent separation between instruments and a reasonably wide soundstage.

Calls sounded great on both ends, as did audiobooks. If you’re an iPhone user, the Pixel Buds Pro compare favorably to the first-generation AirPods Pro. Of course, using these with an iPhone sacrifices all the features that make the Pixel Buds Pro so compelling. Go for the AirPods unless you’re in dire need of some orange or green earbuds.

Switching to an SBC stream of the same album in Qobuz on a OnePlus 10T Android phone, there was slightly more detail and better separation on the low end. I checked a few other tunes and that difference was consistent between devices.

Should you buy the Pixel Buds Pro?

Are the Pixel Buds Pro the best-sounding earbuds in their price range? Not really. I prefer the Beyerdynamic Free Byrd earbuds, even though they cost a bit more. From a pure audio perspective, the Soundcore Liberty 3 Pro might be a better choice and they’re available at heavily discounted prices these days. (Read PCWorld’s excellent Soundcore Liberty 3 Pro review.)

Still, Google is selling an overall experience here and is not focusing solely on sound. The Pixel Buds Pro offer an elegant and seamless experience for Android users and they look amazing. The app offers some options, but nothing is too complex.

If overall experience is important to you, and you look like the looks of the Pixel Buds Pro, their performance with an Android phone is probably the closest thing you’re going to get to the tight integration between the iPhone and the AirPods. Very good sound and that seamless experience will make the Google Pixel Buds worth the money for an overwhelming majority of Android users.