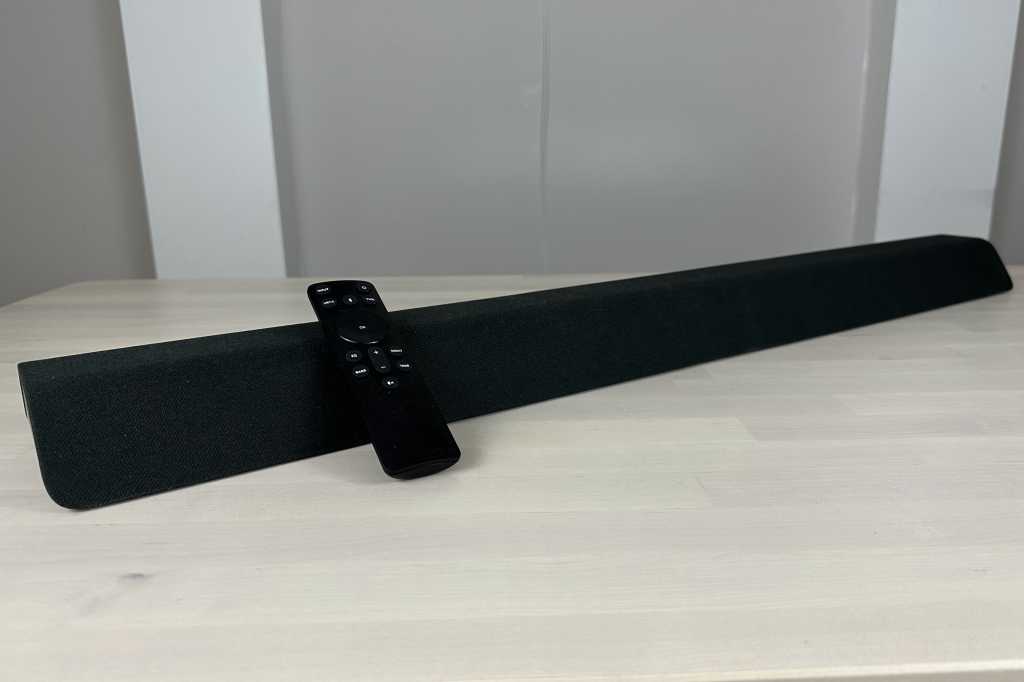 The Vizio M213AD-K8 lacks Wi-Fi and doesn’t include an integrated streaming video player, but it delivers the best Dolby Atmos performance we’ve heard in this price range.

It wasn’t all that long ago that Dolby Atmos was found only on the priciest soundbars, but now even budget models are getting hip to Atmos. Take the Vizio M-Series All-in-One M213AD-K8, which costs a mere $200 but delivers the goods, including Dolby Atmos and DTS:X. This swell-sounding soundbar won’t rock a large living room, but it’s powerful enough to fill a bedroom or a second room with full, balanced, and surprisingly deep sound.

Of course, something had to go for Vizio to hit that budget price point, and in the M213AD-K8’s case it was Wi-Fi. So while the soundbar does support Bluetooth, there’s no AirPlay 2 or Chromecast, nor is there a built-in streaming player.

You’ll find all those features on Roku’s Streambar and Streambar Pro, which sit in the same budget category as the M213AD-K8, but neither of the Roku soundbars do Atmos. Then again, the Roku units can be upgraded with additional speakers, unlike the M213AD-K8. So yes, there are a fair number of tradeoffs to navigate.

But if all you care about is putting Atmos in your bedroom with a minimum of fuss and expense, the Vizio M-Series All-in-One M213AD-K8 is tough to beat.

This review is part of TechHive’s coverage of the best soundbars.

The Vizio M213AD-K8 is a 2.1-channel soundbar, with a total of six drivers. Both the left and right channels get a tweeter and a full-range driver each, while the low frequencies come courtesy of two built-in three-inch woofers. There’s also a passive radiator to bolster the bass. The center channel is derived from the left- and right-hand drivers, which combine to create a “phantom” center channel for dialogue.

Does the Vizio M213AD-K8 support Dolby Atmos and DTS:X?

The M213AD-K8 supports the two main immersive object-based audio formats, Dolby Atmos and DTS:X. While the soundbar lacks upfiring drivers for bouncing Atmos and DTS:X height effects off the ceiling, it uses DTS Virtual:X processing to virtualize height as well as surround cues.

DTS Virtual:X has come a long way in only a few years, and the virtualization technology now does a credible job at tricking your ears into thinking they’re hearing audio effects from above, behind, and to the sides. Virtualization is also a great choice for those with ceilings that are too high, low, vaulted, or otherwise unsuitable for upfiring Atmos speakers. Still, those who want to hear the most precise immersive cues would be better off with a soundbar that does have upfiring drivers, and–ideally–surround speakers, too.

While some all-in-one soundbars (including both budget and higher-end models) can be upgraded later with a separate subwoofer or additional speakers, the M213AD-K8 can’t. That’s another good reason for relegating the Vizio to a second room.

Measuring 36 x 2.13 x 5.5 inches (WxHxD), the Vizio M213AD-K8 is relatively long and deep, but it’s also short enough to sit in front of most TVs without blocking the bottom of the screen. The soundbar itself is wrapped with a dark fabric covering, while the tapered A-frame design gives the speaker a pleasingly low profile.

Getting the Vizio M213AD-K8 up and running is simple. You can either place the soundbar directly in front of your TV, or you can mount it on the wall beneath your TV. A pair of wall-mount brackets and a mounting template are included.

There are a couple of options for connecting the M213AD-K8 to an HDMI-equipped TV.

First, you can connect the soundbar to your set via HDMI-ARC, which means you’ll be able to send audio from your smart TV apps as well as any TV-connected video sources (such as game consoles, Blu-ray players, and so on) down to the soundbar.

The other option is to connect a video source directly to the soundbar using its single HDMI input, and then send both video and audio up to your TV via the HDMI-ARC connector (4K HDR video passthrough is supported, including Dolby Vision).

It’s worth pointing out that it’s increasingly rare to see dedicated HDMI inputs on a budget soundbar; generally speaking, you only get the single HDMI-ARC connector (and that even happens with pricier soundbars, including models from Bose and Sonos). Another nice bonus is the M213AD-K8’s HDMI-eARC support, which allows for lossless Dolby TrueHD and DTS-HD Master Audio formats (providing your TV also supports eARC, that is)

If you have an older TV or you want to connect another audio source, the M213AD-K8 also has optical (Toslink) and 3.5mm auxiliary inputs, while the USB-A connector supports audio playback, but only for WAV and MP3 files.

Finally, there’s a dedicated 3.5mm jack for smart speakers, a nifty feature that Vizio has been putting on its soundbars for a couple of years now. Just connect a smart speaker like the Amazon Echo Dot, and the M213AD-K8 will pipe the speaker’s audio, including the voice assistant, through the soundbar’s drivers. Even better, the M213AD-K8 will lower its own volume when the voice assistant wants to speak. If your smart speaker doesn’t have an audio-out jack, you can connect it to the soundbar via Bluetooth.

While the Vizio M213AD-K8 does offer Bluetooth connectivity, it lacks Wi-Fi, which means you can’t cast audio to the soundbar via Apple’s AirPlay 2 or Google Chromecast, nor are there any built-in streaming video capabilities, as you’ll find on Roku’s Streambar and Streambar Pro soundbars.

Does the Vizio M213AD-K8 have a backlit remote?

The Vizio M213AD-K8 lacks the backlit remote that comes with Vizio’s pricier soundbars. Instead, it comes with a basic wand with a volume slider, a four-way navigation pad, and buttons for input select, mute, and Bluetooth pairing.

Other buttons let you toggle the night mode (which compresses the dynamic range of the sound for late-night viewing sessions) and the DTS Virtual:X mode.

Finally, you can cycle through the various EQ presets (Movie, Music, Game, and Dialogue) as well as adjust the bass and treble levels.

While the Vizio M213AD-K8’s remote is easy to use, it lacks the advanced functionality of the manufacturer’s backlit remote, meaning you can’t trim individual channel levels

So, can the Vizio M213AD-K8 compete with a higher-end all-in-one like the $449 Sonos Beam, or the $899 Bose Smart Soundbar 900? Not really, and unlike the Sonos and Bose soundbars, the M213AD-K8 wouldn’t be adequate for filling a medium-sized or larger living room with sound. But for a studio apartment or a bedroom, the Vizio would make for an excellent upgrade for your tinny TV speakers, serving up clean, well balanced sound, surprisingly punchy bass, a wide soundstage, and a decent amount of immersiveness.

Dialing up Star Wars: The Empire Strikes Back on iTunes, I was impressed by the M213AD-K8’s crisp (if a tad bright) delivery of John Williams’s score during the frantic Battle of Hoth, along with the zipping laser bolts, the satisfying booms of snowy explosions, and the thudding feet of the hulking Imperial Walkers. I could also detect subtle but decent height effects as the foot of an Imperial Walker hung perilously over Luke Skywalker’s head–think of it more as a sense of airiness rather than the precise height cues you might hear from a quartet of upfiring Atmos driver.

Next, I tried the UHD Blu-ray of Apollo 13, which has a DTS:X soundtrack (as opposed to the remastered Dolby Atmos sound for Empire). Jumping straight to the launch sequence, I was again impressed by the amount of sonic detail the M213AD-K8 managed to deliver, complete with the deep roar of the Saturn V’s engines as the rocket rose from the launch pad, James Horner’s stirring score, and some decent surround and height effects as the spacecraft shot out of the frame, seemingly over my right shoulder.

If I had to quibble, I’d say the M213AD-K8 has a tendency to push dialogue a tad, likely in an effort to keep the music and effects from drowning out the words. Indeed, I never had any trouble hearing what the on-screen characters had to say, but occasionally the dialogue crept up to an uncomfortably loud level relative to the overall volume.

For music, I teed up Taylor Swift’s hit “Anti-Hero” on Apple Music (played through an Apple TV), and the M213AD-K8 did a nice job with the Atmos-mixed track, delivering an enveloping soundstage, crisp vocals, and punchy bass. I also played Billie Eilish’s “Oxytocin,” and the Vizio’s woofers didn’t bobble the song’s big bassline, cranking out the beats with no signs of distortion or rattles. Granted, “Anti-Hero” and “Oxytocin” sounded much better played on my usual 5.1.2 home theater system (Polk Audio Signature speakers driven by a Denon AVR), but the soundbar easily dusted the performance of the built-in speakers on my LG C9 OLED TV.

Is the Vizio M-Series All-in-One M213AD-K8 worth the cash?

The Vizio M213AD-K8 delivers terrific Dolby Atmos sound for the price, making it a great way to boost the sound of, say, a bedroom TV or the set in a dorm room. For a larger living room, not so much, particularly given that the M213AD-K8 itself can’t be upgraded in any way.

If your TV doesn’t have smart apps or you need a streaming video player to go along with the experience, consider instead the Roku Streambar or Streambar Pro, which both come with built-in Roku players, and each pack pretty good sound quality–although no Dolby Atmos–for their budget price range.