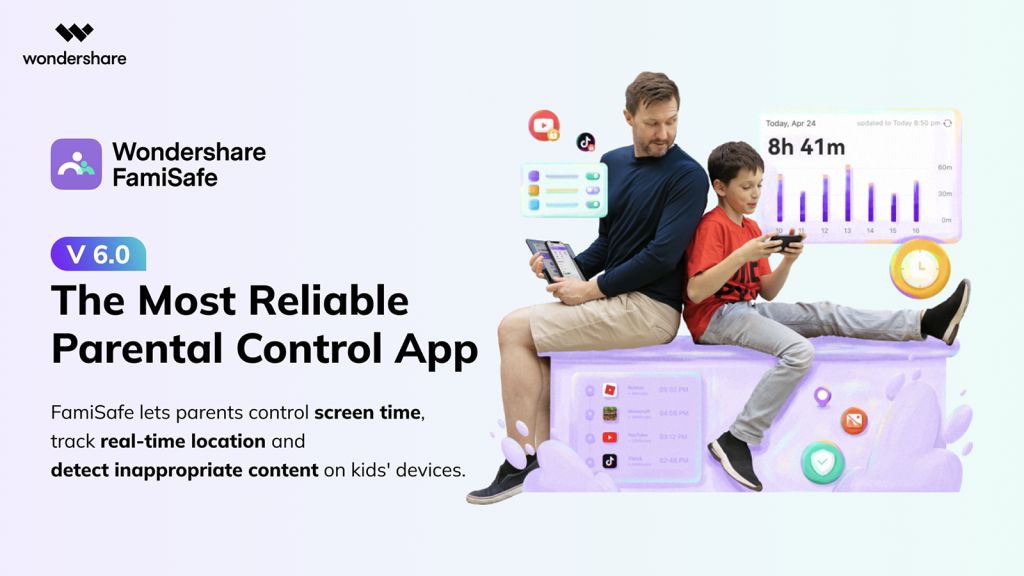 In moderation, none of that is bad. But we’re already starting to see signs that too much time on social media can have a negative impact on kids.

Simply asking your child to use their phone less, or even to turn it off for bedtime usually has little effect. Most kids are addicted to their devices and there’s little parents can do about it.

Fortunately, though, there is a solution: parental control software. With the right app installed, you can limit the amount of screen time your kids can have each day, and make sure the devices go off automatically before bedtime.

Devices themselves often have controls for screen time, but while Apple’s Screen Time on iPhones and Google’s Family Link for Android can work well, they both have one major limitation: they can’t work across all your child’s devices.

This is where Wondershare FamiSafe comes in. It works on iPhones, Android phones, Windows and macOS – plus Amazon Fire tablets – so that your kids are protected no matter which of their devices they pick up to use. If they’ve used up all the screen time you’ve allowed them on a particular day, they can’t simply switch from their phone to a laptop and carry on.

Excess screen time isn’t good for your kids’ eyes: among other things, starting at screens for hours on end usually leads to dryness because of the lack of blinking.

But screen time is only one way that FamiSafe can protect your children when they use phones, laptops and tablets.

Here are four more ways that it can help you as a parent:

1. It allows you to limit time on specific apps

As well as setting a daily allowance of screen time across devices and choosing when they are blocked for bedtime, FamiSafe allows you to block specific apps at certain times of the day, or even in certain places. For example, you could block TikTok and other social media apps while your child is at school, or during the evening when they’re supposed to be concentrating on homework or revision.

One particularly great feature is that FamiSafe allows you to whitelist specific apps that they can use during ‘downtime’. For example, you could allow them to still make phone calls while their phone is blocked, or use WhatsApp to chat to their friends: arguably a better use of screen time than mindless social videos.

2. It lets you see exactly what your child is doing on their device

If you ask your child – especially as they approach their teenage years – to hand over their phone so you can see what they’ve been looking at, which apps they’ve used and the messages they’re sending to their friends, they’ll almost certainly refuse, or put up a fight.

With FamiSafe, you can monitor this from your own phone. Its Activity Report gives you a breakdown of which apps they’ve used most, any new apps they install and which web pages they’ve visited.

Where most parental control apps can’t monitor TikTok, FamiSafe can. It will show you a list of all the videos and channels your child has watched or visited, so you know what sort of content they’re seeing.

It’s similar to YouTube: not only can see a full history of what they’ve watched, but you can see at a glance a list of any videos which could be potentially inappropriate.

Naturally, you’d prefer for your kids not to see inappropriate content in the first place. And FamiSafe can do that too.

As you’d expect, it works with popular web browsers – including Google Chrome – and will stop kids from visiting websites or web pages that it deems are inappropriate. You can tailor what it blocks, as well as approve specific websites.

FamiSafe can also detect inappropriate images in photo albums and send you an alert if anything is discovered, and you can take action to delete (or blur out) any offending pictures.

Plus, explicit content can also be detected in certain social media apps.

4. You can track your kids’ whereabouts

FamiSafe lets you see exactly where your child is at any given moment on a map. But to save you from checking the map, you can set up geo-fences and get automatic notifications when they arrive at a location such as school or home.

And in case you want to know where they have been on a particular day, there’s also a location history which shows exactly that.

You can try out FamiSafe completely free for three days and see exactly how it can help you keep your kids safe.

To find out more about FamiSafe, simply visit Wondershare’s website.