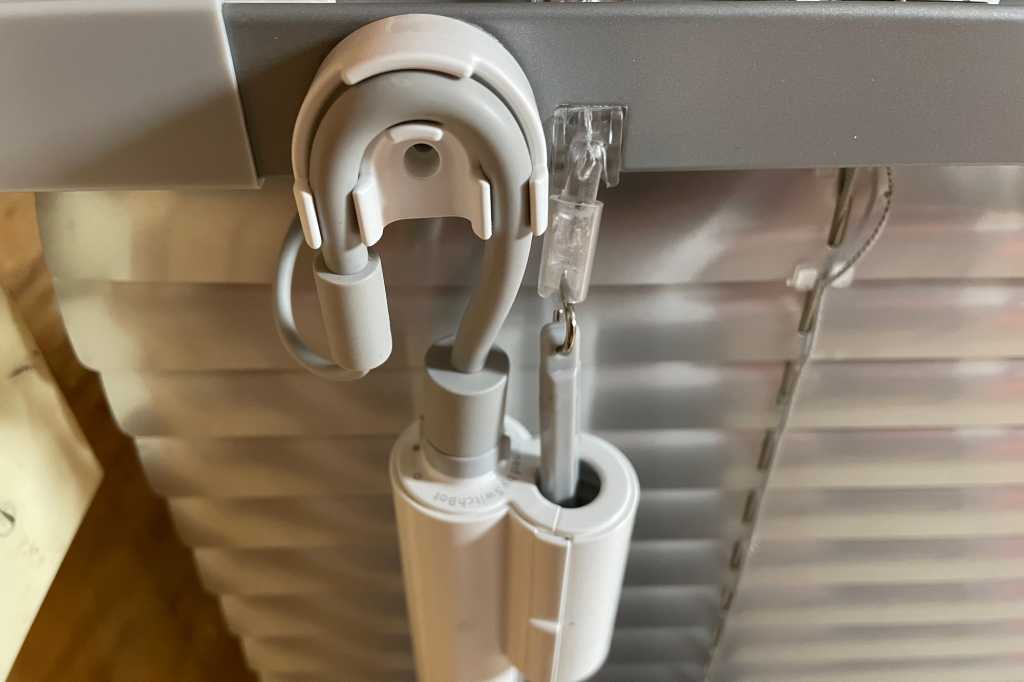 This smart mini-blind controller feels a bit hacked together, but it more or less gets the job done.

Automating in-place mini-blinds isn’t easy. While there are a few devices that can raise and lower fabric shades, devices that can change the tilt of the horizontal slats in a Venetian blind that’s already mounted to your window are hard to come by. So far, we’ve tested only one, the Sunsa Wand, which works reasonably well, but lacks finesse.

Now there’s a competitor from SwitchBot, a company seemingly intent on turning every last device in your home into a smart device, even if it requires something of a kludgy product to make it work.

This review is part of TechHive’s coverage of the best smart shades and blinds.

The SwitchBot Blind Tilt is a single-purpose product a lot like the Sunsa Wand, designed strictly to change the tilt of the slats instead of moving the shades vertically. This turns out to be a challenging technical problem, because making the plastic wand spin is hard to do without having something to hold on to as an anchor. For the Sunsa, that meant replacing the wand altogether and attaching its own battery-powered wand to a small arm stuck to the top of the blinds with sticky tape.

SwitchBot offers a slightly different solution. With the Blind Tilt, you keep your existing wand, but you wrap it with additional hardware that allows it to turn. Setup here is considerably more involved than the Sunsa, starting with the requirement that you measure the circumference of your wand and attach the appropriate adapter (3 are included) to it at just the right spot with adhesive tape. A coupling gear then wraps around this adapter, which in turn slips inside the motorized unit. The motor doesn’t itself attach to anything for leverage but rather uses a cable that sticks out the top of the motor and attaches to the included solar panel.

You don’t have to use the solar panel, as the device can be periodically recharged via a USB-C cable, but you do need the cord that attaches the solar panel, which you channel through an adhesive clip that holds it in place.

As I said, it’s a slightly complex setup that requires attention to detail, but when you’re finished, you have a motor that grips your existing wand with one arm and holds on to the mini-blinds’ frame with the other. Unfortunately, in regular use, this doesn’t translate very well, as the flexible cable doesn’t provide enough support for the motor to keep from listing to either side as it attempts to turn the wand. The result sees the motor shifting around to the front or back of the wand as it strains against the flexible power cord, causing it to press up against the blinds and which in turn smashes the slats out of position and eliminates the point of tilting them to begin with. And while I thought the Sunsa Wand looked less than elegant, the SwitchBot setup looks decidedly hacked together.

The good news is that it does at least work, more or less, and in my testing through the SwitchBot app it was able to quickly shut and open blinds—either fully open or closed or some level in between (these settings are customizable). Calibration is quick and easy, the app’s scheduling and timer systems all work fine, and there’s even a light-sensing mode that works with the solar panel to let you automate shade movements based on brightness. (Unfortunately my testing was not done in a heavily-sunlit window, so I couldn’t fully experience this feature.) Also, unlike the Sunsa, the SwitchBot has the advantage of manual operation. The wand can still be turned by hand, although you’ll probably need to use a second hand to hold the motor in place while you do it.

As with other SwitchBot devices, if you have a SwitchBot Hub you can use the device over a Wi-Fi connection—and by extension, with Alexa, Google Home, SmartThings, and IFTTT. Otherwise, it’s strictly a Bluetooth affair. Fortunately, the device is cheap: It’s less than half the price of the Sunsa Wand during its Kickstarter pre-sale, and only $69 once it goes full retail. While it’s an imperfect solution, it is at least one that works with a modest level of success. If you don’t mind the top few slats of your blinds being smushed and out of sync with the others, it could work as a basic smart blind solution.