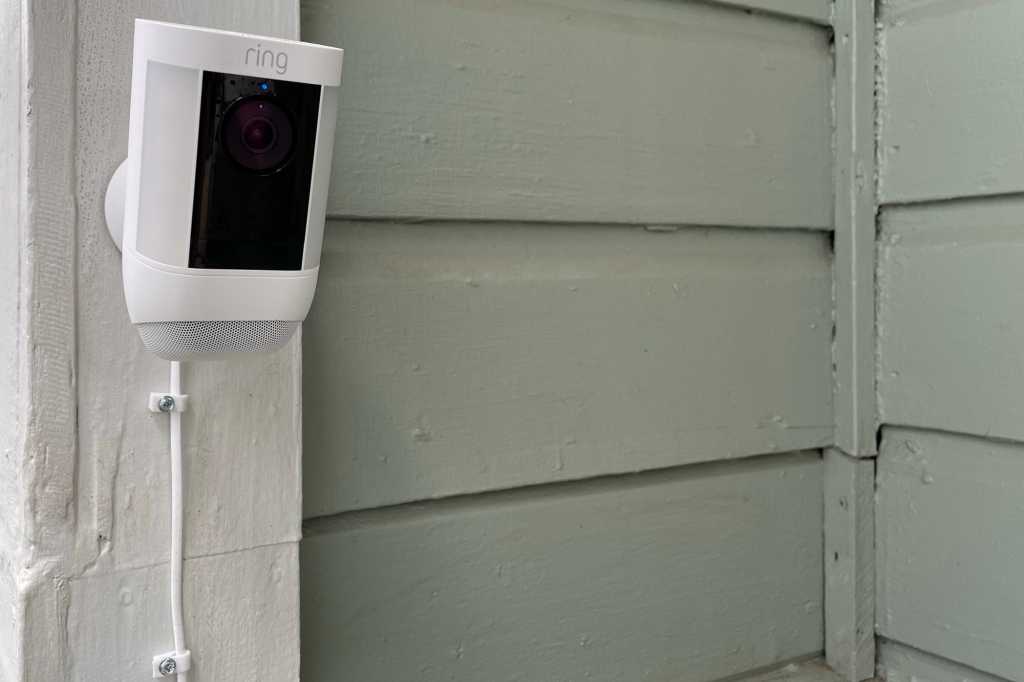 Bird’s Eye View is an oversold feature, but the Pre-Roll view it competes with is more valuable anyway. Beyond that, the Ring Spotlight Cam Pro offers plenty of features and performance to earn our strong recommendation—unless you’re a Google Home or Apple HomeKit afficionado.

The Ring Spotlight Cam (the Plug-In model is reviewed here) offers a host of new and innovative features, including radar-based motion detection. And that’s the basis for the camera’s most-hyped feature—Bird’s Eye View—an aerial map of the motion events that triggered the camera to turn on its dual spotlights and/or record a video event. The Ring Spotlight Cam is a great home security camera, for reasons we’ll explore in depth, but I found Bird’s Eye View to be its least compelling feature.

Here’s why: Bird’s Eye View depends on the Ring app’s picture-in-picture mode, but so does Pre-Roll, which allows the camera start recording a few seconds before the camera’s motion detection sends you a push notification. You can enable either feature in the Ring app, but you can’t have both at the same time. Picture-in-picture mode works just as it does on your TV, with either pre-roll or Bird’s Eye View displayed in a small window overlaid on the larger main view. Tap on the small window and it will swap places with the larger one.

Bird’s Eye View sounds like a great feature: It shows you the path a visitor—or prowler, as the case may be—took while they were in motion detection range, even before that motion has triggered the camera to send you a notification. But what would you rather see, an aerial view of your property with a series of animated dots overlaid on it tracking a visitor’s path? Or video of the person moving in the camera’s view before you received a push notification?

I’m not saying the Ring Spotlight Cam’s radar-based motion detection is a gimmick—the technology makes for more accurate motion detection and fewer false alerts. You can also restrict motion alerts so they’re triggered only by people, while other movement—from animals and cars, for instance—is ignored. I just found Pre-Roll to be a more compelling application than Bird’s Eye View.

The Ring Spotlight Cam Pro can operate on AC from an outlet (the $230 Plug-In model, reviewed here) or from hardwired AC power (the $250 Wired model is a good option if you’re replacing an existing fixture). If AC power isn’t available, there are two models that run on battery power (the camera has a chamber that can accommodate one or two of the quick-release rechargeable batteries that Ring uses in its doorbells and other battery-powered cameras).

Each of the two battery-powered options come with one quick-release battery: the $230 Battery and the $250 Solar, with the latter adding Ring’s second-generation solar panel to trickle-charge its battery(ies). The specs and operation of the lights and camera are otherwise identical, and you can add batteries to either of the AC-powered models.

The battery-powered models are the easiest to set up, simply because you don’t need to find a nearby outlet or wrangle a cord. Any model can be mounted to either a vertical surface, such as a wall, or a horizontal surface (e.g., a roof eave). Ring also sells accessories for mounting to objects such as a rain gutter or a pole. You can tighten a security screw to make it harder for a thief to steal the camera’s battery, but it doesn’t take a Herculean effort to pop the camera out of its socket mount.

The obvious advantage of the AC-powered model is that you never need to worry about batteries going dead. Ring provides a generously long power cord (I measured it to be roughly 18 feet) with a USB-C connector at the camera end, a two-prong plug at the other end, and an in-line power supply so you don’t need to worry about jamming a wall wart into the bubble cover on an outdoor outlet. In addition to the screws you’ll need to mount the camera, Ring also provides cable clips to keep things neat, although I needed to supplement what came in the box with some cable staples I had in my basement.

You’ll need the Ring app on your mobile device (Android or iOS) to add the spotlight camera to your Wi-Fi network. This is a simple matter of opening the app, tapping the menu bar on the left-hand side of the app and then selecting Set Up a Device, choosing the Security Cams option, and then scanning the QR code on the camera. You’ll need to provide your Wi-Fi network credentials (dual-band—2.4-/5GHz networks are supported), but if you’ve previously installed any other Ring devices, the app will automatically apply that information to your new camera.

As with other Ring security cameras and doorbells, you will only get a live view from the camera unless you sign up for a Ring Protect subscription plan. The Basic plan, which covers a single camera or doorbell, costs $3.99 per month or $39.99 annually. The Plus plan costs $10 per month or $100 a year, but it covers an unlimited number of Ring products. The Pro plan that most Ring Alarm and Ring Alarm Pro users likely subscribe to covers all Ring device and includes professional monitoring that can dispatch first responders in the event of an emergency. That tier costs $20 per month or $200 per year.

If you do have a Ring Alarm Pro system, which offers an integrated Eero Wi-Fi mesh router, you’ll have the option of plugging a microSD card into that base station. The video from any or all your compatible Ring cameras and doorbells will then be processed and stored locally, as opposed to being uploaded to the cloud. I’ve italicized “compatible” because it’s worth noting that several relatively new Ring products, including the Ring Video Doorbell 4 and the Ring Floodlight Cam Wired Pro, are not compatible with Ring Edge (you’ll find details at the preceding link).

The Ring Spotlight Cam Pro’s camera captures video in 1080p resolution with high dynamic range (HDR) color. Its lens has a 140-degree horizontal/80-degree vertical field of view, and its customizable motion sensors deliver up to 30 feet of range. You can also create up to two privacy zones that will overlay a black block over areas that you don’t want to monitor—a neighbor’s door or window, for instance—when you stream a live view or watch a recorded clip.

In addition to motion-activated recordings, Ring’s Snapshot Capture feature will periodically snap a still photo every 30 seconds, every minute, or every three minutes (your choice, including turning it off to preserve battery life). View the camera in the Ring app, and you can scrub back and forth on a timeline to view these snapshots stitched together, stop-motion-animation style. Yet another way to trigger a recording is to link the camera to other Ring devices, including other cameras and smart lighting devices. In this fashion, motion detected by the Ring Alarm Pro at one location can trigger that camera to record and at the same time trigger any other Ring camera to record, and it can trigger any of your Ring smart lights to turn on in and around your home.

And because Ring supports IFTTT (If This, Then That), these triggers can go out to any third-party smart home devices that also support that service. I set up an IFTTT applet so that if someone rings the Ring video doorbell at my side entrance, that camera will record a video clip, the Ring Floodlight Wired on my deck will turn on, the Hue lights inside the house above the side door will turn on, and the Sonos speaker in my home office will play music.

The Ring Spotlight Cam Pro supports two-way audio support with noise cancellation, so you can speak to someone near the camera, and there’s a remote-activated siren should you want to deter that person from hanging around.

Ring isn’t perfect when it comes to third-party support, however; for starters, you can’t easily integrate Ring products into Apple’s HomeKit ecosystem. It can be done, but it involves third-party hardware and a bit of poking around. Ring is also only partially compatible with Google Home hardware. You can’t view a live stream from any Ring camera on a Google Nest smart display, for instance. For the time being, if you decide to set up Ring home security products, you should plan to use Amazon Echo-compatible smart speakers and displays with them. Here’s hoping Matter eventually makes those kinds of interoperability issues go away.

The spotlights on either side of the Spotlight Cam Pro can be turned on and off on demand, programmed to turn on when it’s dark and motion is detected, or programmed to turn on and off according to a schedule. The twin spotlights are much less powerful than those of the permanently-wired-to-power Ring Floodlight Pro—562 lumens when plugged in, compared to 2,000 lumens for the larger camera—but the Spotlight Cam Pro is much less visually intrusive.

Both devices produce a relatively warm white light of 3,000 Kelvin. While you don’t get the option of multi-colored light, you can dim the Spotlight Cam Pro if you’re entertaining guests and don’t want the patio to look like a prison yard. In addition to excellent black-and-white night vision, the onboard will record video in full color at night when its dual spotlights are turned on.

The Ring Spotlight Cam Pro is a good value

Don’t let my criticism of Bird’s Eye View dissuade your from buying the Ring Spotlight Cam Pro—you might even find that feature to be the bee’s knees—or at least more important than the Pre-Roll feature it competes with. This camera records high-quality video—albeit at only 1080p resolution—under all the circumstances you might want, it’s easy to set up, and it can be easily integrated into the Ring and Amazon Alexa ecosystems, with hooks to an even wide array of third-party products and systems via IFTTT.

Be aware, however, that you will need a Ring subscription to get full use out of it. A security camera isn’t very useful if you can only view a live feed from it. Speaking of live feeds, the Ring Spotlight Cam Pro is probably not the right solution if your smart home revolves around Google Nest or Apple HomeKit.