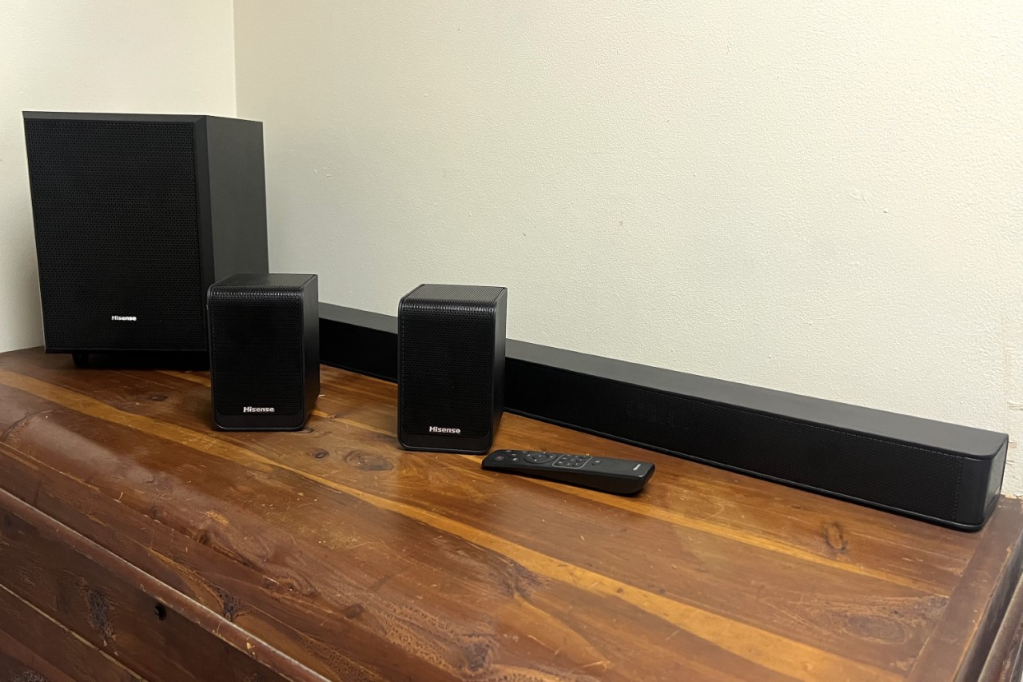 Hisense has built a wealth of features into this value-priced soundbar, but the poor audio quality is a deal-breaker.

Hisense has been making a name for itself in the value-price television market, with excellent models like the U8H smart TV that earned a rave review here at TechHive. Inspired by that review and their excellent 43-inch Class A6 Series LED 4K UHD TV that I’d purchased earlier, I bought a U8H TV for myself and have been delighted by the quality Hisense delivered for the price.

That’s a way of explaining how much I was looking forward to reviewing the Hisense AX5100G 5.1 soundbar with subwoofer and surround speakers. If the manufacturer has cracked the value code for televisions, I really wanted to see what kind of quality they could deliver in a $250 surround system with 340W max audio power, Dolby Atmos, and DTS:X.

This review is part of TechHive’s coverage of the best soundbars.

[Editor’s note: At the time of publication, the Hisense AX5100G was unavailable for purchase; a Hisense spokesperson said the soundbar will be back in retails channels before the end of the year.]

How big is the Hisense AX5100G soundbar?

Also in the box are AC power cords for the soundbar, the subwoofer, and one of the two rear surround speakers. There’s a 3.5mm RCA audio cable to connect the two rear speakers. You also get an HDMI cable, an optical cable, four wall brackets with screws, a remote control, and 2 AAA batteries for the remote.

That’s a lot of gear for the money, right? Well, the experience starts to fall apart when you take everything out of the box. The soundbar and the rear speakers have cabinets made of alarmingly thin plastic and their grilles are made of exceedingly thin perforated metal. The subwoofer cabinet is made of a low-grade MDF (medium-density fiberwood) with the same metal grille.

The build quality echoes those off-brand electronics behind the counter at a 24-hour drug store–the kind of products you only buy in an emergency when it’s 2 a.m. and everything else is closed. Tap on the rear speaker grille and you get a hollow plastic thump with a hint of metal on the high end. Tap on the subwoofer’s speaker grille and it sounds like one of those metal sheets that theatrical stagehands use to generate storm noises.

The next step was to hope that the speakers sound better than they look. After all, Hisense promises a wealth of features and they’ve managed to deliver televisions that perform far above their price points.

With an eARC connection to the soundbar’s HDMI port, Hisense promises compatibility with a wide range of audio formats, including LPCM (2, 5.1, and 7.1 channels), Dolby Atmos, Dolby TrueHD, Dolby Digital Plus, Dolby Digital, and eight flavors of DTS, including 96/24 (24-bit/96 kHz) and DTS:X.

Regular HDMI-ARC supports 2-channel LPCM, Dolby Atmos (Digital Plus version), Dolby Digital Plus, and four kinds of DTS, including 96/24. If you have an older television, both optical and coaxial connections support the same four DTS formats and 2-channel LPCM.

How many HDMI ports does the Hisense AX5100G have?

The rear of the sound bar has an HDMI port for ARC or eARC connections. There’s a USB port that allows you to insert a thumb drive for music playback, as well as AUX, optical (Toslink), and coaxial ports if you’re wanting to use the Hisense AX5100G with an older television.

The best news about the Hisense AX5100G was that everything paired up seamlessly when it was plugged in and powered up. There are instructions about how to enter pairing mode for the subwoofer and the surround speakers, but the system I tested handled the pairing automatically and was ready to go on its own.

Does the Hisense AX5100G soundbar come with a remote?

The remote control gives access to the various settings, so let’s describe them by looking at the remote. There’s a source button that allows you to switch between inputs, while a Bluetooth button lets you pair the soundbar with a phone or tablet for easy music playback. A surround button allows users to turn surround on and off, and the EQ button switches between settings for music, movie, news, sports, nighttime viewing and gaming.

The center controls handle volume up and down, plus play, pause and skip functions if you’re using Bluetooth or USB inputs for music playback. The bottom row of buttons allow control for bass, treble and the brightness of the soundbar display. There’s a mute button at the bottom of the remote.

Is the Hisense AX5100G a Roku TV Ready soundbar?

If you own a Roku TV, the Hisense AX5100G soundbar has been certified as Roku TV Ready.

That means the product has been designed to work seamlessly with Roku TVs, including an on-screen setup wizard and the ability to access the soundbar’s settings from the Roku on-screen interface or the Roku remote.

How is the Hisense AX5100G’s sound quality?

After pairing with my iPhone via Bluetooth, I listened to the Paul McCartney & Wings’ 1973 album Band on the Run streaming from Apple Music. Where to start? The wall of acoustic guitars that kicks in about halfway through the title track were tinny and harsh. The top end of McCartney’s vocal range had a sharp and unpleasant edge through both the soundbar and the rear surround speakers.

Granted, the album was made under difficult conditions and the recordings have always suffered from the technical issues that bedeviled the band when they chose to record it at EMI’s primitive studio in Lago, Nigeria, but those issues can’t explain away how muddy the low end sounds through the subwoofer. Making matters worse, the Bluetooth connection was balky and inconsistent, with an unforgivable number of dropouts during playback.

The next step was to switch to Apple Music on a 4K Apple TV and try again via the eARC connection from my Hisense U8H smart TV. The signal depth saw an immediate improvement and the overall experience was much improved, if not quite a good one. The harshness in the upper registers and mud in the bottom end were still there, a function of the materials used to build the cabinets.

The Hisense AX5100G did a more than adequate job of reproducing the object-based placement of sound that Dolby Atmos promises, even if it lacks the upward-firing drivers required for true Atmos height cues; instead, the soundbar relies on virtualization for height cues.

Ultimately, though, no amount of processing can make up for the poor quality of the speakers. Audio at the top of the spectrum while watching Bullet Train had the same sharp and unpleasant quality that ruined the experience when listening to music.

Would better-quality housing for the speakers have pushed the price for the AX5100G to a point higher than Hisense thought the market would support? Maybe, but what we’re stuck with here is a feature-packed speaker system that doesn’t sound good at all.

Is the Hisense AX5100G worth the cash?

Even if you’re on a limited budget and want to take advantage of the latest audio formats with your streaming television, the painfully mediocre Hisense AX5100G simply isn’t worth your money. Instead, take a look at an alternative like the Vizio M51ax-J6 5.1 soundbar setup, a product that has the same speaker array for just a few more dollars.

Hisense has displayed the ability to make great products at bargain prices. Let’s hope they get it right with their next surround sound offering.