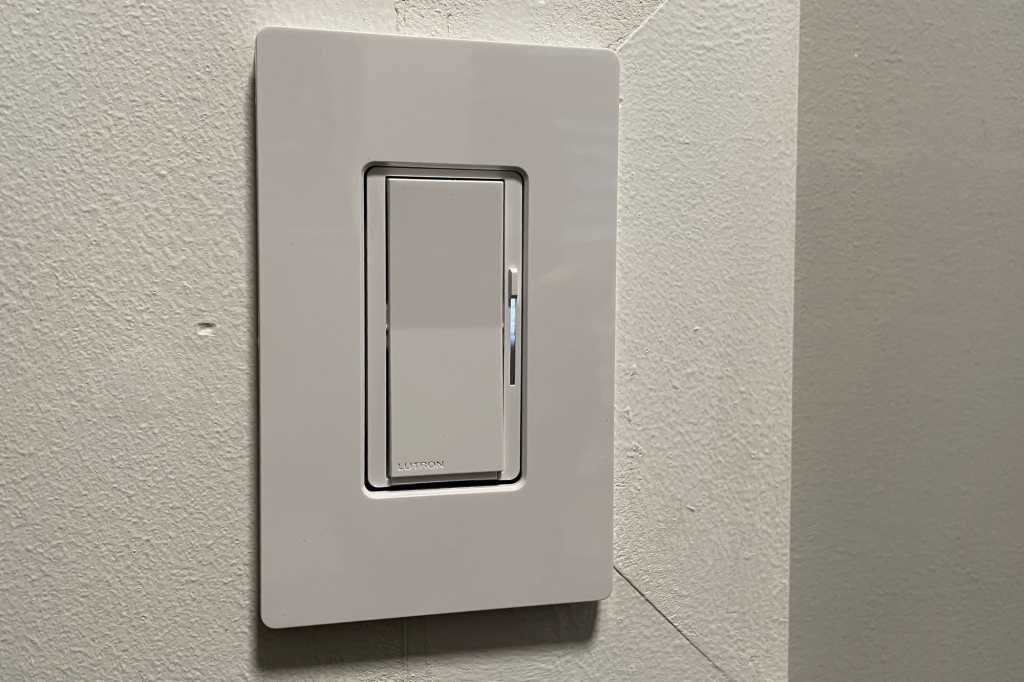 Lutron has the strongest smart lighting ecosystem on the market, and its Diva smart dimmer packs a boatload of features into its understated design. The Caséta system is so inclusive that we see no reason to be concerned over Lutron’s currently uncertain stance regarding Matter.

Lutron makes our current favorite smart lighting controls, but for some, the four symbol-festooned buttons on its Caséta Wireless dimmers look busy and, well, geeky. The new Lutron Diva Smart Dimmer is just the opposite. It looks exactly like Lutron’s conventional dimmer: a simple paddle switch with a physical slider on the right-hand side to control dimming. But there’s a whole lot of smarts beneath that understated design.

To take full advantage of what the Diva can do, you’ll need to have Lutron’s Caséta Smart Hub hardwired to your router. The upside of that requirement is the diversity of the Caséta ecosystem and the broad third-party support that Lutron offers. Besides managing lights, the Caséta hub can control Lutron’s excellent Serena smart window shades and blinds and any brand of ceiling fan that can be controlled by Lutron’s in-wall fan controller. There are indoor and outdoor Caséta smart plugs and a wall-mounted motion sensor, too.

Lutron sells the Diva Smart Dimmer by itself for $69.95 (hidden-screw wall plate included) or in a starter kit with the Caséta Smart Hub, Lutron’s Pico remote, and a Pico wall bracket for $119.95. The Pico remote has five buttons: on and off at the top and bottom of the remote respectively, two buttons in the middle for dimming, and a raised button in the middle that can be programmed to turn the lights on at a memorized dimming level. The wafer-thin Pico remote can be used to set up three-way control over the load connected to the Diva (or Caséta dimmer), and the wall bracket can be mounted to the wall without needing to cut any holes.

You’ll obviously want to turn the power off at the circuit breaker before you install the Diva Smart Dimmer. The dimmer connects to your home’s wiring—line, load, neutral, and ground—using pigtails and wire nuts. While those pigtails are color coded, you only need to know which wire inside the box in your wall is ground (typically green or a bare copper wire) and which is neutral (typically white). And if you don’t have a neutral wire in the box, don’t worry. Unlike many smart switches, the Diva’s onboard radio uses so little power that it doesn’t a neutral wire.

If the switch you’re replacing does have a neutral wire connected to it, tie it to the blue wire on the Diva; otherwise, just cap the blue wire with a wire nut. As for the line wire (carrying electricity to the switch) and load wire (sending electricity to the light you want to control), you can connect the Diva’s black and red pigtails to either of them and the dimmer will automatically figure out which is which. The Claro wall plate included in the box is a two-piece affair consisting of a panel that you screw to the switch, and a second piece that snaps to the first to cover it and hide the screws.

If the switch you’re replacing with the Diva is on a three-way circuit, where a switch in another part of the room can control the same load, your existing mechanical switch will continue to operate as normal once you install the provided jumper wire. Alternatively, you can replace that switch with a battery-powered Pico remote. The remote, a bracket to mount it to your existing in-wall box, and a Claro wall plate costs $30 retail (and you might find it selling online for much less). This gives you the ability to control the load (on/off as well as dim) from both locations, whereas a switch will only turn the load on or off. On the downside, you’ll periodically need to replace the Pico remote’s coin cell battery.

Once the Diva Smart Switch is wired, mounted to the box, and you’ve restored power at the breaker box, you’ll see an LED light bar next to the slider on the right-hand side of the slider. This light bar remains dimly lit when the load is turned off, which makes the switch easy to find in the dark. As you move the slider up and down to brighten or dim the light, segments of this LED will light up or darken accordingly. If you find that the LEDs contribute to light pollution in your room, you can program the switch so that the LEDs are on only when the controlled light is turned off, or you can program them to be turned off altogether.

As you’d expect, pushing the top half of the dimmer’s paddle turns the controlled light on, while pushing the lower half turns the light off (fading up and down respectively). When it turns on, the light will be at whatever level of brightness the slider is set to. Press the upper paddle a second time, and the light will increase to full brightness regardless of the slider’s position. This is a great feature because it lets you set a default level of dimness, but a tap delivers full brightness without fiddling with the slider or changing that default level.

The Diva Smart Switch supports LEDs up to 150 watts and incandescent and halogen lamps up to 600 watts. I tested it with a single recently purchased LED ceiling fixture and it had no problem dimming the load to almost completely off without inducing flicker. Older LED bulbs or fixtures might not perform as well with a dimmer switch, but the technology improved considerably over the years. You can use a “trim” feature in the Caséta app to set minimum and maximum brightness levels, whether you’re looking to save energy by reducing max brightness or you find the bulb or fixture you’re controlling is flickering at low brightness.

Using the Diva Smart Dimmer with the Caséta Smart Hub

Unlike smart dimmers that operate over your Wi-Fi network, Lutron’s Diva Smart Dimmer uses Lutron’s proprietary Clear Connect RF tech. This means you’ll need the Lutron Caséta Smart Hub if you want to take full advantage of what this dimmer has to offer. As I’ve already mentioned, the Caséta Smart Hub must be hardwired to your router using an ethernet cable. That can present an issue if you have one of the newer routers that have just two-port ethernet switches: You’ll probably need one of those ports to connect to your ISP’s broadband gateway, and the other might already be occupied by any number of other devices: a Hue Bridge, a home-security system, or a NAS box, for instance. Fortunately, high-quality unmanaged ethernet switches are very inexpensive. At the time of this writing, Amazon was selling an 8-port gigabit switch from Netgear (model GS308) for just $22.

Once you have the Caséta Smart Hub set up and you add the Diva Smart Dimmer to it, you open an entire world of control and integration possibilities. For most people, the first integration they’ll want to take advantage of is with their smart speaker, so they can turn the lights on and off with voice commands. As I’ve already mentioned, Caséta devices—including the Diva—are compatible with Amazon Alexa, Apple HomeKit (Siri), and Google Assistant.

Beyond turning the switch on and off, you can also ask your digital assistant to set your controlled lights to defined brightness levels. Using Alexa, for instance, I was able to say things like “Alexa, set the bedroom light to 45 percent,” and the Diva would set the brightness to that level regardless of the position of the physical slider. With Lutron’s Ring integration, you can program the dimmer to turn on the light(s) it controls if someone rings your doorbell or when your security camera detects motion. And with IFTTT, you can program any device that also supports IFTTT to do something similar with Caséta devices, including the Diva.

Since the Caséta app supports geofencing, you can program controlled lights to turn off when you leave home and turn on again when you return after dark. Add a Sonos speaker into the mix, and you can home to your favorite music. It’s also easy to create automated lighting scenes based on schedules—including sunrise/sunset routines—and there’s an “smart away” mode that will turn lights on and off at random times to make your home look occupied while you’re away. If you have Serena smart shades, you can program them to close; and you can program your Sonos speakers to play, furthering the impression that someone is in the house.

Is the Lutron Diva the best smart dimmer?

The Lutron Diva—and Lutron’s Caséta ecosystem in general—are our top picks for smart lighting. The one issue that might give you pause about buying Lutron’s system is the lack of clarity when it comes to the recently ratified Matter smart home protocol. Lutron is part of the Connectivity Standards Alliance that developed Matter, but the company hasn’t said how or if it will incorporate it. Personally, I don’t think that will make any difference. Caséta is a robust ecosystem, and it can be integrated into all of systems that Matter will. The Diva smart dimmer itself is easy to install, easy to control, and it performs supremely well. It’s the smart dimmer to buy.