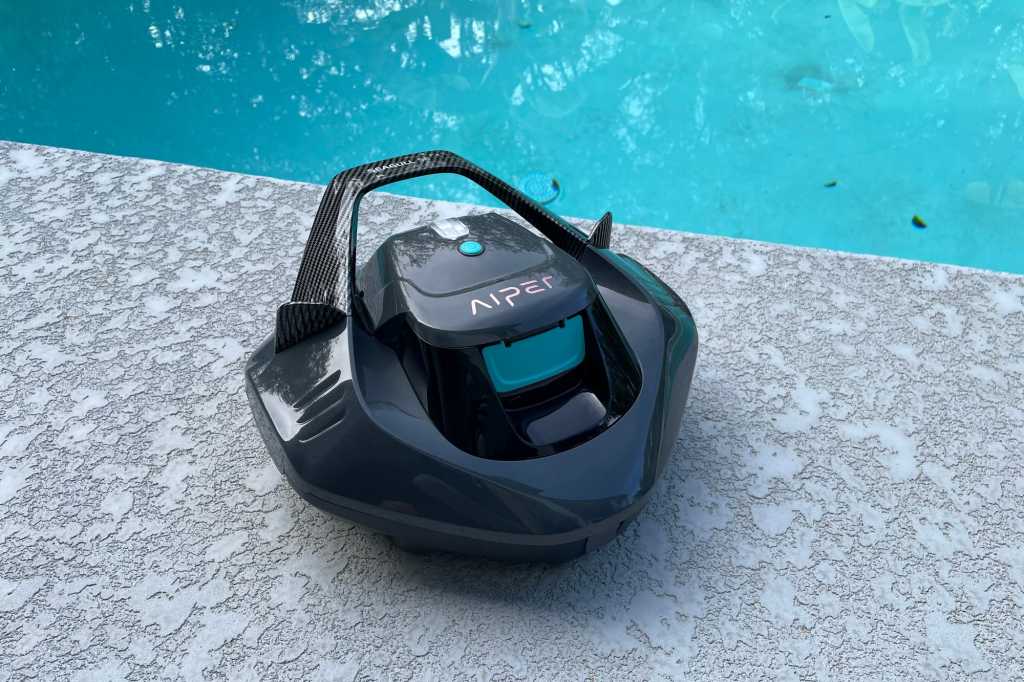 This robot is an affordable helper around the pool, but those desiring a 100 percent clean pool will need more sophisticated gear.

Somewhere in the last decade or so, swimming pools got the Roomba treatment. Consumers no longer need to deal with a bulky Polaris and its snaking white hose to clean their pool. Now they can drop a battery-powered robot in and send it on its way to pick up leaves and debris. Luxe models can cost well into the $1,000 range.

Aiper has been in the robotic pool cleaning business for years, with a half-dozen robots on the market, some more elegant than others. Its most streamlined to date is the new Seagull SE, a sleek device that ditches the WALL-E aesthetic of its prior models in favor of a gray color scheme and a more angular appearance.

Like most of these devices, the Seagull SE is designed to be charged on land (charging time is about 2.5 hours), then dropped into the pool when it’s ready to go. The robot runs around for about an hour and a half, scooping up whatever debris it finds and depositing it into an internal holding tank. Clean it out, dry it off, charge it up, and you’re good to go again the next day.

Like a terrestrial cleaning robot, the Seagull SE doesn’t take much effort to get going, and instructions are largely self-explanatory. A pair of brushes must be snapped onto the bottom of the device, but otherwise it’s ready to go out of the box save for charging it up with the included cable.

Aiper includes some basic caveats—your pool can’t have gently sloping corners at the base (lest the robot try to drive up the wall and tip over), and max surface area is roughly 850 square feet—but otherwise the guidelines are basic. You can insert a chlorine tablet into a special container on the device if you’d like it to do double duty as a chemical dispenser, but this is strictly optional.

As it happens, a wheel fell off my traditional Polaris cleaner the day before the Seagull SE arrived, so I had a fresh pool full of leaves in which to test. After a full charge, I let the robot get to work, and found it was quite efficient at getting around the pool, making large arcs and sweeping up about 90 percent of the debris in its 90-minute running time. The device struggled a bit with larger leaves that my Polaris doesn’t balk at, but by and large the pool was what I’d consider “clean” when it was finished.

Getting a robot cleaner out of the pool is a bit of a trick, and the Seagull SE is supposed to park itself near the edge when its battery is about to die. Unfortunately, this didn’t work out in my testing: The Seagull ended up close to the dead center of the pool. Fortunately, it was still easy to reach with the included hook, which snaps on to the end of a standard telescoping pool cleaning pole. (A pair of spare wheels are also included in the box.)

Cleaning is a bit of a headache in comparison to the minimal maintenance and large holding bag of a standard Polaris cleaner, involving disassembling the device, scooping out the collected leaves, and hosing off the filter to get it ready for the next time out. When things are wet, this is a rather messy job (and figuring out how to reorient everything when you reassemble it can be confusing), but there’s probably a significant flattening of the learning curve when you do this regularly.

At just $250, the Seagull SE is a much cheaper alternative to many robotic cleaners—and traditional water-powered cleaners—although it isn’t as flexible as a permanent in-pool solution. It cleans almost as well, but the requirement of daily instead of weekly maintenance is a big one. Ultimately, I replaced the wheel on my Polaris and put it back to work as a comparative: There are zero leaves in the pool when I get up in the morning after just a couple hours of running time. That, however, depends on the weather; and by the way, I’ll probably use the Seagull SE in the long run as a backup for the days after big storms when I wake up to a pool full of leaves, putting the robot to use as a secondary cleaner in lieu of manually scooping up the leaves the Polaris didn’t get to.