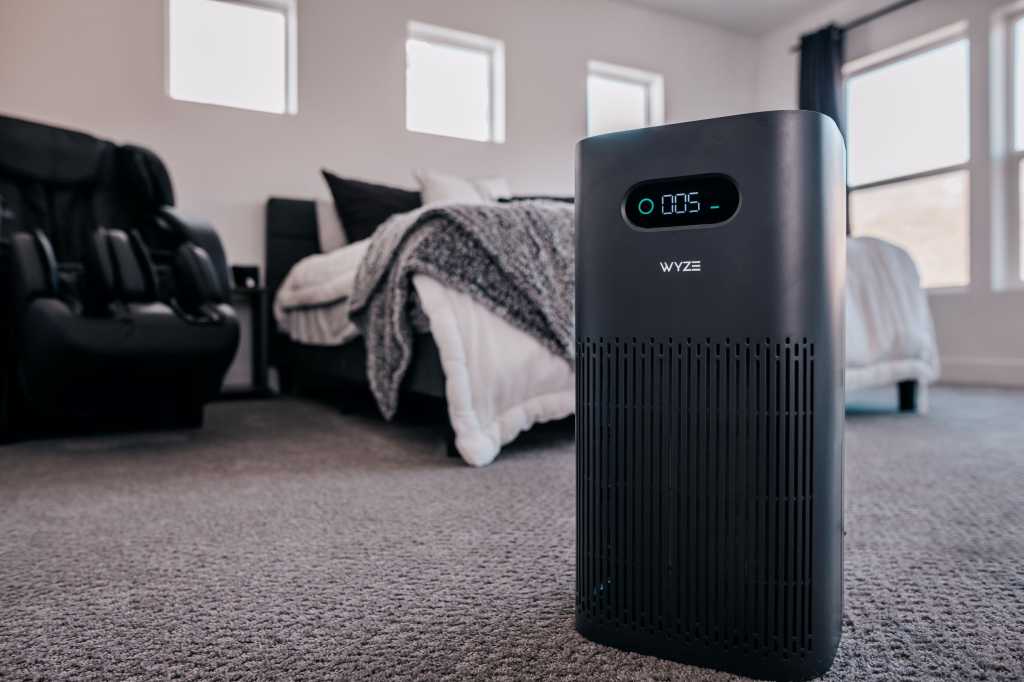 It may be big and loud, but the Wyze Air Purifier is powerful enough to scrub the air in a large room, and the price is right.

At 9.5 x 9.4 x 18.5 inches (WxDxH), the Wyze Air Purifier is much larger than the Clorox Alexa Smart Tabletop Air Purifier but one-third the size of the NuWave OxyPure Smart Air Purifier floor model. The Wyze’s bland design will blend into most decors and disappear into the corner of a room, although Wyze engineers recommend placing it at least 20 inches from a wall. An inset handle in the back makes the 9.1-pound unit easy to pick up and move.

Air flows into the front of the Wyze Air Purifier through a two-stage HEPA filter, and the cleaned air comes out of a top vent that points straight up (there are no manual or powered louvres to aim the cleaned air flow). Inside, the purifier has a laser dust detector that measures particulates down to 0.3 microns wide.

This review is part of TechHive’s in-depth coverage of home air purifiers.

How powerful is the Wyze Air Purifier?

With a Clean Air Delivery Rate (CADR) of 350 cubic meters per hour, the Wyze Air Purifier roughly on a par with the cleansing ability of the NuWave OxyPure filter and has a flow rate that’s five times higher than the Clorox filter. The Air Purifier can exchange up to 12,000 cubic feet of air per hour, making it powerful enough to replace the air in a typical 500 square-foot room about three times an hour.

The Coclean HEPA filter comes in three styles. The standard allergen filter removes 99.97 percent of dust in the air, while a “wildfire” filter (sure to be popular out West) can catch up to 98.9 percent of hydrogen sulfide released by a fire. Finally, the formaldehyde filter can trap up to 97.3 percent of organic solvent vapors. According to Wyze, each filter should last between two and six months, depending on how dusty the area you live in is; replacements cost between $35 and $60.

How are the Wyze Air Purifier’s display and controls?

The Air Purifier’s 3.6-inch color screen displays pertinent information about the device’s status, from its power state and current air flow setting to whether it’s connected to Wi-Fi. An Air Quality Index (AQI) gauge displays the current level of particulates that are 2.5 microns or larger, while a circular indicator glows green depending on the cleanliness of the air: green for clean, yellow for questionable, red for poor.

Buttons along the top of the unit let you turn the system on and off, set it to Auto mode, and adjust the four fan settings: Min, Mid, Max and Turbo. There’s also a way to turn the screen off using Sleep mode. On the downside, the Wyze Air Purifer lacks the adjustable nightlight that the Clorox air filter has.

How difficult is setup for the Wyze Air Purifier?

Getting started was easy, for the most part. After opening the box, I removed the plastic wrap around the HEPA filter, put the filter back into the air purifier, and then plugged the unit in.

Next, I opened the Wyze app (those new to Wyze devices will need to register for an account) and tapped the “+” button. The app searched for and found the air purifier, which I connected to Wi-Fi (2.4GHz only) by pressing the Auto and Fan buttons together. Back in the Wyze app, I picked my Wi-Fi LAN and entered the password.

After all was said and done, the Wyze Air Purifier was set up and cleaning my office air in less than 5 minutes. But while the initial setup process went smoothly, the air filter required a frustrating three tries and another half hour to complete the required firmware update.

Does the Wyze Air Purifier work with the Wyze app?

A jack of all trades, the Wyze app is one of the most versatile in the business and also works with the company’s door locks, vacuums, light bulbs, and other gear.

In addition to reporting that the local pollen count was high and advising me to stay home, the app can remotely control the Air Purifier. I was able to set the timer, sleep schedule, and the fan’s four levels. My one complaint is that the app didn’t make changes on the fly in response to my choices. Instead, I had to tap Save; a few seconds later, the fan beeped and made the changes.

The app also has a nifty trick up its sleeve: Insights, which tracks dust and pollen both in the room and outside and displays its findings in an easy-to-read graph.

When in use, the Wyze Air Purifier can be a bit on the loud side. The unit delivered a stiff breeze of 7.6 miles per hour and hit a maximum noise level in Turbo mode of 59.6dBA (measuring 36 inches above the outlet vent). That’s about normal conversation level, and I was able to talk to people and use the phone nearby. By contrast, my Dyson circular tabletop fan (which doesn’t have a filter) recorded 51.8dBA and 7.1 mph in the same room. Using its Min setting, the Air Purifier produced only 38.0dBA of noise.

After trying several ways to use it, I ended up setting the Air Purifer to Auto mode so that it monitored the air and cleaned it when needed. This proved surprisingly useful when I used the fireplace in an adjacent room and the Air Purifier automatically raised its flow rate, presumably in response to the extra particulates in the air. It now runs 24/7 in my office, and I don’t know how I lived (and breathed) without it.

Is the Wyze Air Purifier worth the cash?

At $170, including the HEPA filter, the Wyze Air Purifier costs nearly twice as much as the $100 Clorox Tabletop, but its greater air flow and laser monitoring means that the unit can cover more territory.

On the flip side, the Wyze’s upfront costs are a bargain compared to the pricey NuWave OxyPure filter’s $600 price tag–which, to be fair, includes three replacement filters.