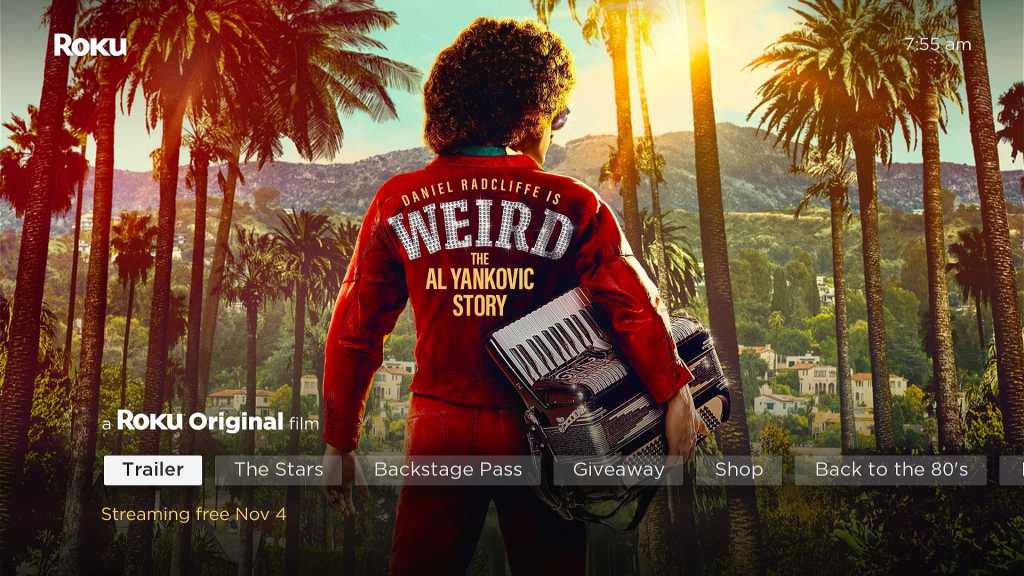 On Friday, Roku will debut Weird: The Al Yankovic Story, its splashiest original film yet. The openly exaggerated biopic will stream exclusively on the Roku Channel, and you can tell it’s a big deal for Roku, which has even added a new home screen section on its streaming players and smart TVs to promote the film.

But like everything else on Roku’s streaming service, the free content comes at a cost: The Roku Channel is ad-supported, with no option for ad-free viewing. If you want to watch Daniel Radcliffe’s interpretation of Weird Al, you’ll have to sit through commercials.

There is, however, a workaround: By using a little-known service called PlayOn, you can record any movie or show from The Roku Channel, then use that recording to skip through the ads.

This little trick is worth keeping in mind whether you’re interested in a Weird Al biopic or not. As more companies introduce ad-supported options as an excuse to raise prices on their ad-free tiers, rolling your own recordings might help defray the costs.

PlayOn is a service that can record video from on-demand streaming services such as Netflix, Hulu, Disney+, and of course the Roku Channel. Once it creates a recording, the resulting video file is yours to keep, and you can skip through any ads that are embedded within. (In my experience, the recordings also tend to strip out the ads to begin with.)

PlayOn offers two versions of its service, each with different hardware requirements and costs:

Once you’ve made a recording, you can watch it through PlayOn’s mobile apps, or you can cast the video to Fire TV, Chromecast, Android TV, Roku, or Apple TV devices. If you’re a bit more tech-savvy, you can also use media server software such as Plex or Channels DVR to stream PlayOn’s video files.

If you’re wondering whether this is legal, the answer is “probably.” PlayOn’s recording capabilities have been around for nearly a decade, and the company says it’s never been sued. It argues that the service functions the same as a traditional DVR for personal recordings, and the start of its videos include the user’s name and IP address to discourage illegal distribution.

Still, PlayOn has its downsides: Because it’s capturing the actual video, recordings aren’t available until they’ve played in their entirety. The Home version is also notoriously finnicky and doesn’t support 1080p video, and neither version allows for 4K or HDR.

Because of those issues and the ongoing costs involved, PlayOn isn’t for everyone, but it’s the perfect fit for a film like Weird: The Al Yankovic Story. In lieu of a commercial-free option from Roku, this is the next-best thing.

For most users, PlayOn Cloud will be the easiest solution for skipping ads, as it doesn’t require any additional hardware or ongoing subscription costs. And if you’re new to PlayOn, you can set up a free trial to record the Weird Al movie at no charge.

Now, here’s how to use PlayOn’s app to record the movie and watch it without ads:

What else is PlayOn for?

Now that you have a sense of how PlayOn works, you might come up with other ways to use it.

Its commercial-skipping capabilities, for instance, may be useful for other services that charge extra for ad-free viewing, such as Peacock Premium, Disney+, and (as of this week) Netflix. The math admittedly gets a bit tricky here, since PlayOn’s own costs can offset the savings of these services’ ad-supported tiers, but it is possible to come out ahead.

You can also use PlayOn to maintain access to movies or shows you’ve recorded, even after your streaming subscription has lapsed or the content has moved to another service. And if you’re running a media server, those recordings can help centralize more of your TV viewing into a single app.

I’ve long said that the easier cord-cutting is, the less money it saves. As streaming services come up with new ways to charge you more money or make you sit through more commercials, creative workarounds like PlayOn are worth keeping in mind, even if they involve small costs of their own–and a little extra effort.

Sign up for my Cord Cutter Weekly newsletter for more ways to stay a step ahead of the cable and streaming companies.