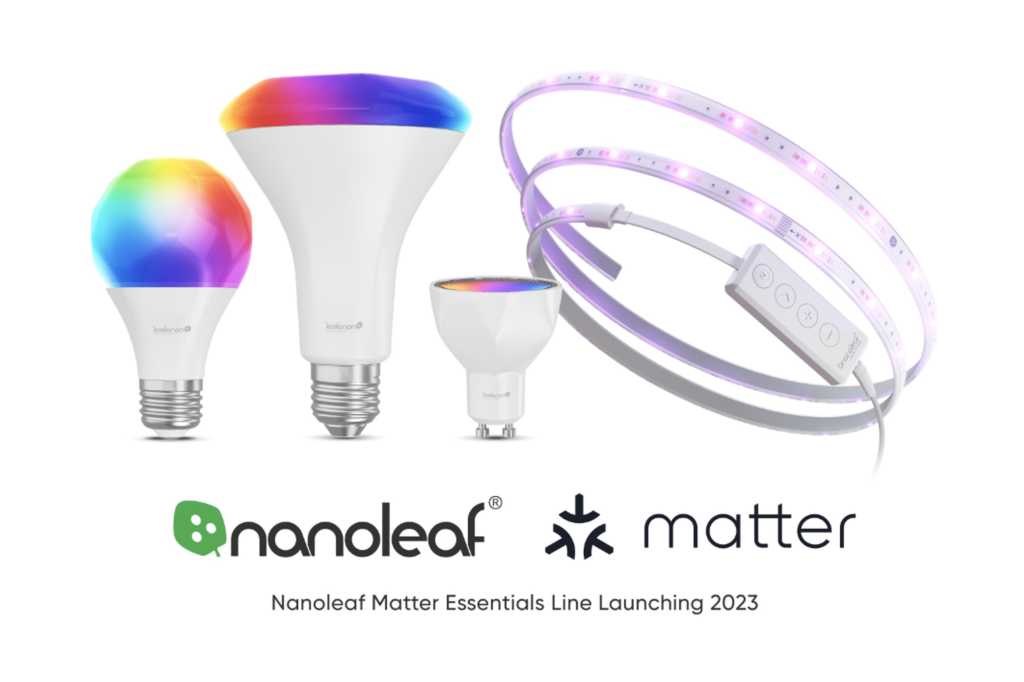 Nanoleaf has unveiled four upcoming lights that will support the nascent Matter standard, including a color A19 bulb and a light strip.

Part of Nanoleaf’s Essentials line, the new bulbs will arrive in “early” 2023, according to Nanoleaf.

In the meantime, it remains unclear whether Nanoleaf’s existing lights, including its popular Shapes and Elements light panels, will ever get Matter updates, although Nanoleaf promises that its current products will continue to work as usual.

The new Matter-enabled Essentials lights will include a standard A19 bulb, a GU10 downlight, a BR30 floodlight, and a lightstrip.

All the upcoming Essentials lights will be able to glow in shades from a palette with up to 16 million colors, and they’ll also support tunable-white temperatures ranging from a warm 2,700 to a cool 6,500 Kelvin.

And because they’re compatible with Matter’s “multi-admin” capabilities, Nanoleaf’s new Essentials bulbs can be configured and controlled by your choice of smart home app, including Amazon’s Alexa app, Apple Home, Google Home, and Samsung’s SmartThings.

Nanoleaf didn’t provide exact pricing details for the upcoming Essentials bulbs, except to say that they’ll range between $20 and $100.

While Nanoleaf is moving ahead with Matter for its new lighting products, its current slate of smart lights won’t be getting Matter updates, or at least not yet.

Nanoleaf had previously announced that the chips in its existing Thread-enabled Essentials lights aren’t powerful enough to support Matter.

And while the Thread border routers embedded in the controllers of Shapes, Elements, and Lines lights could be updated to work with Matter, Nanoleaf said earlier this year that it’s “too early to know” whether “that upgrade will bring you lots more value than you already have today,” and that work on Matter updates would “divert development time and resources away from other improvements and innovations.”

Asked more recently about Matter updates, a spokesperson told TechHive that Nanoleaf “isn’t quite ready” to announce its plans.

Officially ratified in October and backed by such tech titans as Amazon, Apple, Google, and Samsung, the Matter standard promises to make it easier for a wide range of smart devices to work together across different smart home ecosystems.

Initially, Matter will support smart lights, thermostats, window shades, security sensors, door locks, TVs, and smart hubs, while other categories are expected to be added in future versions of the standard.