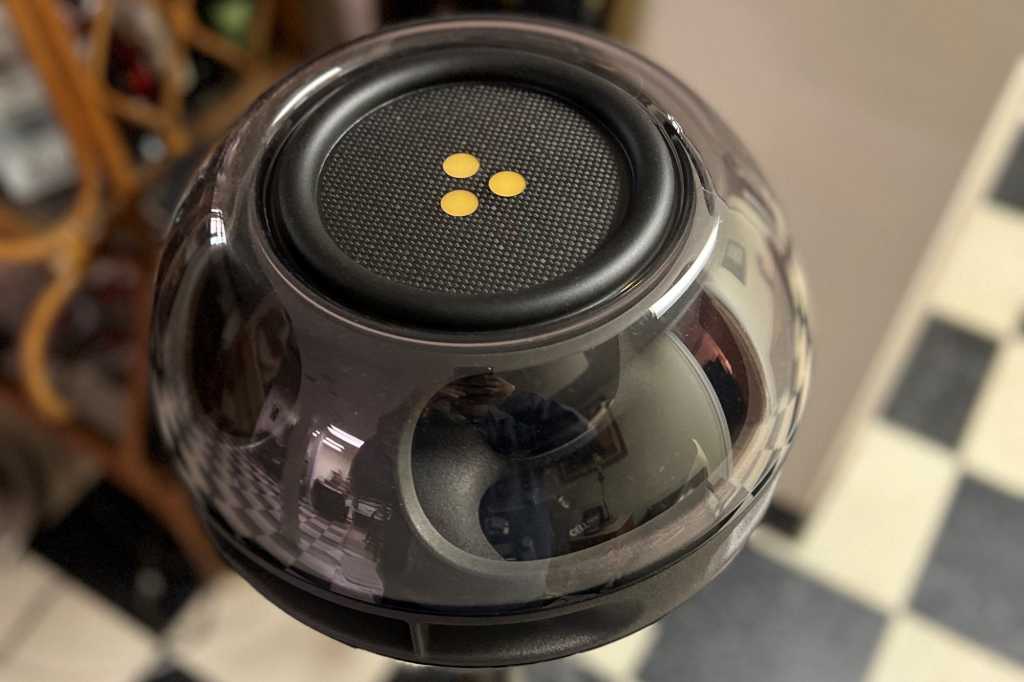 These ultra-premium wireless speakers leave the competition in the dust, but that quality comes at a very high price.

Anyone who grew up in the 1970s got very specific messages from movies and television about the promise of our technological future. The designers at Syng have delivered a hi-fi speaker—the Cell Alpha—that delivers those retro future dreams in spectacular fashion.

The Syng Cell Alpha is the speaker you’d imagine James Caan would use in his high-rise apartment in the 1975 movie Rollerball. Or maybe it’s something that would catch grubby detective Charlton Heston’s eye when he visits Joseph Cotton’s luxury digs in 1972’s Soylent Green. It’s the vision from our imagined sci-fi future.

The arc of industrial design didn’t take that exact path, but that didn’t stop Syng from embracing the aesthetic and launching an audio company that makes a single product: a speaker that both fulfills that retro promise and would look great in any mid-century modern design setting.

Syng was founded by Christopher Stringer, a former Apple industrial designer who worked closely with Jony Ive and was the lead designer on the original iPhone. Stringer’s cofounder is Damon Way, who started the legendary skateboarding footwear company DC Shoes. Those are two guys who know about creating consumer goods that inspire fierce, almost religious devotion, and the Cell Alpha are speakers that will create that kind of joy in listeners who accept them for what they’re designed to do.

Assembling and setting up the Syng Cell Alpha

Syng has created an elegant and streamlined experience that will seem perfect to the listeners it’s trying to reach. If you’re an audio-head who values flexibility, versatility, and the ability to endlessly tweak your settings, the Cell Alpha is not for you. This is a walled garden with a carefully curated end-to-end experience.

The experience starts with the unboxing. Each speaker comes out of the box wrapped in a protective shiny silver covering to prevent scratching during shipping. Could that covering, doomed for the trashcan, have been a dull matte black and probably cost a bit less? Sure, but the silver evokes a sci-fi vibe that’s in line with the experience Syng wants to deliver.

The power cable disappears as it threads through the stand, and the assembly is easy and satisfying. At this price, you have the right to expect the highest-quality machining for the parts, but it’s always a relief when the threads match up on the first try and the resistance after screwing them together lets you know when you’ve achieved just the right torque.

Setup continues with the Syng app for iOS. Yes, here’s another element of the Syng experience sure to infuriate a chunk of its potential audience. Even though the company says “Android support is coming soon,” the smooth setup experience and the fact that the designer is an Apple alum suggests the entire experience might be tied to iOS in a way that won’t be easy for the company to replicate on another platform.

The Syng Space app is so essential to the experience that the setup instructions that cover assembly stop at the point where you turn on the speakers and tell you to “continue setup in the Syng app” as your iPhone takes over the experience.

You first create an account with your phone number. That’s so Syng can text you a verification code that ties your device to the speaker. Once you’re started, you get an elegant and clear setup experience inside a beautifully designed app.

The initial connection is via Bluetooth, and the speaker makes a beep as it’s added to your account. The next step is connecting to your Wi-Fi network by entering your network password into the Syng Space app. You then name the space where your Cell Alpha will live. Next comes the important part: Activate Syng’s Soundcheck process and your speaker will play sounds to read the room. You then move an image of the speaker on the app screen to match its position in your room.

Once you’ve positioned your speaker in the app, you’re ready to go. An array of bubbles appears on the screen below the circle that represents speaker placement. As of now, Spotify Connect and AirPlay 2 are the only two services that appear in the app. You activate a connection to the speaker by dragging the preferred audio source into the room’s circle.

One speaker sounds great, but two speakers sound amazing. If you’ve bought a pair of Syng Cell Alpha speakers, the next step is to use the app to add the second speaker to your array. Go to the Settings menu and choose Set Up More Cells and repeat the pairing process. You won’t need to re-enter the Wi-Fi password because it’s already registered with your account.

Add the second Cell Alpha to the same space as your other speaker and repeat the Soundcheck process. Position the images of two speakers in the app to match their placement in the room. The final step is Set Orientation, which allows you to flip the positions of the speakers if the Syng Space app has confused the left and right during the setup.

Here’s where things get really interesting: You can change the direction of the music by moving the AirPlay 2 or Spotify bubble. Wherever you are in the room in relation to the speakers; you can focus the music to your exact location.

How are the Syng Cell Alpha speakers built?

Syng touts its “triphonic sound,” which refers to each Cell Alpha’s three horns. Each horn consists of two dynamic drivers covering the mid- and high-frequency ranges. There are also two six-inch, force-cancelling subwoofers, one at the top of the speaker firing up, and the second at the bottom of the speaker firing down.

Each Cell Alpha speaker is 12 inches tall and 11.8 inches in diameter and weighs a substantial 12.8 pounds. The space above and below the horns and surrounding the subwoofers is made of a clear plastic material that allows you to see a lot of the internal electronics, contributing to the futuristic design.

Each speaker uses three microphones to read your room as it calibrates a custom sound for your personal space. If you’re concerned about privacy, Syng says that’s the only time those mics are turned on. A ring on the support pole rotates to control volume. Pulling down on the ring plays or pauses the music.

Cell Alpha speakers can be mounted three ways: We tested them with the $349 floor stands, but there’s also a $199 tabletop stand and a new $349 ceiling mount, which would make any room look like it has the most stylish security cameras ever. Stands are included in the prices shown above.

Listening to the Syng Cell Alpha

The Syng Cell Alpha is tuned to the tastes of its makers. That means booming bass that really delivers at high volume. They’re perfect party speakers if your tastes run to electronic dance music or hip hop. That doesn’t mean, however, that they’re no good for classical, jazz, folk, or softer rock tunes at medium-to-low volume.

There’s obviously a lot of digital signal processing going on here to create an immersive listening experience. You’re putting yourself into the designers’ hands and, aside from the ability to alter the direction of the sound in the app, they’re offering zero ways for you to change the processing results.

My favorite listening experience while using these speakers was playng Brian Eno’s 2022 album FOREVERANDEVERNOMORE, the artist and producer’s return to the song-based format that defined his first 1970s solo LPs after leaving Roxy Music.

Fans of Eno’s production work with David Bowie, U2, and Talking Heads know that Eno is an artist obsessed with soundscapes and how the placement of instruments in the mix impacts the emotional content of the music. On a song like “We Let It In,” the stereo stream from Qobuz features substantial movement of the synthesizers and backing vocals in the mix. The three horns on each Syng Cell Alpha create a distinct placement for each instrument in the sound field.

While the app’s ability to move the center point of the mix is primarily designed to allow users to get the same audio experience from different positions in the room, staying in one place and moving the mix around is a blast, offering different perspectives on the sound and generating a “remix” effect. While this isn’t probably how you’ll want to enjoy music on a regular basis, it can be a fun way to get a different perspective on music you already love.

Other ways to use Syng Cell Alpha speakers

There are two USB-C inputs, one on the stand and one on the bottom of the Cell Alpha speaker. Either can be used to connect to a computer for lossless audio or maybe a turntable if you have the right adapters.

Once you’re running 10-ft. cables from the Cell Alpha to a laptop across the room, you’re sacrificing a lot of the experience that makes these speakers so special. Did a lossless signal direct from the computer sound better than the same track streamed wirelessly via AirPlay 2. Because of the extensive DSP that drives this speaker experience, it’s impossible to say that lossless makes a noticeable difference. These speakers sound great when used as designed. If you’re looking for them to do more traditional audiophile-type things, you might want to look at more traditional audiophile gear.

You can use Syng Cell Alpha speakers in a home theater setup if you buy a $79 Syng Link cable that allows you to connect an HDMI source to the Syng’s USB C port. That connection supports both stereo and Dolby AC-3 5.1 surround sound, but not Dolby Atmos or DTS:X–at least not yet. The Cell Alpha speakers will automatically switch into surround-sound mode when the source is playing a compatible format.

Inveterate minimalists might choose a pair of Syng Cell Alpha speakers for their home theater setup just to preserve the look of the room, but until the speakers support the current generation of surround formats, home theater enthusiasts will be better served by conventional loudspeakers and an A/V receiver—or even a soundbar—than the Cell Alpha.

Are Syng Cell Alpha speakers worth the cost?

Syng Cell Alpha speakers are truly beautiful and they sound fantastic. They’re extremely well-made and relatively future-proof since they’re designed to do only one thing and that thing works with your home Wi-Fi network. Those who can afford them won’t be wasting their money—provided they’re OK with their unconventional industrial design and their limitations.

The philosophy behind the Syng Cell Alpha is either its biggest selling point or a complete deal breaker. The designers and audio engineers who built this speaker created a lush sonic experience based on their ideas about how music sounds best.

The setup process is a dream. The day-to-day playback experience is smooth and soothing—just crank them up, sit back and enjoy the music. The Syng Cell Alpha is a near-perfect experience for the well-to-do plug-and-play set. If you have a compelling need to tweak your audio system, Syng didn’t design these speakers for you and you’ll want to stay away no matter how cool they look.