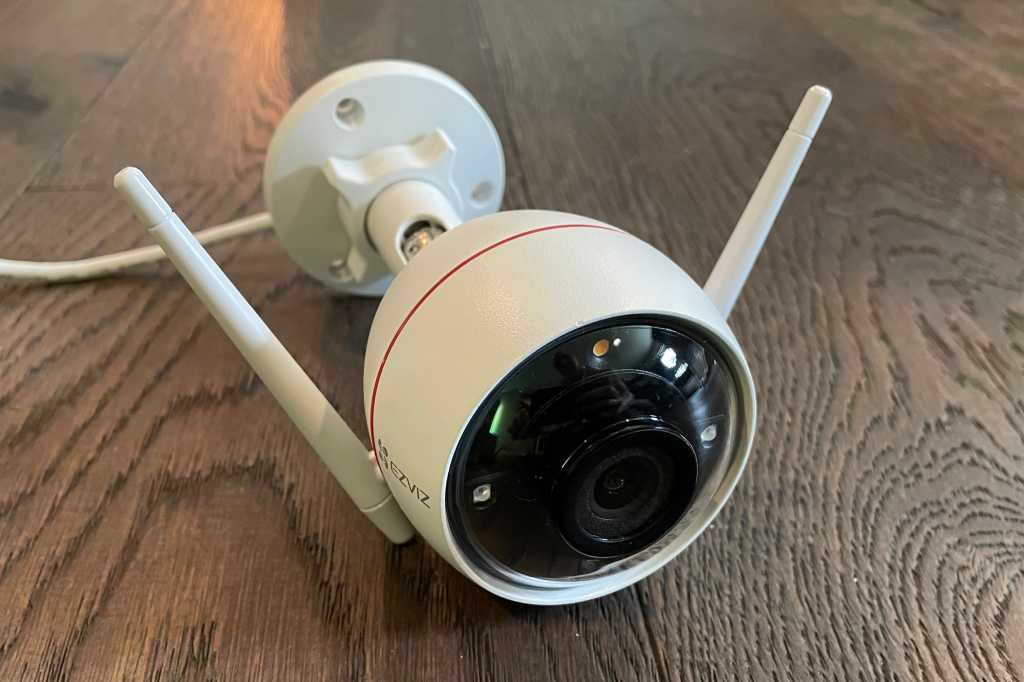 EZVIZ continues its parade of inexpensive smart cameras with the C3W Pro, an affordable, compact cam with all the trimmings. The Pro is an “upgraded” indoor/outdoor camera with just about every feature you could want: IP67 weatherproofing, optional floodlights for “color night vision” in addition to standard infrared, support for both onboard recording (no microSD card included, however) and cloud storage, and smart person detection. There’s also built-in two-way talk and a basic siren if you’d like to use the camera as a rudimentary security system. If specs are all that concern you, the C3W Pro looks outstanding on paper.

But before we get too far ahead of ourselves, let’s temper the love-fest with some reality. The C3W Pro’s design isn’t my favorite, a semi-bullet design that is attached to a mounting base via a swiveling post. You can’t readily use the camera on a bookshelf, but it can work either on a wall or a ceiling. The worst part of the design, however, is the pair of stubby, flimsy antennas that jut out from either side of the face. These don’t stay in place well when you position them, and overall, they simply date the design.

The camera connects either via Wi-Fi (2.4GHz only) or an ethernet, which splits off from the power cable. (There’s no battery support here; the camera must be permanently hardwired.) The camera offers a basic verbal walkthrough via the camera’s speaker, but following the EZVIZ app to get things up and running isn’t difficult, it’s a process largely built around scanning a QR code on the base of the unit and then making a few simple selections.

Image quality is solid, daytime or night. The maximum resolution of 1920 x 1080 pixels (at 30 frames per second) will be ample for most users, and the 104 degree (diagonal) field of view doesn’t overly distort images, while still providing an appropriately wide view of what’s in front of the camera. Both the infrared and color night vision modes look solid, as the two spotlights on the C3W Pro are more powerful than I expected. You’ll also see a pricier 2K version of the C3W Pro camera when you shop that offers maximum resolution of 2560 × 1440 pixels; it sells for $129.99

Motion sensing works well—perhaps too well, as even on relatively low sensitivity settings, I was still picking up flying gnats and plants swaying gently in the wind. It will likely take users a significant amount of fine-tuning to avoid having the app filled with hundreds of clips of nothing. I found the person-detection feature to work quite well, however, outlining interlopers with a red rectangle and, when set, sounding the klaxon on the unit and on my phone (along with push notifications, when I had them turned on). Clips vary greatly in length and have no apparent cooldown requirement. Some were just a few seconds long, while some stretched past three or more minutes. There aren’t any settings to alter this behavior.

If there’s any kind of real problem with the camera, it’s the app, which remains confusing, difficult to navigate, and overloaded with poorly translated text. Motion sensitivity settings, for example, are buried under “alarm notification,” and it’s difficult to download video clips. EZVIZ first puts saved clips in its internal “My Album” section, and only from there you can export the videos to your phone’s photo reel. As well, the app remains a bit buggy. When switching between screens of clips, the app has a tendency to make them all seemingly vanish. Only after a force-quit and restart will they repopulate on the screen. Support for Alexa and Google Assistant video devices is also included.

While you can record clips locally, the EZVIZ Cloudplay system is fast and reasonably affordable. Single-camera pricing includes seven days of clip storage for $6 per month or $60 per year, or you can get 30 days of storage for $11 per month/$110 per year. A three-day plan for $40/year is also available. With multiple cameras (up to four), the rates for seven days of clip storage are $9 per month/$90 per year or 30 days of storage for $16 per month/$160 per year. A seven-day trial is included with the device. The best feature of the camera is perhaps its price. At just $90, you’re getting a ton of features (everything but pan/tilt/zoom, really) that should meet the needs of almost any home user. If the aesthetics don’t concern you—and perhaps that’s not a deal-breaker for an outdoor camera, it’s definitely worth strong consideration.