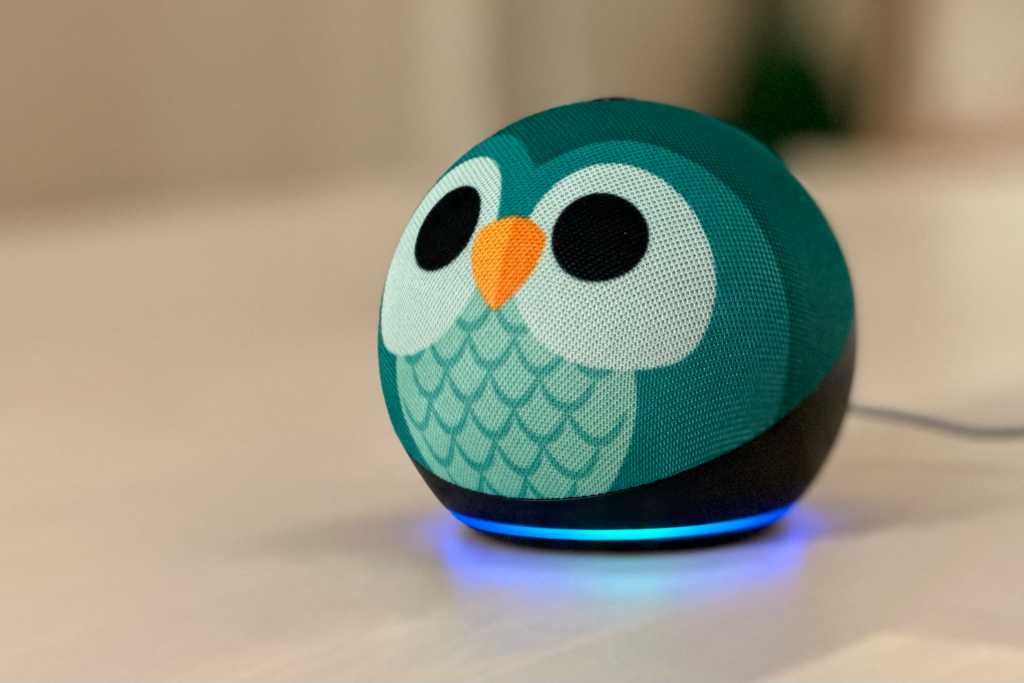 The Echo Dot Kids gives you a year’s worth of access to the massive Amazon Kids+ library for a fraction of the cost, while offering the same hardware and features as the superlative Echo Dot.

Is there anything funnier than making Alexa say “poop”? Not if you’re a kid, there isn’t. Indeed, my daughter and her pals used to (she’s older now, thank goodness) delight in making Alexa spell “poop,” say “poop,” tee up songs with the word “poop” in them, you name it.

If you’re looking to rein in your child’s Alexa usage or at least distract her from the toilet humor, Amazon’s fifth-generation Echo Dot Kids might be just the ticket. Available for a modest $10 premium over the standard $50 Echo Dot, the Echo Dot Kids comes with the same hardware and features as the regular Dot, including a new temperature sensor and even Wi-Fi extender capabilities for Eero mesh routers.

While the hardware is essentially identical, the Echo Dot Kids comes in your choice of two kid-friendly designs on its fabric covering, as well as an extended warranty period. Best of all, you get a full year’s worth of Amazon Kids+, a subscription service that serves up a massive amount of age-appropriate content. You also get parental controls, although they’re not exclusive to the Echo Dot Kids.

The wealth of Alexa skills, music playlists, audiobooks, and other content available through Amazon Kids+ is of decidedly varying quality, and fickle as they are, some kids will quickly tire of the Kids+ content and revert to the “poop” game.

That said, the Echo Dot Kids lets you try Amazon Kids+ for a full year for an 80 percent discount, not to mention the greatly expanded warranty period. And even if your children eventually do move on from Kids+ (and yes, they will), you’ll still have a full-on Echo Dot at your disposal.

This review is part of TechHive’s in-depth coverage of the best smart speakers.

Does the Echo Show Kids have the same hardware as the regular Echo Dot?

Placed side-by-side, the fifth-generation Echo Dot Kids looks almost precisely the same as the previous version. Both are spherical and fabric-covered, both measure 3.9 x 3.9 x 3.5 inches (WxDxH), and both have the same configuration of tactile “action,” volume up, volume down, and mic-off buttons at the top, while the telltale Alexa ring wraps around the base of the speaker.

There are some physical differences between the fifth- and fourth-gen Echo Dot Kids, however, the most obvious being the kid-friendly decorations printed on the fabric. While the last-gen Echo Dot Kids came in “Panda” and “Tiger” designs, the new version comes in “Owl” and “Dragon” flavors (Amazon sent the owl design for review).

There’s also a slight difference in weight, with the 10.7-ounce fifth-generation Echo Dot Kids being a tad lighter than its 12-ounce predecessor. That tiny difference in heft doesn’t mean anything in a practical sense, but there it is.

A more substantial change concerns the removal of the 3.5mm audio output jack, a subtraction that also occurred on the new, fifth-generation Echo Dot and Echo Dot with Clock (which perhaps explains the weight differential). That means you’ll no longer be able to use a wired connection to pipe the Echo Dot’s audio through an external speaker.

Under the hood, the Echo Dot Kids has a single 1.73-inch driver, slightly larger than the 1.6-inch driver in the previous generation, while a new temperature sensor can be used to trigger Alexa routines (such as one that might turn on a smart plug-connected fan when the room reaches a certain temperature). And if you’re the owner of an Eero mesh Wi-Fi router or a Ring Alarm Pro, the Echo Dot Kids can act as an Eero extender, adding up to 1,000 square feet of Wi-Fi coverage. That’s a sweet bonus.

You can read more about the functionality and performance of the larger audio driver, the new temperature sensor, and the Eero extender features in our review of the fifth-gen Echo Dot with Clock. Short version: You’ll be happy with all the new features, and at its core, the Echo Dot is a superb smart speaker.

While the new Echo Dot Kids isn’t any tougher from a physical standpoint than the standard Echo Dot, it does come with a two-year warranty, versus just 90 days for the non-kid Dot.

How do you set up the Echo Dot Kids?

Getting the fifth-gen Echo Dot Kids up and running is almost as easy as it is with any other Echo device, although parents who want to set up the speaker for their kids will have to jump through some extra hoops.

The most laborious part of the Echo Dot Kids setup will be for those who don’t already have Amazon accounts; in that case, you’ll need to create an account (which you can do on the web or the Alexa app) and sign in before getting started.

Once you’ve created an Amazon account–or if you already have one–all you need to do is plug in the Echo Dot Kids (the power cord has a chunky wall wart, unfortunately) and fire up the Alexa app.

The app should detect the Echo Dot Kids automatically and prompt you to begin the setup process (or at least, it did for me); if not, you can begin pairing manually by tapping the “+” button on the Devices screen. Within about a minute or so, the Alexa app added the Echo Dot Kids to my home Wi-Fi network, no password required.

At this point, Echo Dot Kids owners will have to go through a few extra steps, beginning with claiming your one-year subscription to Amazon Kids+. You’ll then be asked to select an existing child profile or add a new one (up to four); a kid’s profile consists of their first name, birthday, and a cartoonish avatar.

Finally, you’ll need to grant Alexa permission to collect personal information–namely voice recordings–of your tykes. If you’re not cool with Alexa listening to and storing voice commands from your children, you shouldn’t buy the Echo Dot Kids.

What is included in Amazon Kids+?

As I mentioned earlier, the physical Echo Dot Kids hardware is–aside from the child-friendly designs on the fabric covering–identical to that of the standard Echo Dot.

The main feature you’re getting for the extra $10 is a year’s worth of Amazon Kids+ (formerly Amazon FreeTime), a paid subscription service packed with kid-friendly content. Once that year is up, Amazon Kids+ costs $4.99 a month for Prime members, or $7.99 if you’re not signed up for Prime. An annual Kids+ plan costs $48 a year, or $79 for non-Prime users. While the Echo Dot Kids is an ideal fit with Amazon Kids+, the Kids+ service will work on practically any Echo device.

So, what do you get with Kids+? Basically, it’s a ton of kid-oriented content, including audiobooks from Audible (with titles like House of Teeth, Peter Pan: An Audible Original Drama, The Golden Orchard, The Flying Flamingo Sisters, and Where Shall We Go?); ad-free playlists and radio stations from Disney, iHeart, and Nickelodeon; podcasts (brain on!, Ear Snacks, The Past & The Curious, What If World), and Alexa skills (Amazon Storytime, Discover the Elements, National Geographic Kids Almanac, Star Wars: Sound Journeys, Marvel Hero Training).

Amazon says that its Kids+ content is aimed at little ones aged 3-12. Of course, whether your kids are actually entertained by Kids+ will depend on the particular child. My 10-year-old daughter, who was mildly interested in Alexa’s Kids+ skills when she was a few years younger, informed me she had no desire to go back for the purposes of this review (she now has a fully unlocked Echo Dot with Clock, being the big kid that she is).

As far as the quality of Kids+ content, it’s all over the map. Some content, like the Disney music stations, are a known quantity, while the more polished Kids+ Alexa skills can be reasonably diverting. Some of the more obscure skills and games we tried, however, were of wildly varying quality, although everything was suitable for children.

Does the Echo Show Kids have parental controls?

Amazon Kids+ also offers access to the Amazon Parent Dashboard, where you can manage the parental controls for up to four kids profiles. With these controls, you can set screen time limits, put specific Echo devices on pause (perfect for when you’re done with the “Alexa, say poop!” thing), turn on an explicit language filter for music, and monitor usage habits. It’s worth noting, however, that you don’t need a paid Amazon Kids+ subscription to use the Parent Dashboard.

It’s also worth noting that a big chunk of Amazon Kids+ content–think streaming TV shows and movies, as well as app-based games–requires a screen, which means you’ll need a Fire Tablet or an Echo Show. In other words, if you’re only using the display-less Echo Dot Kids with Amazon Kids+, you’re missing out on some of the best Kids+ content.

If, after a year, you and/or your kids decide that Amazon Kids+ isn’t for you, you can simply cancel your subscription. The Echo Dot Kids will continue to function like any other Echo speaker would, and you’ll still have access to free Amazon Kids (no “+”) features; namely, the Parent Dashboard and its parental controls.

Is the Echo Show Kids worth the cash?

On its own, Amazon’s Echo Show Kids won’t deliver everything on offer through Amazon’s Kids+, and what you do get is a decidedly mixed bag of content that may or may not appeal to your ever-capricious children.

Still, the Echo Show Kids’s $10 premium over the standard Echo Show does give a full year’s worth of Amazon Kids+–a $50 value–plus the extended warranty period. And even if you end up cancelling Kids+, the actual Echo Dot Kids hardware is excellent, complete with Alexa at your beck and call, not to mention Eero extender capabilities if you happen to own an Eero router.