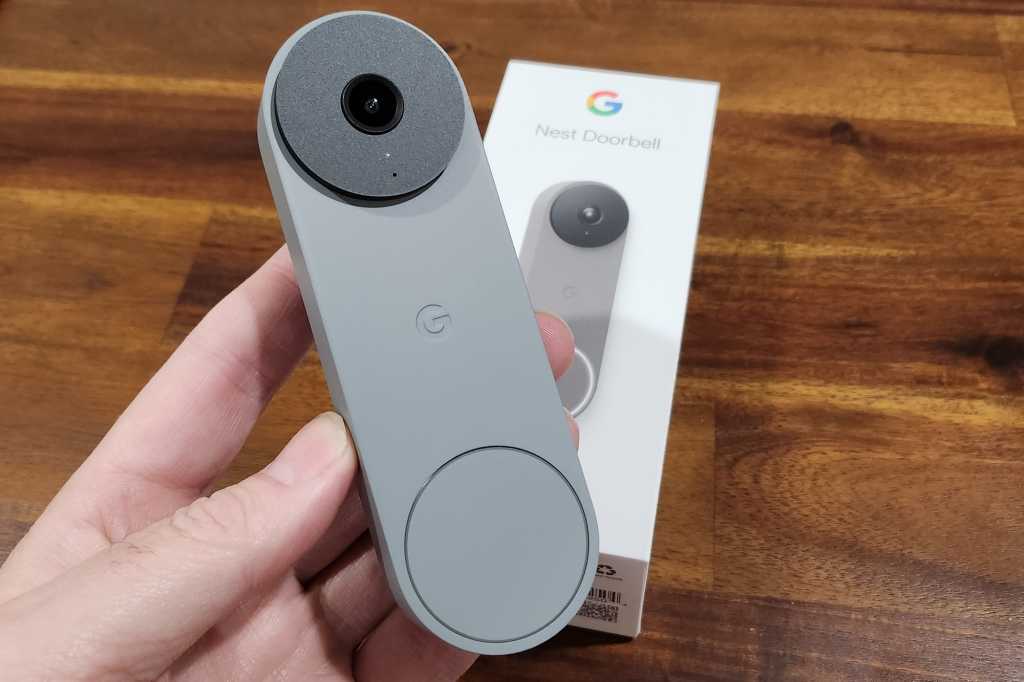 Four years on from the Nest Hello video doorbell first going on sale, Google has finally updated that excellent porch sentinel with a new design and new intelligent recognition features. The all-new Nest Video Doorbell (Wired) is a well-designed, polished product that performed great in our review.

The most obvious design difference between this second-generation model and the Nest Hello is that the earlier model’s shiny face plate has been replaced with a matte finish that matches the equally great Nest Doorbell (Battery) that went on sale earlier in 2022. That model can run on battery power or be hardwired, with the battery providing back-up power in the event of an outage. Why opt for a wired Nest doorbell or a battery-powered model? If you have the wiring in place–and a standard North American 16-24 volt AC doorbell power supply—you gain the option of 24/7 recording (more on that in a bit).

This review is part of TechHive’s in-depth coverage of the best video doorbells.

One of the most notable updates is the new doorbell’s processing power. Where the first-generation model transferred video to the cloud for processing, both these new models handle intelligent alerts on the doorbells themselves. The intelligent alerts attempt to categorize the type of activity being detected. So, instead of getting alerts every time motion is detected, the doorbell analyzes what it’s seeing and categorizes the activity. Users can choose to get alerts when it detects people, packages being delivered, vehicles, and/or animals.

If you choose to allow it, the doorbell will also attempt to recognize frequent visitors and, once you give them their names, will be able to alert you to their specific presence. Better yet, because that capability is on the device, you don’t need a Nest Aware subscription to make use of them. This is a very welcome feature.

Also new is the doorbell’s ability to store up to an hour of video local, on the device. This can be useful during power outages: You won’t get alerts during the outage because presumably your Wi-Fi will be out; but when it comes back on, the doorbell will have saved any motion it detected during the outage so you can review it.

While this onboard processing without a subscription is a neat feature, you’ll still want to consider carefully whether the Nest Doorbell (Wired) will meet your needs should you plan to operate it without that monthly fee. Without a Nest Aware subscription, you can only capture and store video of events from the past three hours. If someone comes to your door at 10 a.m. and you check the recordings at midday, that’s not a problem. But if something happens in front of your house at 3 a.m. and you wake at 7 a.m., the video will already have been deleted.

There are also under-the-hood differences between this model and the older Nest Hello: The original model was outfitted with a 3-megapixel image sensor, but the new model has a 1.3-megapixel sensor. That translates to a 960 x 1280 pixel image in portrait orientation, where the older product captured a 1600 x 1200-pixel image in landscape orientation. The specs of the new model are similar to those of the battery doorbell that Nest put on sale earlier this year. The switch from landscape to portrait makes it easier to see the people on your porch from head to toe—and perhaps packages—instead of the space on either side of them.

Both of the new Nest doorbells feature HDR (high dynamic range) video, for better balance between bright and dark areas, and both have a 145-degree field of view. The new doorbell features 10 infrared LEDs for night-vision illumination versus eight on the first model, so the new one should see marginally better at night.

There are a couple of LED indicators on the doorbell’s front panel: A ring around the doorbell button glows when it detects movement, which is very useful for nighttime visitors. A second, smaller LED glows green when video is being recorded or processed, and blinks green when someone is viewing the live feed from the camera.

As with other doorbells, you can set activity zones you want the camera to record, so that motion in areas outside those zones won’t trigger alerts and recordings. This is particularly useful if you have a road in front of your house, other frequent activity off your property, or a tree or shrub in the camera’s field of view.

The Nest Doorbell (Wired) is compatible with Google Assistant, of course, and it can send voice announcements to Google Home-powered smart speakers and smart displays in your home when a visitor rings the doorbell. Subscribed to Nest Aware and save your visitor’s faces and names, and the speaker will announce their presence by name. This new doorbell will also work with Amazon’s Alexa voice assistant (not evaluated during this review), but it’s not compatible with Apple’s HomeKit ecosystem.

Getting the system up and running couldn’t have been easier. I had a head start, because I replaced my first-generation Nest Hello doorbell and I already had the Google Home app installed. Much to my surprise, the mounting plate for the second-generation doorbell, while different, used exactly the same screw spacing. It was a quick swap from one to the other.

If you’ve installed any Google Home products, you know it’s a fairly easy process. The app searches for the device, you send over Wi-Fi access credentials, agree to the terms of use, and you’re up and running.

Should you buy a Nest Doorbell (Wired)?

The Nest Doorbell (Wired) is one of the best video doorbells we’ve tested. Its integration with the Google Home software is seamless, as you might expect. We experienced no software problems or glitches in the test.

Detection was good and the image classification was particularly slick, and I especially appreciated the package-alert feature—even if it did mistake me for a delivery driver as I was bringing home groceries.

If your smart home revolves around Google Home and you have the necessary wiring in place, the Nest Doorbell (Wired) is a no-brainer. If you need a wireless solution, then look to the equally great Nest Doorbell (Battery). But before you pull out your credit card, also factor in the cost of a Nest Aware subscription. While it’s not an absolute requirement, that monthly fee unlocks many of either product’s most useful features. If you already own a Nest Hello, the Nest Doorbell (Wired) is a step up, but probably not enough of one to justify replacement unless you’re hankering for a new toy.