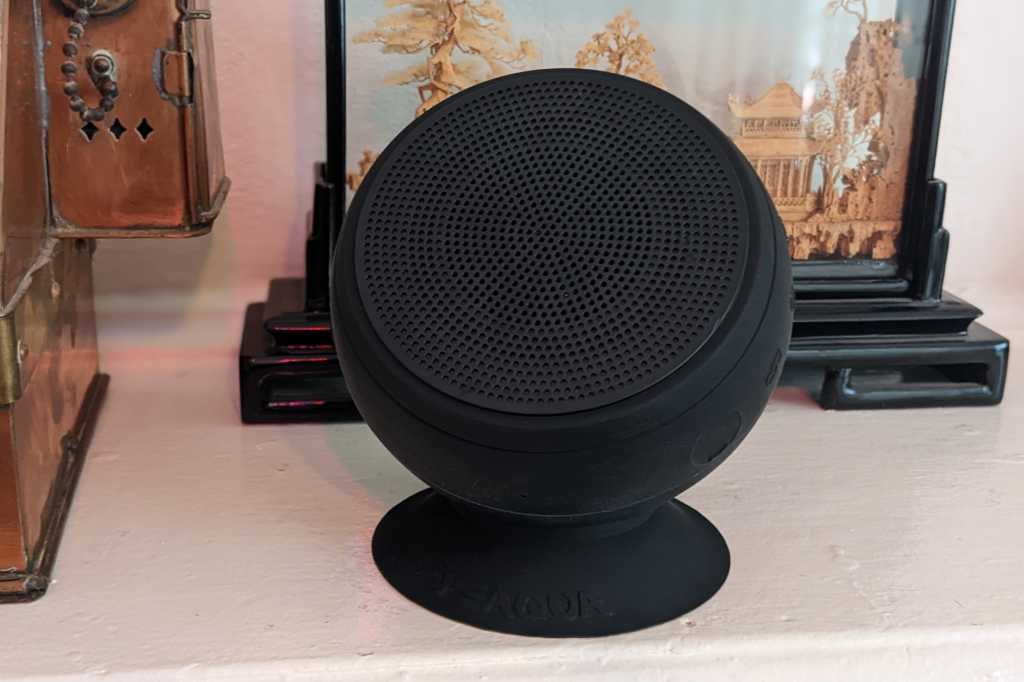 This suction-mounted, round mound of thump is one of the better monophonic Bluetooth speakers we’ve heard. It’s also waterproof, floats, and presents a nicely understated RGB light show.

Having reviewed Speaqua’s smaller Barnacle speakers, I wasn’t quite prepared for the amount of thump generated by this larger $180 Barnacle X (model BX1002). Nor was I prepared for what turned out to be its other above-average sonic characteristics.

Throw in a weatherproof design (it’s rated IP68, and it floats), as well as a tasteful and unusually in-sync RGB light show, and you have one of our favorite monophonic speakers to date. (You can drill down into IP codes and what they mean at the preceding link.)

Our previous Speaqua Barnacle Pro review revealed a clever, nautical-friendly design, with good sound but little to no real bass. The $180 Barnacle X is a larger version of the Pro, and its sound is far, far better–actually featuring some thump. More air inside your enclosure will do that for you.

The Barnacle X measures between 4- and 5-inches in each dimension, with the speaker face flattened for obvious reasons. It sits on a hefty 4.25-inch suction cup. When I say “sit,” you can also attach it to any smooth surface on any plane, such as those that abound on a boat.

If you don’t have a suitable surface, you can screw off the suction cup and use the heavy-duty metal carabiner clip beneath. The spring trap in the clip is large enough to accommodate any lanyard or other attachment point approximately 0.65-inches thick or smaller. There’s also a 1/4-inch threaded cavity for screw-on mounting. Speaqua sells several accessories, including bike and board mounts.

The Barnacle X’s controls are split between the two sides. As shown below, one side features the plus, minus, pause/play, and EQ (switch between two modes–indoor or outdoor) buttons, while the other side sports the power, TWS/input select, and light-show selection buttons.

Also on that side is the captive round rubber plug that seals off the USB-C charging port–the only port of any type on board. There’s no auxiliary audio input, however, and that’s one of this speaker’s few demerits. The Barnacle X’s 8GB of internal memory can hold up to 2,000 tunes. Just attach it to your computer and copy them to the “Barnacle X” drive that should pop up on your desktop.

The Barnacle X I tested was black. Speaqua was delinquent in providing detailed product information on this speaker, but we do know it’s available in at least one other color, “Tidal Blue,” a swirly ocean-themed hue (see below). Choose that color if you can find it, the black is prone to collecting particulate matter and can look a bit grody after a while.

How does the Sqeaqua Barnacle X sound?

Sure, the top-end isn’t quite as sparkly as bookshelf speakers, but it’s not bad. The mid-range is reasonably well-defined, and there’s bass. Not tons of it, but even sub-bass was rendered at times, though it tended to fade more quickly than the actual signal. Apparently it’s a marginal thing.

As mentioned, the Barnacle X has two audio modes: indoor and outdoor. I didn’t have a users guide for my testing, so I don’t actually know which mode is which. But when it flashes pink/purple there’s more bass with a slightly scooped mid-range, and when the RGB flashes blue, there’s less bass with more pronounced mids and highs.

The Barnacle X can also get decently loud thanks to its 20-watt Class D amplifier. Your yacht would have to be large indeed for this speaker to not be heard. Its internal battery will provide tunes for approximately 12 hours. I was at six hours and counting when I turned this article in. I believe the estimate, but subtract an hour or so for the RGB show.

As to said RGB light circle, the Barnacle X seems to have five modes rather than the four I was told about: there’s solid white; transient-matching partial circular patterned multi-color; a flashing grin that changes colors; a fast transient-following multi-color circle lit all the way around; and full-circle color changes following the transients (beats).

The light show seemed to follow the beat more accurately than many I’ve seen, and out-of-sync light shows bug me. The Barnacle X’s didn’t. I also found them more tasteful than the norm, if that can be said of RGB.

As mentioned, Speaqua didn’t return our fact-check sheet in a timely fashion; in my testing, however, the Barnacle X played mp3, wav, flac, and wmv files just fine. That’s broader file support than I was expecting. Of course, using FLAC and wave files will reduce the number of tunes you can store, and those formats won’t really be of as much benefit as they’d be on a good pair of bookshelf speakers.

Overall, I think the Speaqua Barnacle X sounds about as good as anything monophonic and waterproof at its size I’ve tested. Kudos.

The Speaqua Barnacle X is a good value

I quite like the Barnacle X. It sounds good, the shape is fun and starts conversations, and it’s suitable for wet environs. That said, it’s a bit pricey because of the onboard memory, and I wish the rubberized cover didn’t pick up schmutz so readily. Still, if I had a boat, it’s the speaker I’d choose. Slap it on the deck and party down!