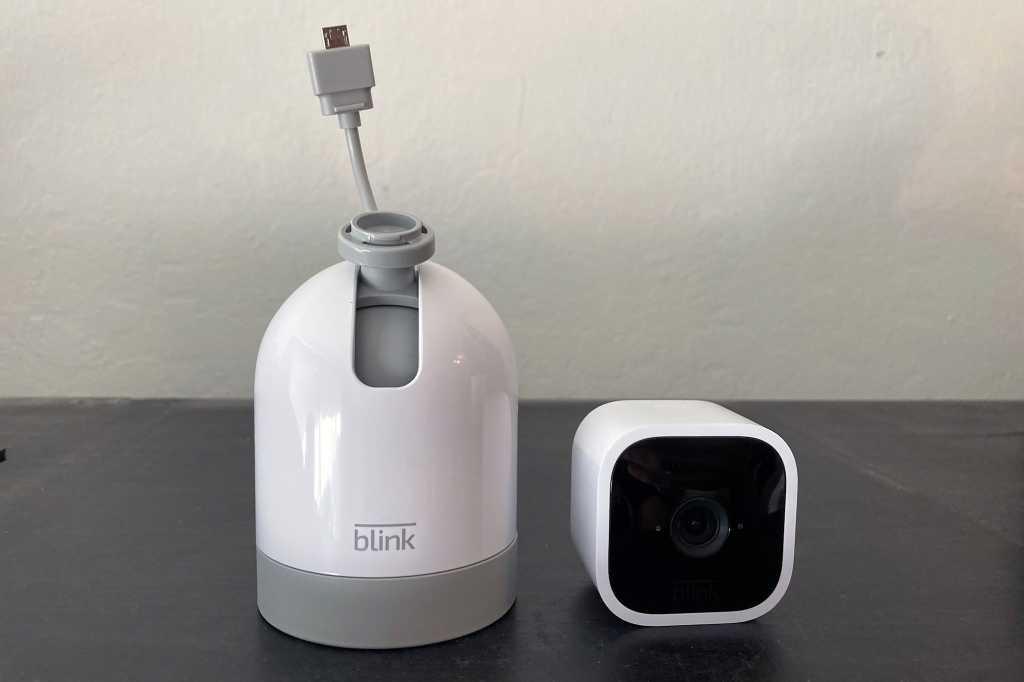 Michael Ansaldo/IDG
At a glance

The Blink Pan-Tilt Mount is worthwhile add-on for the Blink Mini, expanding its capabilities and coverage area.

Amazon’s Blink Mini security camera has a lot going for it, including tack-sharp video quality, motion detection, and a budget-friendly $35 price tag. But one drawback is its fixed viewing angle. Although you can manually reposition the camera by swiveling it on its stand, whatever view you settle on is the one you’re stuck with once you leave your home. That can leave you with blind spots an intruder can leverage for cover.

You could solve this problem by purchasing multiple Minis and placing them throughout a large room, a not unreasonable workaround given the camera’s low price tag. But Amazon has come up with a better solution: The Blink Mini Pan-Tilt Mount. With this accessory, you gain the ability to rotate your Blink Mini left and right and tilt it up and down from the same Blink Home Monitor app you use to control the camera. Current Blink Mini owners can purchase the Pan-Tilt Mount by itself for just $30, while newcomers can get the camera and mount as a bundle for $60.

The motorized mount requires AC power to work, but it doesn’t come with its own power supply. Rather, it uses the one that comes with the Blink Mini. You simply remove the power cable from the back of the camera and plug it into the base of the mount. Then you unsnap the camera from its standard mount and snap it onto the Pan-Tilt. Finally, you take the short USB cable attached to the Pan-Tilt and insert it into the camera’s power port. The camera then cycles through the mount’s full range of motion before settling in its default 180-degree pan position.

To enable remote pan-and-tilt functionality, you need to add the mount as a new device in the Blink Home Monitor app. It’s a similar process to adding the camera, and a series of prompts guide you through the process. Once it’s complete, you’ll see a directional pad added to the Blink Mini’s home screen right below the live-video feed. Tapping one of the arrows on the pad moves the camera incrementally in that direction while long pressing moves it continuously until you release the button or it reaches the limit of its rotation. A home button in the center of the directional pad allows you to return the camera to its default position.

You can perform a couple of additional actions by accessing the “More” menu from the home screen. A 360 Pan feature lets you perform a 360-degree sweep of the room; the mount rotates the camera first all the way right, then left, finally returning to the default position. There’s also a button to update the default view, which simply overwrites the recorded default position with the camera’s current position.

The mount’s motor operates smoothly and is virtually silent. It’s also very quick. It took 4 seconds for it to rotate fully to the left or right from a 180-degree position, and about 6 seconds to go through its 125-degree tilt range. That’s good news as time is critical when you’re trying to surveil an unwanted visitor to your home.

It’s worth noting that there are a few popular features pan-and-tilt cameras support that the Pan-Tilt Mount does not. Although the Blink Mini can detect motion, simply adding the Pan-Tilt Mount will not enable the camera to lock onto people and follow their movements. That would require an update to the Mini’s AI. For similar reasons, adding the mount won’t magically allow you to can’t pan or tilt the camera to a particular viewing point by just tapping or swiping the live image nor can you set waypoints that the camera will reposition itself to automatically. None of those should be expected from a low-priced add-on device either, so if feel you need these features, you’d be better served looking for a more sophisticated, purpose-built pan-and-tilt camera. But for current Blink Mini owners, the Pan-Tilt mount is a great way to expand the functionality of the camera and its range of coverage.