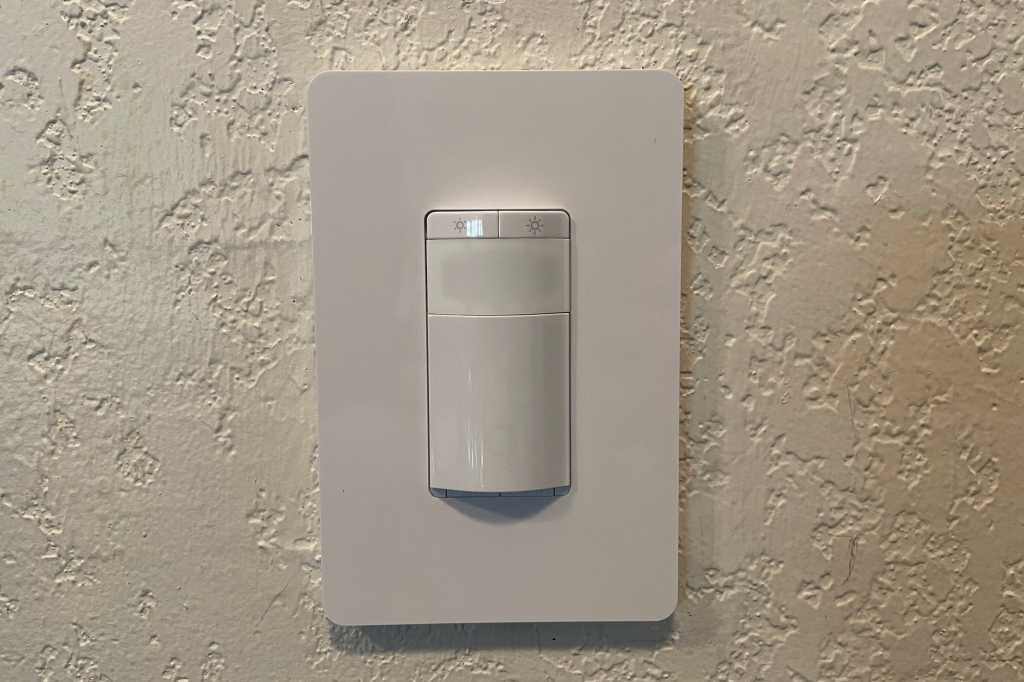 With its model ES20M smart dimmer, TP-Link’s Kasa Smart brand pulled out nearly all the stops in developing an in-wall smart switch: In addition to fade-in/out options, there’s motion sensing, ambient light detection, and, of course, Wi-Fi connectivity that eliminates the need for a smart home hub (it nonetheless is SmartThings compatible). If this switch didn’t require a neutral wire, supported Apple’s HomeKit smart home ecosystem, and could operate on a 3-way circuit, there would be nothing left to add.

This review is part of TechHive’s coverage of the best smart dimmers and switches.

Let’s start by looking at the hardware. It’s an interesting design, with two screw terminals (for the line and load wires) and two pigtails (for the neutral and ground wires). I at first thought this didn’t make sense, switches usually have screw terminals or pigtails, not both. I came realize it’s a great design for an in-wall product. When you remove a typical conventional switch, line, load, and ground will all be hardwired to the switch, while the neutral wire might be in the box but not connected to the switch at all (dumb switches—and a very few smart switches—don’t need a neutral wire. If you need a smart dimmer with motion-sensing features that doesn’t require a neutral wire, take a look at the GE CYNC Smart Dimmer Light Switch + Motion Sensor.)

The easiest way to connect things is to simply replace the existing line and load, run a pigtail to the neutral line (perhaps using the existing wire nut), and connect to the existing ground wire via another wire nut. Why not wire the ground wire directly to a screw terminal on the switch? In my experience, ground wires are always a) too short, and b) too difficult to maneuver into place Connecting to them with a pigtail is often the easiest way.

Wiring a switch like this Kasa Smart is not only easy, it minimizes the number of wire nuts you need (just one more than with the dumb switch you’re upgrading from). This leaves more space inside a crowded junction box, which is particularly important when you’re installing the switch in a double-, triple-, or quad-gang box. When I completed the connections in a single-gang box, I found it fairly easy to get the switch back into place, with the included screwless cover plate easily mounting flush against the wall. My only issue during physical wiring was with the screw terminals for line and load, which I found had to be screwed in very tightly to keep the wires from slipping out.

With the switch hardware in place, I turned to the Kasa app to set it up and begin using the switch’s features. TP-Link hasn’t dramatically upgraded its app in recent years, and it’s still erratic and a little archaic, starting with an old-school routine that has you manually connect to a temporary Wi-Fi network to get things going. Fortunately, the bridging process worked without issue, and I the switch connected successfully to my 2.4GHz Wi-Fi network (5GHz isn’t supported). The app itself is easy enough to get around, though it desperately needs some modern polish and bug fixing. For example, I found it impossible to delete an old group with no devices in it; Kasa would re-create the empty group every time I tried to erase it.

When it comes to controlling the dimmer, I found the app worked just fine. A quick calibration step gave me pause—my lights didn’t dim at all when they were supposed to during testing—but after a firmware update, I found the lights worked as expected. Presets let you choose between four saved brightness levels, or you can move over to the Brightness tab to dial in a new level in one-percent increments. The switch will remember the last brightness setting used when the lights are turned off and back on, and you can configure the length of the fade-on and fade-off features. Manual controls are also available on the hardware itself, courtesy of two small buttons above the pushbutton-style switch, all of which work well.

While a rudimentary scheduling system and countdown timer are present, the ES20M’s real magic is found under the Smart Control menu, where you can configure in extreme detail the way you want motion sensing to work. The idea here is that you might not want the lights to come on automatically or to the same brightness at all times of the day. With Smart Control, you can set up multiple time frames that change how motion sensing works.

I installed the switch in my garage, where I want automatic lighting during nighttime hours, but usually don’t need any lights at all during the day. Thanks to an adjacent window. With the Kasa, I was able to set not only whether to turn the lights on if motion is detected but also if it’s dark in the room – and even how bright to set the lights during this time. During daylight, I set the switch to be manual only, so people coming and going during the day wouldn’t needlessly waste energy by tripping the sensor and turning on the lights. A randomized vacation mode is also available, as is support for Alexa, Google Assistant, and SmartThings.

Again, I found all these features worked flawlessly, with minor caveats. While the sensitivity of motion sensing is tweakable, I found that even the most sensitive setting didn’t pick up movement until I was a few too many steps into the room. That’s a minor complaint, however, and for $40 (frequently on sale for $30), this switch’s few faults are easily overlooked. In fact, I like it so much that I’m giving it perhaps one of my highest praise points: Rather than box it back up, I’m going to leave it installed and use it in my daily life for the foreseeable future