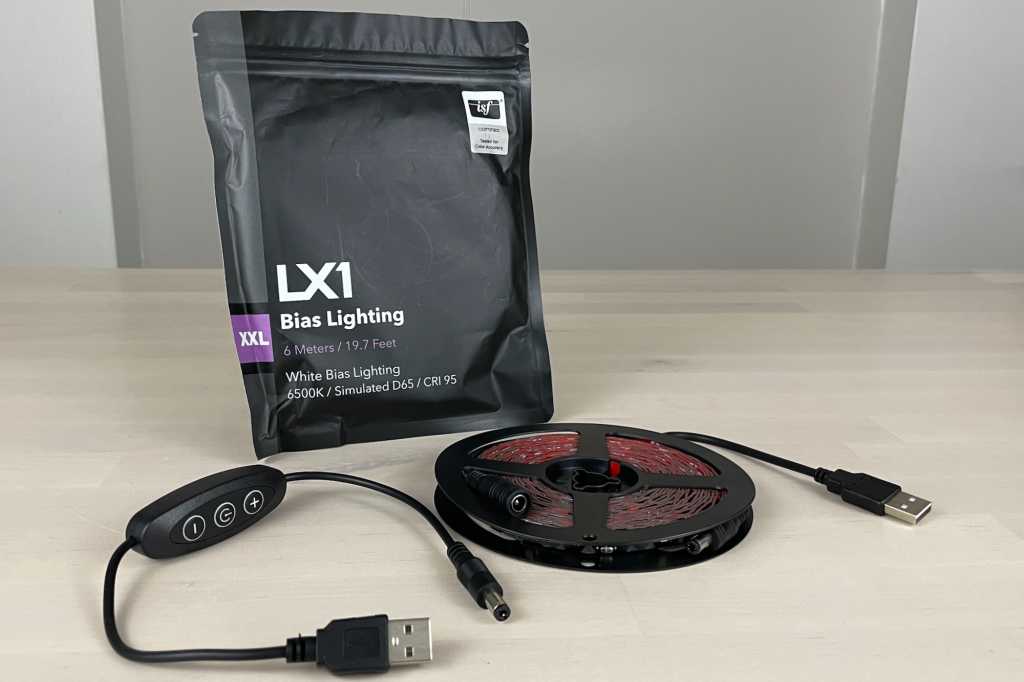 The LX1 bias lighting kit makes for one of the easiest and cheapest ways to upgrade the image on your TV screen.

The best TV bias lighting kits should do their work unobtrusively, boosting the contrast–or to be more precise, the apparent contrast–of your screen without distorting colors in the process, while also reducing eye strain from watching bright images in an otherwise dark room. A bias light should also work with the least amount of friction, meaning it should be easy to install while also turning on with a minimum of fuss.

The LX1 TV bias light kit from Scenic Labs checks all of these boxes. It’s a well made product that can be set up in minutes and casts a neutral, daylight-hued glow–and once installed, you’ll quickly forget it’s there, although you’ll miss it should you decide to turn it off.

Even better, the LX1 is affordable, with the videophiles at Scenic Labs cannily downgrading the features of its professional-grade, MediaLight-branded bias lights to a level that hits the sweet spot for everyday TV viewers.

The LX1 won’t put on a light show that syncs with the colors on your TV screen; for that kind of an effect, you’ll need a product like the Philips Hue Play HDMI Sync Box or the Govee Envisual Backlight T2. But if you want a TV bias light that enhances your TV’s picture without distracting you or distorting the image on your screen, the Scenics Labs LX TV bias lighting kit is your best bet.

This review is part of TechHive’s in-depth coverage of the best bias lighting for TVs.

What are the specifications for the Scenic Labs LX1 TV bias lighting kit?

The LX1 bias lighting kit comes in six lengths, ranging from 1 meter ($29.95) all the way to 6 meters ($54.95) in 1-meter increments. Scenic Labs offers both a size chart and a calculator to help you pick the strip that’s right for you. For example, a 3-meter strip ($39.95) would be adequate for three-sided (top and sides) coverage on a 55-inch TV, while a 6-meter strip would be best for an 80-inch TV with coverage on all four sides (top, sides, and bottom). Scenic Labs sent me the 5- and 6-meter LX1 versions, and I ended up testing the former.

The 8mm-wide LX1 strip has a color temperature that’s been tuned to 6500 Kelvin. That’s roughly the color of daylight on a hazy day, and it’s the standard that video professionals and filmmakers use as the color that “white” looks like. By sticking to the 6500K standard, the LX1’s glow shouldn’t distort the way colors look on your TV screen.

The LX1 comes with 20 LEDs per meter, and it has a CRI (short for Color Rendering Index, a measure of how accurate colors look on an object illuminated by the evaluated light) of 95. That’s pretty dang good, but not as accurate as Scenic Labs’ top-of-the-line bias lighting strip, the 30-LED-per-meter MediaLight Pro2, which has a CRI of 99. Then again, the MediaLight Pro2 (which ranges from $69.95 for a 1-meter strip to $269.95 for 6 meters) is designed more for videographers working with $20,000 color-grading monitors. For the rest of us, the Pro2’s level of color accuracy is overkill.

At the end of the LX1 strip is a 5-inch cable with a DC connector, and that connector allows for a variety of optional accessories.

The LX1 ships with an in-line, three-button (up, down, power) dimmer control that snaps onto the DC connector, but you could also opt for a flicker-free, non-PWM dimmer for $14.95 (pictured below and at the top of this review), an infrared dimmer remote for $13 (a specific IR remote designed for Sony Bravia and Vizio TVs goes for $7), or even a $14.95 Wi-Fi dongle that works with Alexa and Google Home (I tried it and yes, it works, although the app is a tad clunky).

If you do want to buy one of the optional dimmers or remotes, you can remove the LX1’s included three-button control at checkout; doing so knocks $5 off the price tag.

How do you install the Scenic Labs LX1 TV bias lighting kit?

Like other LED bias lighting strips, the LX1 has a peel-and-stick backing, and you simply stick the strip onto the back of your TV. You should do some measuring first, of course, and then cut the LX1 to fit, being careful to snip along the designated section.

Scenic Labs recommends you align the LX1 so it’s two inches from the edge of your TV, and you can run the strip along either three edges of your set or all four. A three-edge setup is probably best if your TV is sitting on a stand or on the floor, while a four-edge installation is ideal if your TV is mounted on the wall.

Since my TV is on a media cabinet, I only ran the LX1 along the top and sides of my TV, carefully bending the strip around the corners. OLED TV owners will likely also have to contend with the bulky speaker box that juts out of the bottom of their sets; I followed Scenic Labs’s advice and simply pulled the strip tight, leaving a gap on the sides where the speaker pack meets the flat edge of the razor-thin TV panel.

Next, I plugged the included, inline three-button dimmer into the DC connector at the end of the strip, then plugged in a second cable (roughly 10 inches long) that terminates in a USB-A power port, which I connected to the USB-A port on the back of my LG C9 OLED TV. Doing so had the effect of turning on the light strip whenever I turned on the TV. The strip typically stayed on for a minute or so after I switched off my set, but reliably turned off after that.

If your TV’s USB port doesn’t turn the strip on and off automatically (some Sony Bravia TVs have this problem, apparently), you could always try one of the optional dimmer remotes, or use the Wi-Fi module for smart home integrations.

Finally, I set the brightness of the strip using the dimmer switch. For its part, Scenic Labs says the “perceived” light behind your TV should be no greater than 10 to 15 percent of the maximum brightness of the screen; a reference pattern on YouTube can help you set the brightness correctly. After a little fiddling, I settled for the very bottom step on the LX1. The strip remembers the setting you picked even after you turn it off. Incidentally, both Alexa and Google Assistant can control the LX1’s brightness if you use the optional Wi-Fi dongle.

How does the Scenic Labs LX1 perform?

I was skeptical about the need for a bias lighting kit with an OLED TV like my LG C9, but even with the perfect black levels on my set, the LX1 managed to boost the LG’s contrast while also giving my eyes a break during extended viewing sessions.

It took me a few days to get used to the glow of the LX1 behind my LG C9; previously, I used bias lighting regularly with a Sony Bravia LCD that badly needed the contrast boost. But within about a week, I forgot that the LX1 was there, and when I tried using my set with the LX1 switched off, I found myself missing the bias light.

As I noted earlier, the LX1 worked almost perfectly with my LG when it came to powering itself on and off, with the exception of a slight delay when powering my TV down. For the most part, however, operating the LX1 beyond the initial setup process and brightness adjustment was a literal no-brainer.

Is the Scenic Labs LX1 worth the cash?

The LX1 bias lighting kit makes for one of the easiest and cheapest ways to upgrade the image on your TV screen. It’s simple to install, flexible in terms of dimming and remote options, and it works with Alexa and Google Assistant if you pony up for an inexpensive Wi-Fi dongle. Even the best OLED TV could benefit with the LX1 light strip glowing behind it.