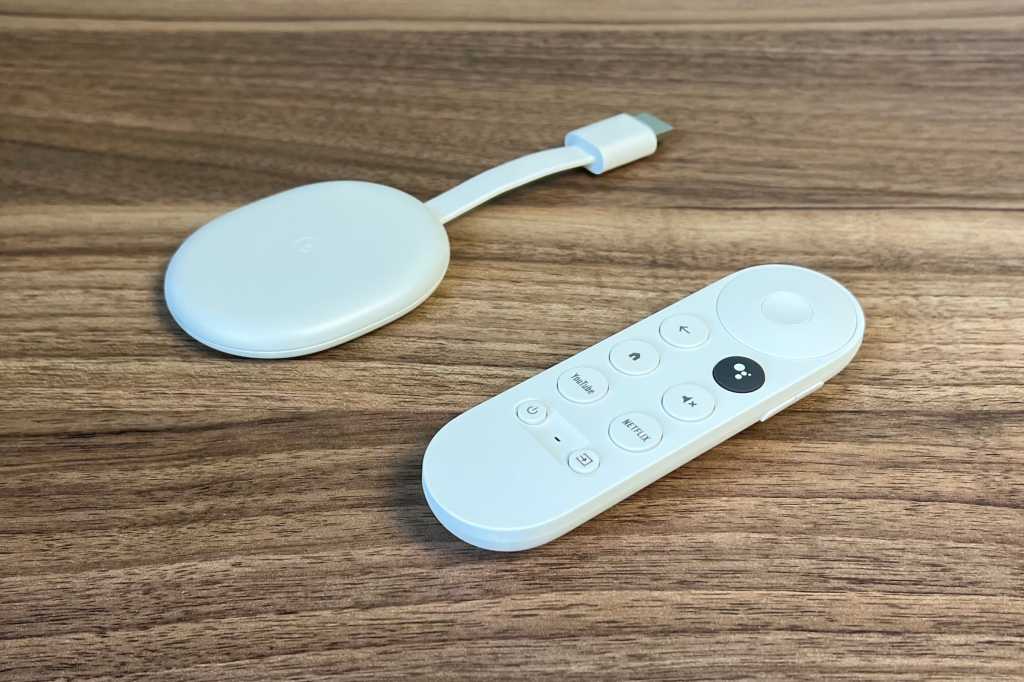 Jared Newman / Foundry
At a glance

If you only judge by the sticker price, the Chromecast with Google TV HD is the best streaming device you can buy for the least amount of money.

For $30, you get a streaming dongle with a feature-rich remote, powerful voice controls, and a useful system for figuring out what to watch. On features alone, it’s a better value than both the Roku Express and Amazon Fire TV Stick Lite, which each cost $30 as well.

This review is part of TechHive’s in-depth coverage of the best media streaming devices.

But when you factor in sale prices, the calculation gets trickier. Google often cuts the price of its superior 4K Chromecast to $40, and both Amazon and Roku frequently sell their own 4K streaming dongles for even less. And while Google has come up with an innovative menu system for streaming, its rivals have been catching up on ways to make sense of your TV options.

That means the Chromecast with Google TV is only worth buying if you don’t care about future-proofing for a 4K TV and are all-in on the Google TV interface. Otherwise, you’re better off looking elsewhere.

Unlike Chromecasts from 2018 and earlier, the new model has a proper remote and on-screen menu system, with apps for all the major streaming services. From the outside, it’s almost identical to the 4K version that launched in 2020, with the only distinction being an “HD” logo on the back.

But inside, the new Chromecast sports a different chip that’s limited to 1080p resolution at 60 frames per second, and while it can play high dynamic range content in HDR10, HDR10+, and HLG formats, it doesn’t support Dolby Vision. Dolby Atmos audio is also limited to apps that support it via passthrough. (Netflix, notably, does not.)

The Chromecast HD’s remote is identical to the 4K model, sporting a directional pad; home and back buttons; a Google Assistant voice control button; shortcuts for YouTube and Netflix; and controls for TV volume, power, input, and muting. The only things missing are dedicated fast forward and rewind buttons, which is mainly a problem in apps that don’t map those functions to the D-pad. (Looking at you, Peacock.)

It all adds up to a capable hardware package for the money. This is the only $30 streamer that puts TV volume and power controls on its remote, and performance is usually snappy, with an almost bouncy way of sliding between menu tiles. You will notice the occasional skip or stutter when the device is loading large menu sections, but it seldom becomes an annoyance.

The only real nit to pick here is the 8GB of onboard storage, which feels skimpy amid a proliferation of streaming apps. While Google’s menu system can help identify apps to remove when space runs low, it still can’t match the automatic storage management you get on Roku players.

Much like the 4K model, the Chromecast with Google TV HD treats individual apps as something of an afterthought. While the device does offer a strip of app icons, you’re really supposed to browse for movies and shows directly on the home screen.

Google TV will suggest what to watch from popular streaming services such as Amazon Prime, Hulu, and HBO Max, and selecting a program will take you straight to it in the corresponding app. When you watch something in a supported app, it automatically feeds into a “Continue Watching” row on the home screen, and you can also manually add programs to a universal watchlist.

While you might dismiss these recommendations as glorified ads, Google for the most part lets you choose which services populate the home screen. That’s a big improvement over the Fire TV home screen and Roku “What to Watch” menu, which give you almost no say over what shows up.

Google TV also features a “Live” menu that aggregates channels from sources such as YouTube TV, Sling TV, and Pluto TV, similar to that of Amazon’s Fire TV devices. Voice control is excellent as well, able to handle complex genre requests and you can launch shows directly in supported apps.

That said, Google TV’s forward-thinking menu is occasionally marred by the realpolitik of the streaming wars.

Netflix, for instance, famously stopped recommending original shows on Google’s home screen in late 2020, and Amazon Prime doesn’t work with the aforementioned “Continue Watching” row. Google itself is even guilty of larding up its own home screen with recommendations from YouTube, which you’re not allowed to hide.

These kinds of issues aren’t unique to Google TV, but they are more apparent because of how Google puts its universal guide front and center. The result overall is a menu system that’s helpful for navigating an increasingly confusing TV landscape, but one that still feels incomplete.

A couple other stray quibbles worth noting:

If all this leaves you on the fence about the new Chromecast, the last thing to consider is how it would fit into your overall gadget roster.

The new Chromecast still supports casting from phones and tablets. For Android phone users in particular, it may be a better fit than a Roku player, which supports casting via Apple’s AirPlay system or the Roku mobile app. The Chromecast can also display your Google Photos albums in screensaver mode, and you can tie it into a multi-room audio setup with other Nest speakers.

Chromecasts also play nicely with Google Assistant, so you can use the remote to check in on video cameras or control smart home devices you’ve set up through the Google Home app. You can also use “Hey Google” voice commands to launch videos on the TV from a nearby Nest speaker.

The Chromecast with Google TV HD is a strong contender for older 1080p TVs that you don’t plan to upgrade any time soon. It has a smart menu system, a capable remote, and some helpful connections to the rest of the Google ecosystem. Still, most folks who are keen on Google’s content-first approach should opt for the 4K model, keeping in mind that it often drops to $40 instead of the usual $50.

Meanwhile, Google’s competitors have their own compelling alternatives. Amazon’s Fire TV Stick and Fire TV Stick 4K dropped to $20 and $25 respectively during Prime Day, and they’re fine options for folks who are invested in Amazon’s smart home ecosystem. As for Roku, it will soon roll out “Continue Watching” and “What to Watch” features to help make sense of streaming, boosting budget streamers like the $40 Roku Express 4K+. (That one often dips to as low as $25.) It’s worth noting that Roku is moving into the smart home space as well, with an array of home security products that it intends to integrate into the Roku TV experience..

Google TV’s universal guide is more refined than either system, though, and it now has budget hardware to match. If it could only stay in lockstep with its competitors when it comes to sale prices, it might just be unbeatable.