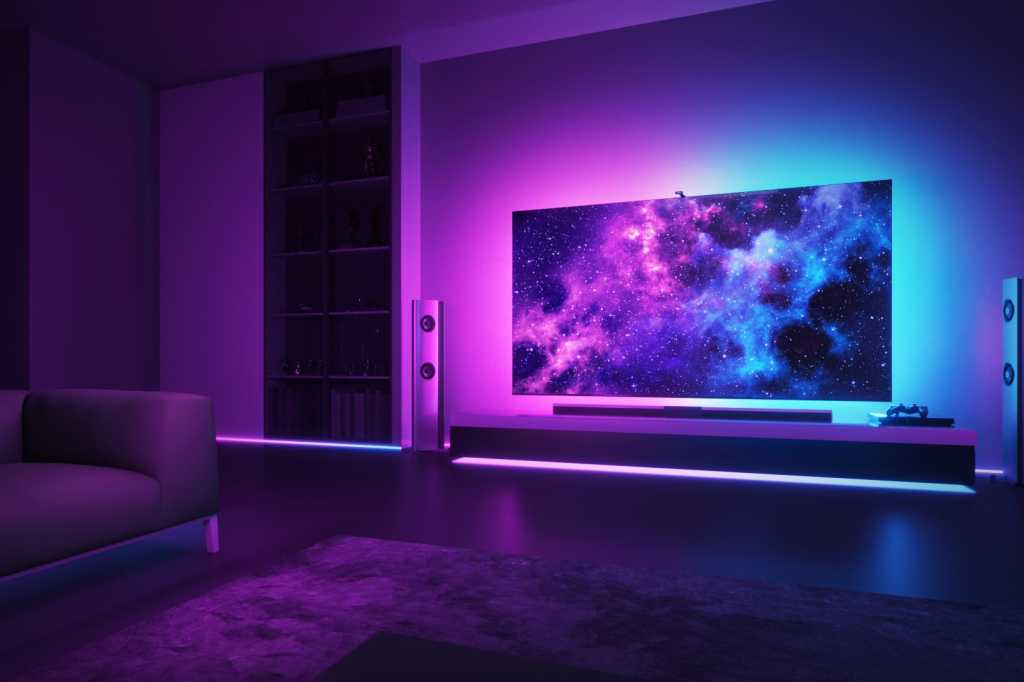 Govee
At a glance

This upgrade to Govee’s bias lighting system corrects numerous prior ills, making for a fun enhancement to TV and gaming sessions.

Govee’s Immersion Light Kit, which I reviewed a year ago, sure did sound good on paper, letting you add lighting effects behind your television to illuminate the wall and imbuing it with a sense of three-dimensional immersion. So-called bias lighting can be expensive, though cheaper and cheaper options like the Govee kit continue to hit the market.

The problem with Govee’s original kit was that it didn’t work that well. Calibration was awkward and difficult, the lights weren’t bright enough, and the colors shifted so quickly that motion sickness ensued during testing. Further, the use of plastic, vertical “light bars” placed to the sides of the TV seemed superfluous and looked more than a little cheap.

The good news: With the Envisual TV Backlight T2, Govee has revamped its bias lighting product, solving many of its previous problems, jettisoning the light bars, and making for an all-around more compelling product. That said, it’s still a niche item that is more novelty than anything approaching an essential.

This review is part of TechHive’s in-depth coverage of the best bias lighting for TVs.

What sizes of the Envisual TV Backlight T2 are available?

The main difference between the two involves the length of adhesive LED cable you receive in the box.

How do you set up the Govee Envisual TV Backlight T2?

To set up the system, you carefully snake the LED cable around the rear perimeter of the television, while additional slick-on clips allow you to bolster the adhesive.

A camera unit–now containing two lenses rather than just one–perches on top of the television with a weighted counterbalance; you needn’t affix this unit to the TV unless you desire more stability.

Both the LED cable and the camera plug into a control box, which you again stick to the back of the television with tape. Finally, a power cord connects the control box to a wall outlet. As with the old Immersion Kit, none of Govee components connects to the TV’s electronics in any way.

How do you calibrate the Govee Envisual TV Backlight T2?

Calibration is a process similar to that of the old Immersion Kit, though the use of two cameras–one for the right side of the TV, one for the left–makes the process a whole lot easier.

The system works by training the cameras on the TV screen; the ultra-fish-eye lens detects the dominant color in each section of the screen, then instructs the LED lighting to mimic said color.

But first, the Govee kit needs to know where the edges of your screen are, a process you complete by sticking temporary orange foam squares to the sides and corners of the screen, then telling the Govee app where the stickers are.

While the two improved cameras help to smooth out the calibration, the awkward process will likely stymie anyone who’s not a visual thinker.

Can you control the Govee Envisual TV Backlight T2 with an app?

Setting up the hardware and performing the calibration are the most time-consuming parts of the installation process, as Govee’s app is mature and streamlined and no longer prone to the disconnects of yesteryear.

The app quickly connects to the lighting system via Bluetooth, then bridges easily to 2.4GHz Wi-Fi. Alexa and Google Home are both supported, which is handy because unlike many other Govee devices, this one doesn’t come with a remote control.

How does the Govee Envisual TV Backlight T2 work?

In regular use, the system works much like its predecessor. A variety of operational modes let you tune the system to a static color, mimic various scenes like a sunrise or sunset, “pop” in time with sound and music, or create whatever colorful DIY ideas you might have.

Of course, most of those modes won’t ever be used. The default Video mode is the only one that works with the camera setup and, since this is exactly what the device was designed for, it’s the one that makes the most sense. Advanced options let you tweak color saturation, white balance, and whether you want sound effects to impact the lighting effects.

I am happy to report that the Envisual TV Backlight T2 is smoother and more fluid than last year’s herky-jerky model, which goes a long way to making the newer version a more soothing, immersive experience. I found it quite fun (and natural) to play games with the Govee system active, while the movie-watching experience felt enhanced as well.

I initially had some trouble with color representation–the bottom right lights would always be very red and the top right somewhat yellow-green–but a firmware update several days into my testing evened things out a bit.

That said, even after the upgrade, the Govee system still seemed to overly favor red around the edges, so hopefully continued firmware updates will help smooth this out further.

Is the Govee Envisual TV Backlight T2 worth the cash?

It would be a stretch to call the Govee TV Backlight T2 an essential part of your entertainment center. That said, this version is at least a lot easier to use than its predecessor and looks better when it’s in operation.

While it’s a product I can live without, I’ve come to miss the Envisual TV Backlight T2 when it isn’t turned on.