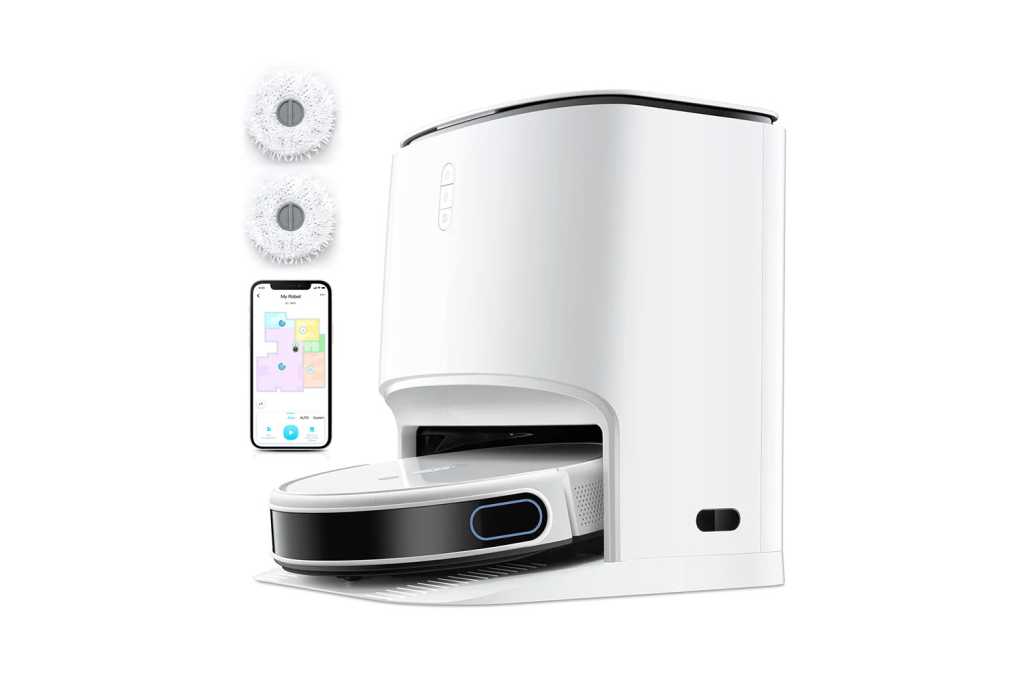 Yeedi
At a glance

The Yeedi Mop Station Pro provides a better cleaning than most mopping robot vacuums thanks to two rotating mop heads. Its inability to map multiple floors, however, might limit its utility to smaller homes.

A robot that both vacuums and mops sounds like a double-duty dream appliance. Who wouldn’t love to put their feet up while one of these household helpers first sweeps the debris off the floor and then scrubs away any stains? In practice, though, we’ve found that these hybrid floor cleaners generally vacuum better than they mop. The problem is the mopping method most of them use—dragging a dampened microfiber cloth over the floor–doesn’t deliver enough elbow grease or the necessary back-and-forth motion to lift stains and stubborn dirt. These mopping robot vacuums also require a fair amount of manual assistance as their small water reservoirs need frequent refilling, and their mop cloths tend to quickly get mucked up with dirt.

This review is part of TechHive’s in-depth coverage of the best robot vacuums.

The Yeedi Mop Station takes a different tack. Instead of a microfiber cloth, it uses a pair of rotating mopping pads that scrub rather than just wipe down hard-surface floors. And its dock doubles as a water tank and self-cleaning station. Yeedi Technology is not the first to take this approach; we’ve seen similar designs with the Dreame Technology W10 and the Narwal Robotic Cleaner. And like those products, the Yeedi Mop Station delivers a superior cleaning compared to many other mop/vac hybrids.

The robot itself looks much like any other, with a mapping sensor on top and a roller brush and edge brush underneath. It comes with separate sweeping and mopping components. The first is a 750ml dustbin that comes preinstalled and is used when you only want to vacuum. The second is a similar bin that has posts on the bottom where the mopping pads attach. You swap this component in when you want to vacuum and mop together.

The charging/self-cleaning station looks like a small trash can grafted onto a standard dock. It measures 17 x 15 x 16 inches and contains a pair of 3500ml tanks for clean and dirty water. Each has a handle attached to its latched lid so you can easily carry it back and forth from the sink. A second set of mopping pads and a brush tool for cleaning the tanks are also included.

Setting up the Yeedi Mop Station Pro is straightforward. You’ll need to download the Yeedi app and follow a series of prompts to connect the robot to your Wi-Fi. There’s little assembly needed other than attaching the edge brush to the bottom of the robot and filling the clean water tank. The only potential difficulty is finding space for the bulky charging station as it needs a few feet of clearance on either side and in front of it for the robot to be able to maneuver in and out.

The robot moves in a methodical up-and-down motion when vacuuming, pausing briefly when it senses or bumps into an obstacle before maneuvering around it. It transitioned smoothly between hard flooring and carpet in my testing and was able to get under a couch and back out again without getting stuck. During these vacuuming runs, it completely sucked up dust, food crumbs, and pet hair from hard floors with no trouble. On carpet, which it detects automatically and boosts its suction, it sometimes left some debris stuck in the fibers even after multiple passes.

The rotating pads do a much better job of mopping than a stationary cloth, though you will still need to keep a stick mop around for tougher stains. You probably won’t need to pull that out as frequently though; the Yeedi Mop Station Pro was able to handle daily grime and even light spills all on its own. Even when my floors looked clean before mopping, I was surprised to see how dirty the wastewater was.

The robot returns to its docking station about every 10 minutes during mopping jobs to have its pads cleaned and its built-in water tank refilled. This takes a minute or two and then the robot resumes cleaning where it left off. The pads are cleaned again and then air-dried after the completion of the job. You’ll also need to clean the wastewater tank after each use.

Some of the robot’s functions, such as starting and stopping cleaning jobs and calling the robot back to its dock, can be controlled by buttons on the docking station or the robot itself. But the Yeedi app provides complete control from a simple, attractive interface. The current map is displayed at the top of the main screen along with real-time data about the current cleaning job. You can scroll through several widgets stacked below the map to access controls for suction power and water level, to schedule cleaning jobs, and to customize cleaning settings.

Among the customization options is the ability to create virtual boundaries on maps and apply them to vacuuming, mopping, or both. There’s also an option to create specific cleaning areas to which you can send the robot. Currently, the app can only store a single map, so if you want to use the robot both upstairs and downstairs, you’d need to recreate a map each time you switched floors.

That shortcoming will almost certainly be remedied in a future app update. At any rate, it’s a minor blemish on what is one of the better mopping robot vacuums we’ve seen. Comparing it to the two similar models mentioned earlier, it has a definitive edge over the Narwal Robotic Cleaner, which is hamstrung by an abysmal app. I’m tempted to say it’s the equal of the Dreame Technology W10, but here again, the app is the determining factor: The W10 can store up to three maps, making it the better choice for multilevel homes. If that’s not a concern, the Yeedi Mop Station Pro is well worth consideration.