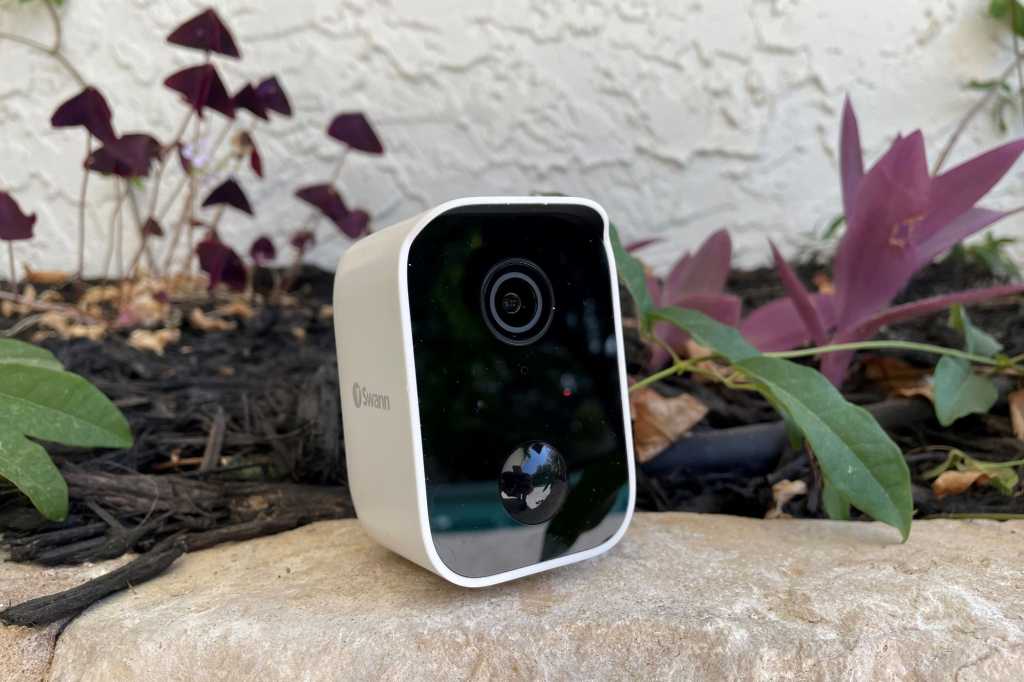 Filled with features that work well, this is probably the best Wi-Fi camera in Swann’s arsenal today.

More typically known for building sleek, pricy, and somewhat overcomplicated security cameras, Swann’s CoreCam indoor/outdoor security camera is a readily attainable device that, while still on the expensive side, has so much going for it that it’s hard not to recommend.

On paper, the formula doesn’t vary much from Swann’s existing lineup. The compact unit—it’s smaller than most Swann cameras, measuring 3.15 x 2.17 x 2.68 inches (HxWxD) and weighing 7.36 ounces—is designed to be completely wireless and self-contained. An internal 6000mAh battery charges via micro-USB cable (an optional solar panel costs $30), and there’s and an onboard microSD card slot (a 32GB is card included) to stores clip locally. Recordings area also stored in the cloud for 24 hours.

Swann rates the camera IP65 for weatherproofing, meaning it’s impervious to dust and projected from water jets coming from any direction (a rubber flap covers its ports). It can either sit on a tabletop/bookshelf or be mounted to a wall with the included hardware.

The feature list covers just about everything you could want in a basic security camera: It sets up easily on a 2.4GHz Wi-Fi network with a quick scan of a QR code, after which you’re off and running. A maximum resolution of 1920 x 1080 pixels is plenty (pro tip: the default resolution is set to “low,” which you’ll want to increase in order to see anything clearly), and while the 100-degree viewing angle isn’t ultra-wide, it does mean you get less of a fish-eye viewpoint when you play back video.

The camera supports two-way audio and infrared (i.e., black and white) night vision. There’s also an integrated siren if you want to use the system as a makeshift alarm when motion is detected.

I used the camera for several days and found all its features to be solid. Live video loads quickly, and recordings are available for playback as soon as they stop, although clips stored on the memory card bizarrely don’t always appear in chronological order. Clip length is limited to 60 seconds at most—with 15 seconds being the default—but this limitation can be minimized by adjusting the “sleep period” cooldown setting within the app. This cooldown can be adjusted anywhere from 300 seconds to zero, so if there’s sustained motion taking place, the camera can essentially keep recording indefinitely with only minor pauses between clips. (This will greatly reduce battery life; a full charge is specified to provide 3 months of running time based on average usage.) Users with video-based Alexa or Google Assistant devices can also access the Swann feed without using the app.

The camera includes a variety of motion detection options based on the nearness of the movement; “close” settings will minimize false alarms, while “far” and “maximum” settings will maximize recording time. The unit also includes a person detection system that can trigger the camera to record at a different distance, the idea being that you will probably set this level to “far” or “maximum” while using a closer setting for general motion detection. The CoreCam can also be configured with a motion detection mask to ignore motion in certain parts of the frame, though you’ll need to remember to reset the mask if you move the camera for recharging or other purposes.

I was quite impressed with the clarity of the CoreCam’s image quality, especially during the day. Night vision was also impressive in my testing, though the 50-foot range specified by Swann might be a bit aggressive.

Swann’s Secure+ cloud service is totally optional, but if you want more than 24 hours of cloud storage, you can stretch this to 60 days for $3/month or $30/year for one Swann device, or $10/month or $100/year for unlimited Swann devices. The Secure+ plan also adds an alerting system for any pets, cars, and packages that appear in the frame, notifications that include a thumbnail, and 24 extra months on your warranty. The first 90 days are free. Most users probably won’t need this plan given the onboard storage capabilities and basic cloud service plan, but it’s not a bad buy if you’re looking for extra insurance.

The small solar panel is also a good idea for users in outdoor, highly sunlight settings. While Swann specifies three months of battery life on a charge, I would probably be lucky to get a third of that based on my (admittedly heavy) testing. The $130 Swann CoreCam isn’t cheap, but it’s a much better deal—and a better all-around product—than the $180 Swann Xtreem I reviewed in June 2021.