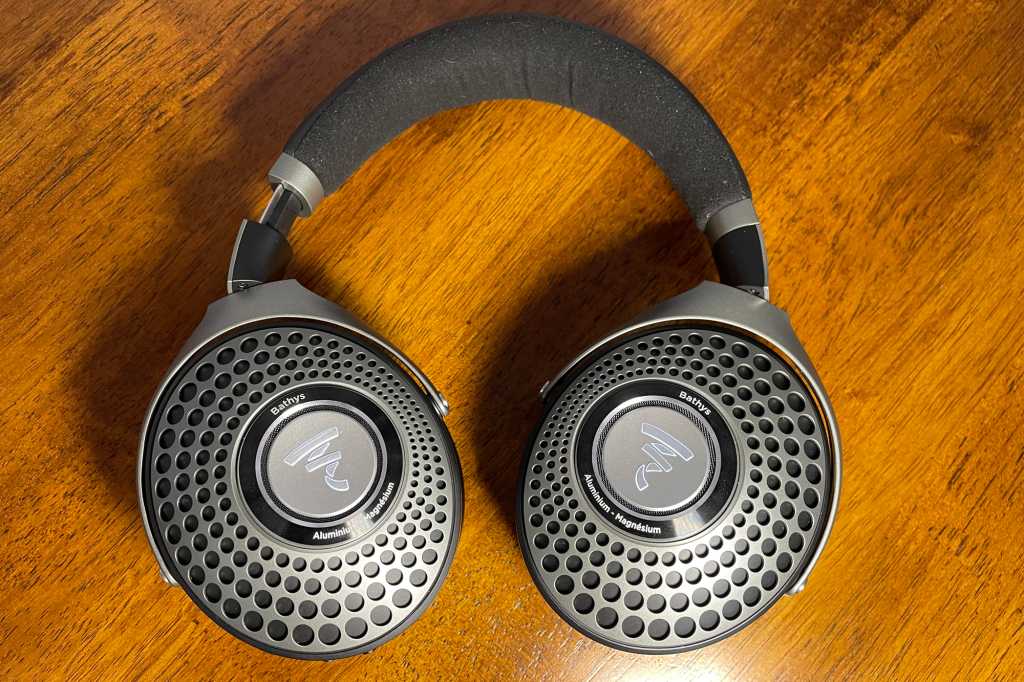 The Focal Bathys are the world’s best-sounding wireless headphones. They’re also among the most expensive and luxurious. But I can’t say they’re the best noise-cancelling headphones. And having said all that, I’m sure some audio purists will greet Focal’s digital accomplishment with all the enthusiasm folk purists displayed the day Bob Dylan “went electric” at the Newport Folk Festival in 1965.

But before we get too deep into this evaluation, let me answer the two questions I’m sure are at the front of your mind: First, how the heck did Focal come up with “Bathys” as a name for a high-performance headphone? The company says the name is based on “bathyscaphe,” the first self-propelled, deep-diving submarine. It’s an ironic choice, given that I never experienced that “underwater” feeling that some listeners say noise-cancelling headphones inflict on them.

Second, is the Bathys $799 price tag justified? Yes, absolutely. Do they deliver twice the value as, say, Sony’s excellent $399 WH-1000XM5, which don’t measure up sonically, but do deliver better noise cancellation? Probably not. But I did enjoy listening to them more than I did the $999 Mark Levinson No. 5909—and the Bathys were more comfortable to wear to boot. I’ve also had Bowers & Wilkins’ equally luxurious Px8 headphone ($699) in house for a few days, but not long enough for me to feel comfortable making an in-depth comparison.

One of the several features that set the Bathys apart from most other headphones is the presence of an onboard DAC. While that isn’t unusual—all wireless headphones have DACs, because they must convert Bluetooth audio from digital to analog—the Bathys’ DAC allows the headphone to function as a USB Audio device.

Where Bluetooth is limited to a maximum sampling rate of 48kHz (and that ceiling is typically much lower), using the Bathys for digital-to-audio conversion connected to your source via a USB-C cable endows it with a maximum sampling rate of 192kHz. Note that iPhone users will need a Lightning-to-USB-C adapter to take advantage of this feature. Focal is reticent to reveal much information about the DAC they chose for the Bathys. When I quizzed Focal product manager Megane Montabonel on the subject, she would say only that it was sourced from a third party, declining to disclose the make and model.

Speaking of Bluetooth (5.1 multipoint in this case, meaning the Bathys can maintain connections to two sources at once), Focal supports the SBC, AAC, aptX, and aptX Adaptive codecs, but not Sony’s excellent LDAC. While the Bathys have been in development for more than three years, Montabonel told me the engineering team wasn’t able to implement LDAC support before the time came to freeze the electronics, but that Focal hopes to add the feature later.

While the Bathys support the MQA format, Montabonel said the playback device and/or the codec being could impose limitations by downsampling the signal. Where an MQA stream can be as much as 9,216Kbps, Montabonel said, the aptX Adaptive codec could “compress the data [rate] to between 279Kbps to 420Kbps.” She also said “a lot of Android devices are limiting USB Audio to 48kHz.” Meanwhile, the Bathys do not support DSD bitstreams at all.

The Bathys have a 3.5mm analog input for those who want an all-analog experience, but these headphones can’t be used passively—meaning the onboard amplifier can’t be bypassed. But this headphone sounds so magnificent, I can’t imagine that many people will mind.

The Bathys’ drivers and build quality

The Focal Bathys feature neodymium magnets and 40mm full-range aluminum/magnesium-dome drivers fabricated at Focal’s workshop in Saint-Étienne, France, following many of the same design principles used to develop other Focal headphones, including Celestee ($999) and Utopia ($4,999), according to Montabonel. Like several other Focal headphone models, a cross-section of the Bathys’ dome drivers resembles the letter “M,” a characteristic the company says delivers higher rigidity for enhanced precision and reduced distortion. Focal claims frequency response of 15Hz to 22kHz (no tolerance given), with total harmonic distortion of less than 0.2% @1kHz.

The headphone’s other components are manufactured elsewhere, with final assembly performed in Asia (China, presumably). The Bathys’ headband is constructed mostly from aluminum, with bits of plastic here and there. Adjustments are indexed and deliver tactile feedback with a satisfying click when you push or pull the earcups.

The yokes that connect the circumaural (over-ear) earcups to the headband are fabricated from magnesium and allow you to turn the earcups flat, so you can store the headphone in its fabric-covered hard-shell case. Montabonel says using magnesium instead of aluminum for this component delivered a weight savings of 10 grams (about 0.35 ounces). That said, the Bathys are heavier travel companions than some of the wireless headphones we’ve reviewed lately. I weighed them at 12.6 ounces, compared to 11.2 ounces for the B&W Px8 and just 9 ounces for the Sony WH-1000XM5 (which are entirely plastic). The Mark Levinson No. 5909 also tip the scales at 12.6 ounces.

Focal wraps the top of the Bathys’ headband and its earcups in supremely soft lambskin. The bottom of the headband is covered with a suede-like microfiber. The oval earcups measure about 2-3/8 inches tall, just high enough so they didn’t rest on my outer ear, and they’re narrow enough so they don’t press on the arms of my eyeglasses. The drivers are recessed deep into the earcups—about an inch at their deepest point—and are slightly angled. If the distinctive pattern on the outer earcups doesn’t turn heads, the LED-backlit Focal “flame” logos on each side certainly will (you can turn that feature off in Focal’s app).

You needn’t worry that those LEDs will sap the Bathy’s battery life. The company says you can expect 30 hours in Bluetooth, with the LEDs lit and noise cancelling enabled. You can stretch that to 35 hours using the provided 3.5mm analog audio cable, and to 40 hours in USB DAC mode.

There are generous amounts of memory foam padding on the bottom of the headband and on the earcups, which can be replaced if they wear out. The headphone clamped my head with just the right amount of pressure on the top and sides to provide a good degree of passive noise isolation, and I listened to them for many hours without discomfort or developing sweaty ears. Volume control and Bluetooth pairing buttons are on the right-hand earcup, along with a button for summoning either Amazon Alexa or Google Assistant (you just push the button, you don’t need to speak the wake word).

Noise cancellation on the Focal Bathys

The Focal Bathys are equipped with eight microphones, two for phone calls and the other six for noise cancelling (four inside the earcups and two outside). The headphone has two noise-cancelling modes: Soft, when you need just a little noise cancellation in a moderately quiet environment (at home or in the office, for example), and Silent, when there’s a high amount of background noise (think trains, subways, and airplanes). A quick press of the button toggles between whichever of the two noise cancelling modes is engaged and Transparent (noise-cancelling off). Transparent mode will also pipe sound from the headphone’s mics, so you can be aware of your surroundings.

A long press of the button will toggle between Soft or Silent noise-cancelling modes. You can also switch between all three modes by tapping buttons in Focal’s app. This all sounds more complicated than it really is—at least once you get the hang of it. I did find Sony’s noise cancellation, however, to even more more effective than Focal’s, and Focal doesn’t offer some of the high-tech conveniences Sony offers. Speaking won’t mute the Bathys, like Sony’s WH-1000XM5 do, for instance, and taking them off your head won’t automatically pause whatever music you’re listening to. But the Bathys’ higher-fidelity audio experience trumps both those gee-whiz features in my book.

Listening tests with the Focal Bathys

The Focal Bathys are an absolute joy to listen to, wired or wireless, and they never failed to reveal details in songs I thought I had already deeply explored. I rarely listen to pop music, but I was quite taken with Taylor Swift’s 2020 album Folklore and I relistened to several tracks during this review. While listening to the track “Invisible String,” my ears pricked up at the ethereal string accompaniment—the cello in particular—as it shifts from pizzicato to bows drawn across the strings at about the 2:10 mark.

I wouldn’t characterize the Bathys as a bass monster, but I have absolutely no complaints about its low-end performance. Playing Rhiannon Giddens’ “Moonshiners’ Daughter,” from her Factory Girl album, these headphones reproduced the string bass without flattening the midrange where the fiddle and guitar live. The headphone also revealed a subtle rattle in the drum beat that opens the song, a high-frequency detail I didn’t pick up while listening to the Sony WH-1000XM5.

I had such difficulty finding the right/left markings on the Bathys’ earcups that I had to ask Focal’s Montabonel where they were. The indicators are located right above the yokes in gloss back on a matte black background, so you need to hold the headphones just so to reflect enough light to see them. But it didn’t take me long to remember that the right-hand earcup is where most of the buttons are located, and those are much easier to find. The headphones also don’t feel right when you put them on reversed.

While I’m picking nits, Focal’s travel case is much less luxurious than the leather-wrapped case that Mark Levinson provides. And where both B&W and Mark Levinson provide a lidded compartment for cables and accessories, Focal merely offers a net pocket for the 4-foot USB-C and 3.5mm analog cables that come with the headphone. You’ll need to provide your own airline adapter and your own Lightning-to-USB-C adapter if you want to take advantage of the onboard DAC. Like I said, I’m picking nits; but when you’re spending $799, nits can matter.

Are the Focal Bathys really worth $799?

I suppose that question ultimately turns on how badly you want to buy a new set of noise-cancelling headphones right now. Sony delivers excellent cans with better noise cancellation for half that much, but they can’t compete in terms of audio performance, luxury, or perhaps durability (plastic just isn’t as long-lasting a material as aluminum or magnesium). If you’ve already set aside $400, and you have the patience to save another $400, Focal will reward you richly for waiting.

It’s rare for a company to hit a home run on its rookie effort, but Focal has not only done it with the Bathys, it’s raised the bar in terms of wireless audio performance. Noise cancellation does take a back seat to fidelity here, but I’m fine with that tradeoff. How about you?