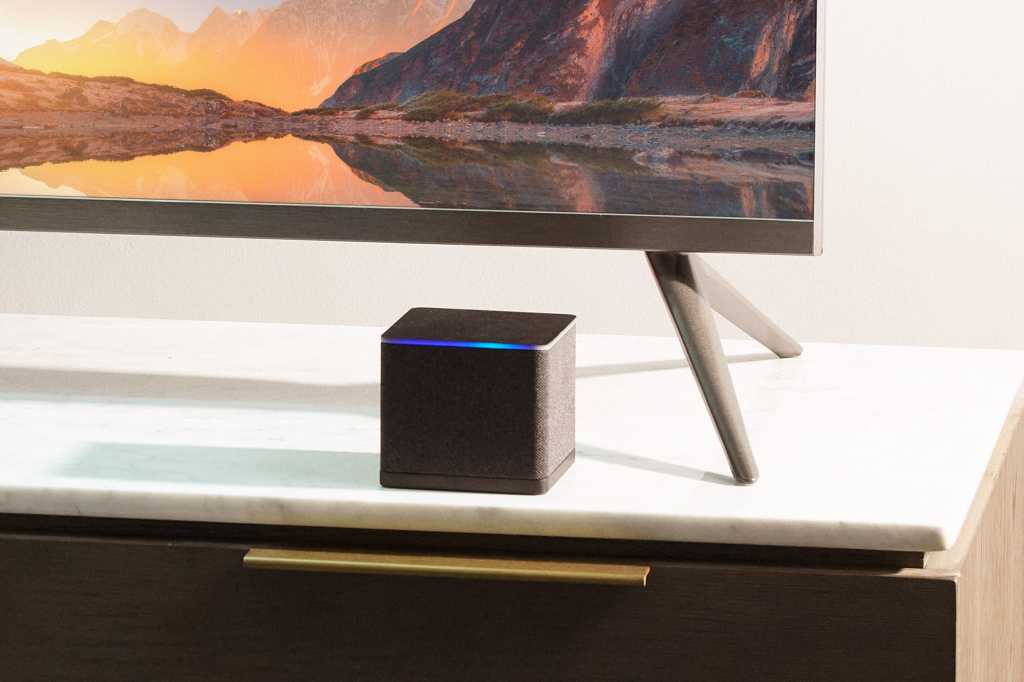 Amazon clearly did its homework before announcing a few new Fire TV devices this week.

Instead of inventing lots of wild new features, Amazon did what great artists do and leaned heavily on the ideas of others. From the 4K upscaling on the new Fire TV Cube to the backlit keys of the new Voice Remote Pro, Amazon took plenty of inspiration from a slew of other streaming devices.

I don’t think that’s a bad thing, either. If anything, companies like Roku, Apple, and Google don’t copy each other’s streaming ideas enough. A bit of shameless pilfering is just what streaming hardware needs to move forward.

The new Fire TV Cube: Cues from Nvidia and Google

Amazon’s third-generation Fire TV Cube is a $140 streaming box with some big upgrades over the previous version from 2019. It still has built-in microphones and speakers that respond to hands-free Alexa voice commands, but now it has a faster processor, a fabric-wrapped design, and support for Wi-Fi 6E.

But the most interesting new feature is lifted straight from the 2019 Nvidia Shield TV: With “Super Resolution Upscaling,” the new Cube can automatically convert HD content to 4K so it looks sharper. While Amazon is being cagey about how this works, the Shield’s AI-based upscaling has made a significant difference in my experience, especially over the more basic upscaling in most 4K TVs.

The new Fire TV Cube also revives the idea of HDMI passthrough for streaming devices, letting you control compatible cable or satellite TV boxes without switching remotes or inputs. The concept came into vogue about a decade ago, first with the original Google TV platform, and later with the Xbox One, but never really took off. Amazon may fare better, though I wish the company had included a coax input for antennas instead.

Amazon borrowed a couple of ideas (and a name) from Roku’s Voice Remote Pro for its own premium remote, including two programmable buttons that you can map to any Alexa voice command and a remote ringer function that you can activate from other Alexa devices. And while it doesn’t offer private headphone listening like Roku’s remote, it does have a headphone button that links to the Fire TV’s Bluetooth menu, so you can pair external headphones or earbuds.

The new remote also restores a couple of creature comforts from cable, including backlit keys and channel up/down buttons for the Fire TV’s live channel guide. Backlighting is especially rare on streaming remotes; Nvidia’s Shield TV remote is the only one I’m aware of that offers it. The Alexa Voice Remote Pro will be a $35 add-on to any existing Fire TV device, including the new Cube.

The Fire TV Omni QLED is a high-end television that Amazon doesn’t want you to turn off. It’s Amazon’s first TV to feature an “Ambient Experience,” showing artwork, photos, or informational widgets from Alexa when you’re not actually watching anything.

That sounds useful, but it’s also not original. Samsung’s The Frame TVs popularized the idea of displaying artwork on an idle screen, and Google beat Amazon to the punch with a revamped “Ambient Mode” screensaver on Google TV devices. Just like Amazon’s version, it lets you scroll between informational widgets, control music playback, and view artwork or your own photo collection. Amazon’s new TVs cost $800 for a 65-inch version, or $1,100 for a 75-incher.

In case you think I’m being dismissive, I’m glad Amazon is borrowing the best ideas from other streaming device makers, or even from cable boxes.

For years, I’ve heard from readers who want a streaming remote with backlit buttons, but don’t want to pay $150 for an Nvidia Shield TV. And while the lost-remote function on the Roku Ultra remote is useful, it’d be even better on devices with slimmer remotes that are more likely to get lost in the first place. (Looking at you, Apple TV.)

There’s room for other device makers to copy from Amazon as well. Its idea to use Echo Dot speakers as Eero Wi-Fi extenders is downright brilliant, and may solve a lot of streaming headaches, and it’s leading the way on bringing video chat into the living room with the new Cube’s full-sized USB port and Zoom integration. Even the Fire TV remote’s live TV button ought to inspire similar features from other streaming players.

My sense lately is that streaming devices have stagnated. Google’s newest Chromecast, for instance, is worse than the one it already offers, and Roku could muster nothing more than dual-band Wi-Fi and a storage boost for its next-gen Express budget streaming player. Last year’s Apple TV 4K did little more than fix the previous version’s much-maligned remote, and it’s unclear if we’ll see a new Nvidia Shield to push high-end streaming boxes forward.

Perhaps Amazon’s act of feature theft will be a kick in the pants. If all of the competition’s best ideas are getting stolen, I hope they’ll finally come up with some new ones.

Sign up for Cord Cutter Weekly to get more streaming insights from Jared every Friday.