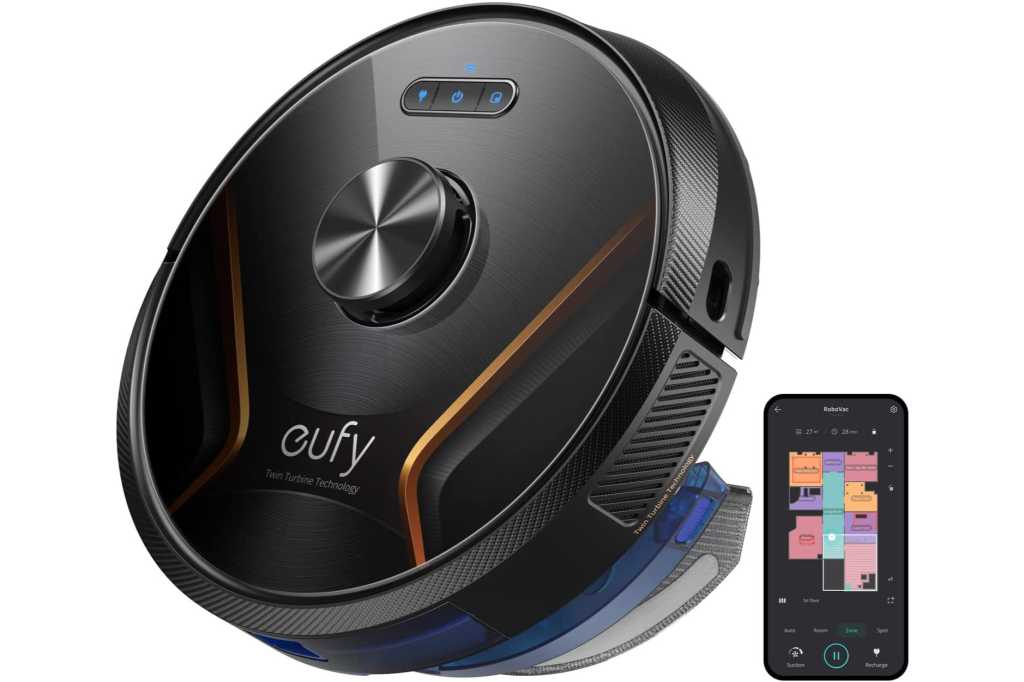 Eufy
At a glance

The Eufy Robovac X8 Hybrid is a competent cleaner, but given its unimpressive mopping performance, the mopless version–Eufy’s RoboVac X8–might be a better investment.

We’ve reviewed our share of Eufy robot vacuums here at TechHive, and the brand is generally known for producing high-performing, budget-priced cleaners. It was a little surprising to learn, then, that its new RoboVac X8 Hybrid was being offered for a whopping (by Eufy’s standards) $550. A glance at the spec sheet made things clearer: Unlike the stripped-down Eufy models we’ve used in the past, this vacuum-and-mop Hybrid includes more premium features, including multiple map support, room and zone-specific cleaning, and other cleaning-customization features. A vacuum-only version, the RoboVac X8, is also available for $499.

That this is a new type of Eufy robot is immediately apparent in the design. The X8 breaks a bit from the round-and-black look of many of its past robot vacuums by adding a pair of gold and black lines on each side of its lid. Each line angles in to point at a prominently placed Eufy logo. It’s not a terribly attractive design touch, but it does give the X8 Hybrid a more premium appearance than similar products.

This review is part of TechHive’s in-depth coverage of the best robot vacuums.

A small panel of buttons for docking, auto cleaning, and spot cleaning sit on the top of the robot above its laser turret. On the underside are a rubber-and-bristle roller brush, a spinning side brush, and the robot’s various sensors and wheels. Slotting into the back is a 400ml dustbin that uses Eufy’s UltraPack Dust-Compression Technology, which the company says increases dustbin capacity by 127 percent as compared to its RoboVac 30C. Essentially, it compresses collected dust more tightly, allowing the X8 hybrid to maximize bin space. It has the added benefit of preventing a plume of dust from escaping whenever you open it.

The X8 Hybrid pairs with the Eufy Home app to support its many cleaning customization features. Setup is straightforward: Once you download the app and create an account, you just need the X8 Hybrid from a list of Eufy products. The app immediately recognized my robot and my Wi-Fi network and prompted me to log in to the latter to connect the two.

The robot maps your space during the first cleaning job. You can view the in-progress map in the Eufy Home app, which also reveals the robot’s methodical cleaning pattern. It starts by patrolling the perimeter of the room and then slowly fills in this virtual outline by vacuuming in an up-and-down S-shaped path. When it finishes, you have a completed map.

Unlike some robot vacuums, the X8 Hybrid does not automatically create room divisions on the map. Instead, you must edit the map manually. To divide the mapped area into separate rooms, you select a portion of the map and then maneuver a resizable line into place. This seems simple enough, but in practice it can be maddeningly difficult to do on a smartphone screen. The precision required to turn, resize, and position each line is tough to accomplish with a thumb or finger, and you frequently end up with crooked lines in the wrong places. Merging two rooms is much easier; you just select each one, hit the “merge” button, and confirm your choice.

It would be understandable if a user wanted to give up trying to separate their bedroom from the bathroom, but it’s worth the effort to see it through. An accurate map enables you to send the X8 Hybrid to clean individual rooms as needed rather than your whole living space. Similarly, you can zone-clean within each room. For this, you just need to drop a resizable square over an area of the room to create a zone. No-go zones, no-mop zones, and virtual boundaries can all be added to the map as well, all of which will be retained between cleaning jobs.

Most vacuuming and mopping robots are better at the former than the latter, and the X8 Hybrid is no exception. Its vacuuming performance was above average in my testing—it removed dust, dirt, food crumbs, and pet hair from my hard and carpeted floors with no trouble, leaving not even a speck behind. Emptying the dustbin, you can see the dust compression technology at work, with lighter debris like dust and hair clustered at the center of the bin and heavier debris around the sides.

The X8 Hybrid’s mopping performance was less impressive. To prepare for mopping jobs, you need to fill a small, flat, water tank with tap water, dampen and attach a microfiber cloth to the bottom of the tank, and snap the whole apparatus to the bottom of the robot. As the robot vacuums, it drags the mopping cloth across the newly swept floor. What you get is more of a light wipe-down than actual mopping, as there is no scrubbing applied to the floor surface to remove embedded dirt or stains. Mopping is further hampered by the fact that you can’t control how much water is used, unlike some competing products. Critically, there’s no option to just mop, only vacuum and mop in tandem. That makes it essential to set up those no-mop zones if you have areas you don’t want to be drenched, such as a throw rug in the middle of your hardwood-floored living room.

The Eufy Home app is intuitive to use and puts the most important features, like cleaning modes and suction levels, as well as your current map, on the main screen. The duration of the current cleaning job, the square footage of the area covered, and the robot’s battery level are also displayed here. You can access other features such as cleaning history, scheduling, and map management in the settings menu.

In all, the X8 Hybrid is a competent cleaner with an attractive set of customization options. Seeing as mopping is its weakest feature, though, it’s worth considering the mop-less model X8 and saving $150 if you don’t absolutely need a robot that does double duty.