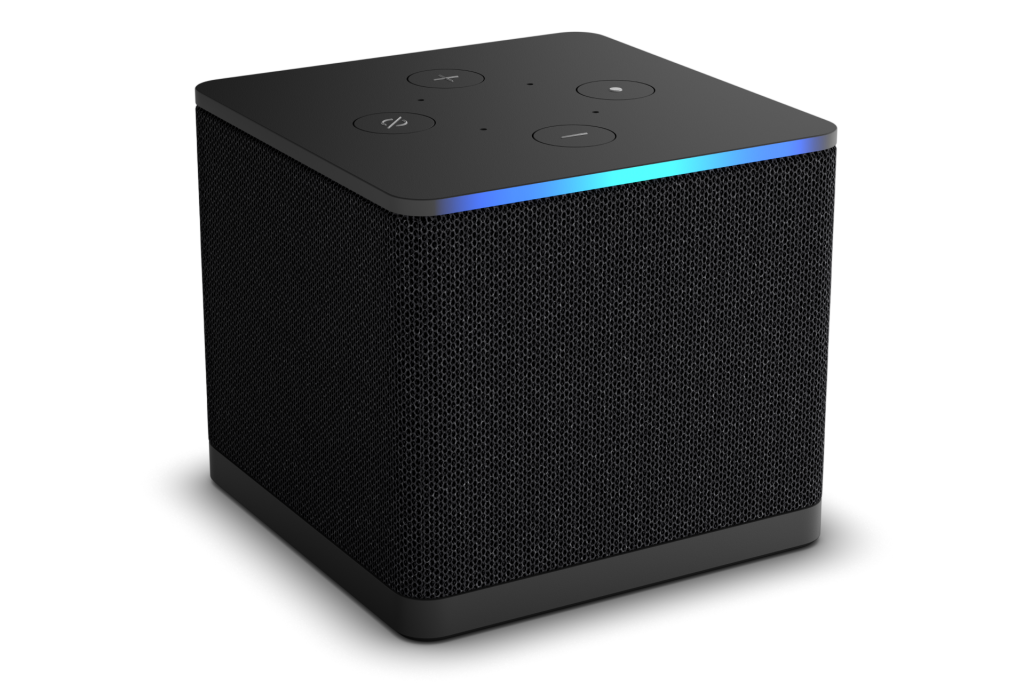 During its annual hardware event today, Amazon also unveiled a new Alexa voice remote that boasts a remote-finder feature along with a pair of programmable buttons.

Available now for pre-order, the $139.99 Fire TV Cube has a new fabric-covered, curved-edge design, while under the hood sits an octo-core 2.0 GHz processor that Amazon claims is 20-percent faster than the chip in the second-gen Fire TV Cube. That new processor should boost app launching times as well as smooth out the performance of the Fire TV interface.

Besides the new octo-core chip is support for Wi-Fi 6E, the promising new Wi-Fi standard that employs the recently opened 6GHz frequency band, good for boosting 4K video streaming performance. That’s a first for a video-streaming device, Amazon says, although it’s worth noting that the Fire TV Cube’s Wi-Fi 6E support won’t do you much good unless you have a Wi-Fi 6E router to go along with it.

Also new is the HDMI input, which will let you connect game consoles, Blu-ray players, and–most importantly–“compatible” cable boxes to the Fire TV Cube, meaning you’ll be able to ask Alexa to tee up ESPN on cable without having to switch video inputs first.

Alongside the HDMI input is a new USB-A port for connecting external media storage or a webcam, allowing you to ask Alexa to play local files or place video calls, while a new ethernet port enables wired internet connections.

As with the previous-gen Fire TV Cube, the new model supports both Dolby Vision and Dolby Atmos.

Meanwhile, Amazon had a new, “premium” Alexa voice remote to show off at its annual hardware event Wednesday.

Available now for pre-order, the $34.99 Alexa Voice Remote Pro boasts a trio of key features, starting with a remote-finding feature that lets you track down the wand if it slips beneath the sofa cushions.

You can just say “Alexa, find my remote” and an integrated speaker will emit a “loud audible ring” to guide you in the right direction. You can also activate the remote finder by pressing a dedicated button in the Fire TV app.

Next up is a pair of buttons that you can program with one-touch shortcuts for favorite channels, streaming services, apps, or even Alexa routines.

For example, you could program one button to launch Netflix, while the other could trigger an Alexa routine that dims the lights, lowers your window shades, and turns on the TV.

Last but not least, the Alexa Voice Remote Pro has backlit buttons that light up automatically when the wand is picked up in the dark.